Biking the Dutch dream: The Dutch and their bikes 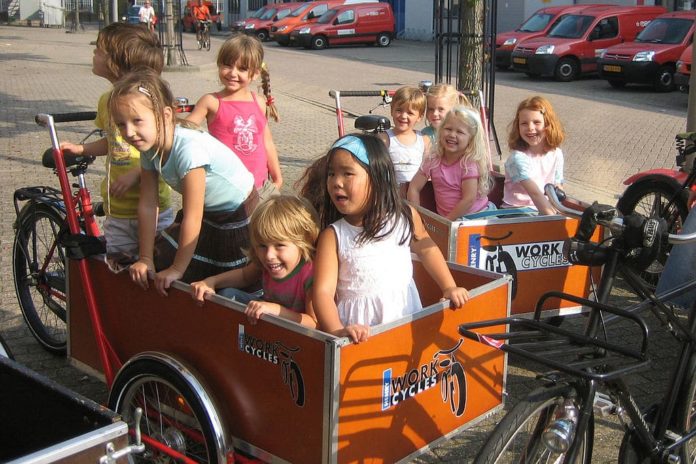 The Dutch and their bikes

Everything you’ve heard about the Dutch and their bikes is probably true.

Ecologically sound and supported by a solid infrastructure of connected paths, Dutch bikes buzz along through the fresh air with a slight hint of old-time glamour, offering easy and convenient car-free travel around a flat country. In a changeable world, traditional bikes, the omafiets, opafiets, and bakfiets, remain intrinsic parts of Dutch life.

And the people riding them tend to be smiling.

Even the kids know how it’s done.

The Dutch word omafiets translates to English as Grandmother’s bike. I have been riding one since last October.

You have to sit up straight when you’re riding an omafiets. The classic roadsters’ heavy black frame and wide comfortable seat demands good posture, and if you want to fit in, you ride the omafiets bare-headed. The Dutch do not wear helmets. I guess they missed the memo
about concussion, they seem to prefer the wind running wild through their hair.

I have to admit it feels pretty good.

The name omafiets suggests a lack of style, and I had to wonder, who would be caught dead on their grandmother’s bike?  But the omafiets is not nearly as stodgy as its name implies. Equipped with back brakes, one speed, saddlebags, and baskets, they embody a gracious classic style fused with function. You can look good on an omafiets while hauling your friends, your animals, or even small pieces of furniture, all while you bring home the groceries.

To my American eye, the omafiets has an Oxbridge-ey, Brideshead Revisited sort of look. I half expect black-gowned undergraduates to swoop Harry Potter-like through the streets of our Dutch town, which my daughter says looks like a fairy tale village anyway, complete with
thatched roofs and herringbone patterned brick pavement. The bricks are highly bike-able. If you see bricks, you have probably found a fietspad, or bike path, the natural habitat of the omafiets. There are fietspads in the Netherlands wherever there are roads.

If you’re going to get an omafiets go for an old one. Flash new ones get stolen.

While Holland generally has a low violent crime rate, it does have an omafiets theft problem. My bike’s rear tire involves a built-in lock system, which activates with a key. I’ve been strongly advised to lock my bike whenever I’m not on it, anywhere, even in our own bike shed. Bike sheds are as ubiquitous as the omafiets, and while cars are left outside in all weather, the omafiets gets tucked in at night.

If the omafiets has a partner, it is the opafiets, which translates as grandfather’s bike.

The opafiets is distinguished by its crossbar. Both bikes work for individual transportation with goods, but if you need to move the kids as well, the Dutch still have you covered. The bakfiets is specially designed to haul the kids around with a large front box-like compartment, or bak. I have not ridden in the bakfiets, but my daughter has, and she tells me it’s terrifying due to its speed and close proximity to the ground.

I’ve been following the fietspad on my omafiets for two reaons.

Definitely because it’s fun, but also because I will bike a long mile to avoid driving here.  I have managed to avoid driving overseas for many years, as it seemed all too frantic an exercise. But now I have had to step up to the plate and become a real euro-driver, which feels like every man for himself as huge pan-continental trucks resist my attempts to merge onto highways, and cars speed through village streets too narrow, congested, and completely full of bikes carrying denizens of all ages.

The Dutch are bike crazy

Pizzas and the daily mail are delivered on bikes. There are babies and small dogs clinging to handlebars and kids riding pillion. Some bikes are motorized and some are actually Vespas.

The Dutch are as home up upon their bikes are they are in their living rooms.

The bikes have right of way, and they assert it boldly, so when driving the car my main goal is to not hit a bike. I count it a good driving day when I successfully navigate new roads and manage to park the car without having hurt anyone. I figure I am much better off on my trusty omafiets and I think I know why the Dutch are so devoted to theirs. The Dutch are having fun.

What do you love about biking and the Dutch and their bikes? Let us know in the comments! And don’t forget to join our Facebook group!

Mary Petiet
Mary Petiet is an American writer, poet and reporter. She is a recent transplant from Cape Cod, Massachusetts. Mary can be found on her bicycle, in a cafe, or online at www.marypetiet.com, where she chronicles her adventures on her blog #DutchScoop.

Looking for a little diversion from reality? How about a mesmerising video of Amsterdam circa 1922 — in colour! The city...