Feeling blue today? Don’t fall ill to the pseudoscientific claims of a now-defunct holiday travel gimmick that claimed Blue Monday — the third Monday of January — is the “most depressing day of the year.” Just because someone can do some random math on a several arbitrary variables like time since failing new year’s resolutions, motivation level, and others, doesn’t mean you need to approach the date with any added caution than another day. 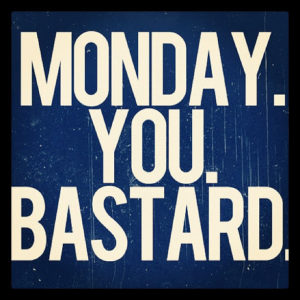 It would simpler to conclude that the shortest day of the year, December 21 in the northern hemisphere, which is the winter solstice and has the shortest period of daylight, might be the date at highest risk for being the most depressing. Why? There’s a condition called Seasonal Affective Disorder, aptly abbreviated SAD, which actually has a clinical definition: meeting criteria for major depression, but only appearing during winter months and cycling this way for at least two years. And treatment usually involves the very low-risk treatment of light therapy.

In the Netherlands, it’s interesting to note that while the number of days with sunshine is comparable to, or even higher, than places like California in the U.S., the percentage of sun on those days is way less. That said, the third Monday of January has zero special relationship in terms of the amount the sun or sadness one is exposed to.

But, if you’re still looking for some easy early-in-the-year pick-me-ups, here’s a few you could try, at your own risk:

1. Eating oliebollen: Such a beloved form of food therapy that a fellow Dutch Reviewer crafted an Ode to Oliebollen. And when has deep fried dough plus sugar ever failed as a way to make you feel like a happy glutton? Stroopwafels are an appropriate substitute any time of the year.

2. Shopping post-holiday sales: Retail therapy is a classic treatment, assuming the financial means to do so. It might be a better idea to start this treatment preventively, well before the third Monday of January, in order to garner the best deals and feeling like a super-smart consumer like a true Dutchie would.

3. Exercising? Umm, yes, so this is what medical recommendations would say any time because of exercise-induced endorphins and so on. There’s no problem — and in fact many benefits to — setting some goals and being realistic about achieving them. (here’s a way to find a gym in Amsterdam if you’re traveling through)

What do you do to battle your blues?