The Dutch have a strange relationship with food. It’s a constant struggle with eating well, in terms of nutrition, but also in terms of taste. The average Dutch kitchen is stocked with bread, and more bread. There’s milk, cheese and lots of cold cuts too. Potatoes are, of course, in abundance.

All this food goes well with a couple of hours of biking every day, but it doesn’t really go well with a food connoisseur.

In fact, you don’t have to be a food connoisseur to be disappointed with the Dutch offering: you just have to like ‘good’ food. Like my friend says, it is practical for the Dutch to grab a quick bite and sure, sometimes it is.

But, I refuse to have bread three times a day.

Why not good food?

In the culture that I was raised and in the places I have travelled, good food is an essential part of life. It brings vibrancy and warmth, gets people together and is a labour of time and love.

Dutch fries are great and so are the croquettes, but sadly, deep-fried goodness isn’t enough to sustain your daily diet. Considering the Netherlands is one of the global suppliers of food, I would argue it’s essential to make food tempting, flavourful and a highlight of your stay in the Netherlands. I don’t know if I have the vote of the locals on this or not.

The Dutch relationship to food

When you spend some time in the Netherlands and you get to eat and mingle with the locals, you realize that food is not considered the topmost priority. Yes, an occasional stamppot is good, and some pizzas are ordered in after a night brimming with beer, but that is about it.

I firmly believe if all Dutch people were sent to prison or hospitalised they wouldn’t even struggle with the food offered to them. In fact, they would be delighted — more so because it will be free. They don’t really care about the taste (this is a massive generalisation on my part, but it’s the truth!) and they love freebies (who doesn’t), so double whammy!

I read online that it is truly ironic that despite being the largest traders in spice, Dutch food has anything but that. I have a different theory about this: when the Dutch started trading in spices, they were weighed in gold or were extremely expensive. You can’t expect them to make something that is just so expensive a part of their regular diet. The Dutch are not particularly famed for their willingness to spend money. 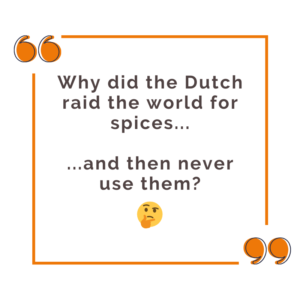 Food in the future

On a serious note, the Dutch relationship with food is ever-evolving. In recent decades, thanks to a massive influx of expats, the palate is tilting towards more flavourful food than ever before. There has been an increase in the number of new eateries offering a wide array of tastes and flavours from all parts of the world: think Lebanese, Turkish, Mediterranean, Asian, the list goes on.

You can now see that along with Turkish cuisine, like doner, which has been popular for some time here, there are many options available for the foodie to choose from. You can now get decent Thai food at various places, and the concept of food halls (foodhallen) has definitely broadened the horizons.

A walk down Markthal (the famous food hall in the centre of Rotterdam) or a visit to the Foodhallen in Amsterdam or The Hague offers diverse options from around the world. You can now see an accentuated flavour of the Middle East, India and the far east but also more regional cuisines like Scandinavian making it to the mainstream. There has been an increase in people coming from all over the world, and that is getting reflected in the local cuisine.

The Dutch take on international food

The most exciting part is that the global cuisine is expressing itself in local terms. The Dutch love their bread and these flavours from all over the world are using the popularity of the bread to their advantage.

There is now a broodje (sandwich) available in almost every cuisine. These broodjes are not only well-received but have also changed the local palate significantly. The Dutch are going from cold sandwiches with limited flavour options (a slice of cheese and cold cuts), to an international affair.

Vietnamese broodjes (such as the one you can grab from Mama Hongs in Rotterdam), Lebanese wraps (The Lebanese Sajeria in Amsterdam does particularly good ones), or Roti wraps (Rottiedam in Rotterdam) are popular among the international community and the locals alike.

If this continues, the reputation of the Netherlands will soon change from a boring food destination to a rather exciting one. Kudos to the people who are continuing with their passion for food in this bumpy terrain.

What’s your opinion on Dutch cuisine? Have you seen a change in the works? Let us know your thoughts in the comments below!

Feature Image: Kaboompics.com/Pexels
Editor’s Note: This article was originally published in February 2020, but was fully updated in April 2021 for your reading pleasure.

Ahmer Ashraf
Ahmer, a native Pakistani, former journalist, former corporate cog, incessant traveller and experimental chef now lives in Rotterdam where he is working hard on his startup to stop food waste. He loves conversations with people, walking in the city and tasting unique flavours.

Hold up — sororities and fraternities in the Netherlands? Isn’t that an American thing? Well, it’s kind of complicated, but...
Culture

It's a running joke that Holland is flatter than a stroopwafel, but have you ever wondered what maps of the...
Art