Living in the NetherlandsCultureSociety
November 27, 2020 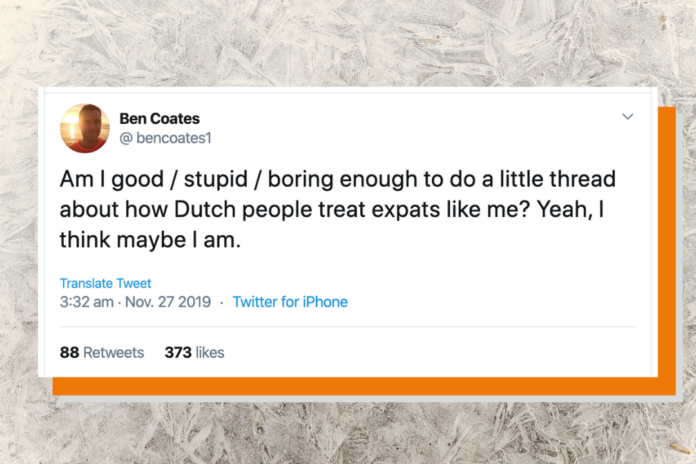 What’s it really like to be an expat in the Netherlands? Are you welcomed with open arms to the land of the tall, or shunned for being different?

Despite the Dutch’s typically overwhelmingly liberal and tolerant attitudes (to drugs, sexual orientation, and religion to name a few), attitudes towards foreigners can sometimes leave much to be desired.

With huge amounts of people moving to Holland, life for expats must be pretty good, right? Well, maybe not. How the Dutch are Different author Ben Coates once caused a Twitter-storm when he answered that question based on his own experiences.

Am I brave/stupid/boring enough to do a little thread about how Dutch people treat expats like me? Yeah, I think maybe I am.

Coates started off with a few compliments. In management speak that’s called a “feedback sandwich.” In normal-talk, we call that “I like you — buuuuuut.”

And here’s the but.

Ouch! That’s a mighty big ‘but’, and we cannot lie. We know that living in the Netherlands isn’t all tulips, bikes and sunshine (the last one for sure), but Coates does bring up a pretty solid point about how the Dutch act:

Wait a second, this is a white male criticising his host country that he’s so fortunate to live in! Get out the pitchforks, the permanent markers and the angry…oh, he knows it. Good on ya Ben!

As an educated white guy I know I don’t have much to complain about, compared to (say) a Muslim immigrant who cleans houses for a living. But my inbox these days often overflows with abuse.

Keyboard warriors are the worst. There’s something about hiding behind the mass of technology that is the internet that lets people think they can say whatever they want — with no consequences.

It’s worse on social media, of course, but also happens in real life, more than you’d think. The rule often seems to be: “you’re free to hold any view and voice any opinion – unless you do it in a foreign accent”

He’s definitely got a point. Without going into the expat versus immigrant debate (because that’s a whole other can of worms), we already know that Dutch directness can get pretty unpleasant sometimes.

For Coates, a recognised expert on living in the Netherlands as a foreigner, he says the attackers are not limited to a minority, which is particularly concerning.

And it’s not just far-right types. A surprising number of people are proudly pro-equality, anti-PVV, #FBPE etc – but also think house prices are too high because of tyfus foreigners who should f*** off back where they came from

According to Coates, Dutchies tend to measure the behaviour of all foreigners by the actions of just a few. Coates argues that most expats in the Netherlands actually do attempt to integrate themselves into Dutch culture.

And those foreigners a surprising number of you rail against? They work for your companies. They teach your kids. They pick your sprouts and fix your cars and design your websites and build your houses. They pay taxes.

Obviously, as a bunch of expats running a website targeted towards expats we could be a little biased in supporting Coates — but, we think he does make a valid point.

By all means, disagree and complain if you want to. But please, don’t claim to cherish and defend liberal values while doing your best to undermine them. Don’t judge. Don’t hate. Be kind. pic.twitter.com/i2q76B9oSi

So did he unleash the full dragon of Dutch Directness? Or did Dutchie’s come to him with open arms, tears in their eyes, and say “Het spijt me”? Well, a lot of both to be honest.

On the one hand, quite a few Dutchies and ex-pats came out of the woodwork to agree with Coates. It opened up lines of communication, and a lot of Dutchie’s actually came out in support of Coates.

Thank you sir. Well observed and well put. This famous 'tolerance' of ours (dating back to 17th cy) only ever held out if it was economically advantageous to us, anyway.

Some other expats also joined in with some examples of xenophobia they experienced while living in the Netherlands.

As a French woman married to a Dutch man, I couldn't agree more. Some people even told my husband, in front of me, that there are too many people coming to live in the Netherlands… 1/2

But, this is Twitter, and of course, some Dutchie’s didn’t quite agree with Coates’s thoughts on his new country.

When you’re a foreigner and criticize another culture you should not be surprised being criticized yourself. It’s a normal defense mechanism in every culture. So don’t whine or complane.

And, of course some people took it a little too far (although perhaps helped prove Coates’s point along the way? (P.S. Language warning for the screenshots in the following Tweet)

Pleased to announce that 36 hours after voting opened, we have a winner of the prize for ‘Most Hysterical Response To A Fairly Thoughtful Thread’. Congratulations, @CHADinAMSTERDAM ! Hope you enjoy your prize: a copy of both my books, which I think you’ll love. pic.twitter.com/XEADQF9vc3

As expats, it’s always concerning for us to hear that our own are being mistreated; and we’ve been subjected to the wrath of Dutch directness once or twice before.

What’s it really like to be an expat in the Netherlands? We’ve asked our readers

We opened up the question to our own Facebook group (get over here and join if you haven’t already!) and thankfully none of our members had experienced much hate.

“They treat me like one of their own,” said Marie, who says she’s made herself at home in the Netherlands. “Frustrations? When they hear a *hint* of an accent they switch to English. This happens me less where I live and more in De Randstad.”

Switching to English is one of the more common woes among group members. However, many reported only good things.

“I love it. Feels like home most of the days,” said Liana. “Dutch people: super sweet, honest and kind. They are the best.”

Whew! While Ben Coates’s experiences are certainly not limited just to him, it’s a relief to know that it’s primarily keyboard warriors who are giving the Dutch a bad name.

What have been your experiences of living in the Netherlands as an expat? Have you found Dutch people to be welcoming, or downright standoffish? Tell us your thoughts in the comments below!

Feature Image: Ben Coates/Twitter
Editor’s Note: This article was originally published in December 2019, and was fully updated in November 2020 for your reading pleasure.

Mental healthcare in the Netherlands is more important than ever before, with more people coming forward to talk about their...