Like a native: 21 ways to elevate your everyday Dutch phrases

Whether your feet have just touched Dutch soil or you have been living in the Netherlands for 20 years — the prospect of learning this wonderfully guttural language can be a scary one.

While you may be listening in to conversations that consist of multiple “ooh”, “ghuhh”, “aggh” sounds and thinking, “nope, never going to compute.” It is indeed possible for you to engage in a Dutch conversation. Let’s run through the basic components of a basic Dutch conversation: “hello”, “how are you” and “goodbye!”

To help you sound like a native, we’re turning to a Dutch language expert. We’ve teamed up with the wonderful Mirko from TaalBoost, a Dutch language school based in Amsterdam. Here’s the man of the hour.

How do you say “hello” in Dutch?

There is this funny story about how the rather recent word “hello” came to usage in the English language. With the emergence of the telephone some 150 years ago, two rivals Thomas Edison and Alexander Graham Bell used and promoted different ways of answering a phone call. Where Edison succeeded to put “hello” in widespread use, Bell advocated for the nautical term, “ahoy.”

The Dutch must have thought — why not both? — as nowadays the customary words used to greet someone in the Dutch language are precisely hallo and hoi. Both words can be used interchangeably, or even together.

Tip: while it’s standard to greet someone in non-formal situations by saying either hallo or hoi in Dutch, it’s not common to use those words while actually answering the phone. Most Dutchies introduce themselves by saying their (first) name immediately after they pick up a phone call. For example, I would say “met Mirko”, which is short for “u spreekt met Mirko” (meaning “you are speaking with Mirko.”)

Hoi is an informal greeting. When addressing more people at the same time, one would generally say “hoi allemaal” or “hallo allemaal” — which is Dutch for “hi y’all.” Other informal ways of saying hello are hé (pronounced as hey), hai (pronounced as hi) and ha.

Luckily, most daily encounters are also informal encounters in the Netherlands — unless you are talking with a person much older than you, a civil servant, or a member of the royal family (but who knows, maybe you’ll stumble across King Willem-Alexander one day in the Westerpark.)

Should you find yourself face to face with a royal family member, it is best to remember that in a formal situation, you are not expected to use hoi or any other greeting mentioned so far. To be on the safe side, use goedemiddag (meaning good afternoon), goedemorgen (good morning) or goedenavond (good evening) — depending on the time of day.

A shortened version of goedemiddag is dag, which can be used both formally and informally. If you feel like tipping your hat and curtseying more often, “dag meneer” (meaning good day sir) or “dag mevrouw,” (good day madam) are a common way of addressing people formally.

How do you ask “how are you” in Dutch?

That world-famous Dutch directness is surprisingly absent when it comes to asking someone how they’re doing. In Dutch, you don’t actually ask the person how they are, but how things are going, or how life is generally. This is conveyed by three words: “hoe gaat het” (how is it going) or “hoe is het” (how is life/how are things).

“Hoe gaat het” — three words for a variety of situations

Although the right pronunciation of “hoe gaat het” can be somewhat of a challenge, the usage of these three words is fixed and used across the board: whether you are addressing one person or multiple persons, in formal or informal situations, speaking to a person directly or referring to someone else — it’s always “hoe gaat het.”

“Hoe gaat het?” is an open question. That means that you can answer anything in the wide range from uitstekend (outstanding) to verschrikkelijk (terrible). But beware, the phrase is a conversation starter or a useful small talk tool — people aren’t actually expecting you to share your deepest, darkest worries.

“Alles goed?” An essential Dutch phrase — simple to both ask and answer

You can avoid the open question, and ask whether things are going well by posing a closed question instead. Closed questions just need a mere ja (yes) or nee (no) as an answer — perfect for the sprouting beginner! You’ll find that these questions always start with alles and end with a raised intonation of the last word to make it sound like a question phrase: “alles goed?”, “alles oké?” and the more informal “alles lekker?” and “alles kits?”

If you’re looking for a more adventurous variation there’s also “alles Gucci?” (a popular phrase amongst the current generation of slang users). Another popular way of asking how someone is in slang is “fawaka” — borrowed from Sranantongo, one of the official languages of Suriname.

Seven ways to ask “how are you?” in Dutch

Still following? Great — now let’s listen over some of this new vocab! Here are seven ways to say “how are you?” in Dutch.

How do you say “goodbye” in Dutch?

The routine way of saying goodbye in Dutch is “tot ziens”, which literally means “until we see each other” and best of all, it can be used in practically any situation. I love the hopefulness and optimism contained by these two words as they imply that you will be seeing the other person again.

The more archaic variety of “tot ziens” would be “tot weerziens” (meaning, until we see each other again), while a more casual version would be “tot kijk” (same meaning.)

But let’s face it, nowadays it would be more applicable to say something along the lines of “we bellen” (we’ll phone), “we mailen” (we’ll email), or “we appen” (we’ll text).

Starting your goodbye with tot and then adding a timeframe to it would still be the most usual and a very productive way of parting ways. Don’t worry, you can still be non-specific if you like: “tot de volgende keer” (until the next time) or “tot snel” (until soon.)

How to say “goodbye” in Dutch — time specific

However, if you are one of those people who actually know what they will be doing a couple of hours/days/weeks into the future — like many Dutchies do — you can be more specific: “tot vanavond,” (until tonight) “tot morgen” (until tomorrow), “tot volgende week” (until next week), “tot straks” (until later) and “tot zo” (see you soon.)

A common confusion among fresh (and some seasoned) Dutch language learners is the meaning of straks or zo in Dutch. Although they would be translated as soon, in Dutch they are a very specific kind of soon — between ten minutes and three hours from now — better translated as the phrases “in a bit/while.”

How to formally say goodbye in Dutch

Just like goedemiddag can be used to formally say hello, it can also be used to say goodbye, but only in an extremely formal setting. Aside from the news anchors saying it at the end of the news (it’s that formal), I’ve never heard anyone under the age of 70 say goedemiddag or goedenavond when leaving in real life.

How most people say “goodbye” in Dutch

What you are much more likely to hear — basically from any cashier at a supermarket or at any store — is “fijne dag,” “fijne avond” or “fijn weekend,” meaning “have a nice day/evening/weekend.”

By the same token, you can use dag to say both hello and goodbye. The word is technically formal but there are ways to dress it down a bit. For example, you could double it as dag-dag, or you could transform it to doeg and finally doei. The word doei is by far the most common way of saying goodbye in an informal setting. Other informal ways of saying goodbye are later(s) and (a personal favourite) — joe.

Finally, out of all three phrases — “hello”, “how are you” and “goodbye” — saying goodbye has by far the vastest regional differences. In the province of Gelderland it is common to say ajuu(s), in North-Brabant houdoe, in Limburg and in the Randstad metropole area (especially Amsterdam and Rotterdam) it is not uncommon to hear de mazzel — a word borrowed from the Yiddish and Hebrew saying, mazel tov — which means good luck!

Congratulations, you’ve navigated a basic conversation! Now let’s listen over seven ways to bring it to a close and say goodbye.

Hungry for more Dutch conversation? Great! There are many ways that you can learn to master the Dutch language. Whether you want to tell your housemate about that weird dream you had last night or talk back when someone gets sassy with you in the cycle lane, the best way to improve your Dutch skills is to enrol yourself in a TaalBoost language course.

He is doing this together with a team of top-notch Dutch language teachers. When he is not at work, you will find Mirko at his happiest in the kitchen, or at Westerpark if it’s not raining.

Did you know all these Dutch phrases? What other fun conversation starters can you think of? Let us know some of your favourite Dutch vocab in the comments below!

Feature Image: Priscilla du Preez/Unsplash
Editor’s Note: This article was originally published in January 2021, but was fully updated in January 2022 for your reading pleasure.

Previous articleNot all victims of GGD data theft informed — likely many more than first reported
Next article‘Niksen’ like the Dutch: how you can accomplish more — by doing nothing 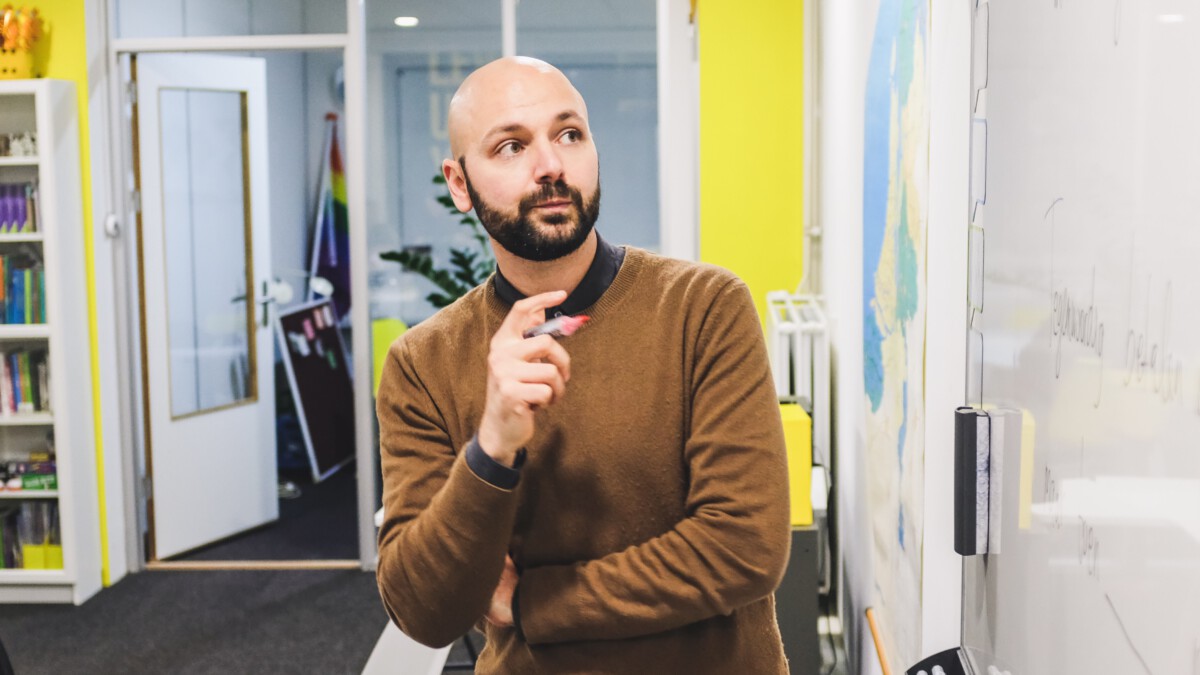 There are many weird and wacky sports in the Netherlands that will make you raise your eyebrows and question Dutch...
Environment

The coast is NOT clear. The National Institute for Public Health and the Environment (RIVM) advises everyone to avoid eating...
Health