Somewhere hidden in the picturesque alleys of Delft is a museum that combines great art with an illustrious history and some beautiful scenery to make the combination a succes. It’s also one of those museums in the Netherlands that makes you understand the country a bit better. Let’s have a look at what’s going on in Delft and why the Prinsenhof Museum is a must-visit!

I honestly can’t think of a more important place for Dutch history than the Prinsenhof in Delft. It all started in the 16th century when William of Orange (aka William the Silent) lived at the Prinsenhof and led the rebellion against the Spanish occupation of the time. Before that ‘The Court of the Prince’ was originally built as a monastery.

It’s because of William of Orange that we are 50% more orange minded than the rest of the world and celebrate stuff such as the ‘Leidsch Ontzet’. What makes the Prinsenhof an even bigger epicenter of Dutch history is that William was also assassinated here. In 1584 Balthasar Gérard, who was after a bounty set by the Spanish king, shot William at close range – giving William the dubious honour of being the first head of state ever to be assassinated by a hand gun. You can still see the bullet holes where it went down: 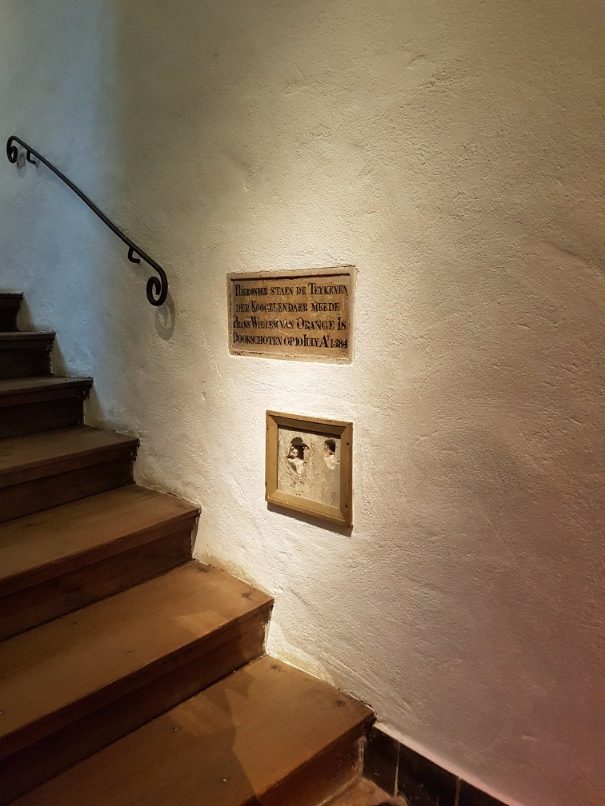 It’s no surprise that there’s a lot to learn at the Prinsenhof about this particular time of Dutch history. This is when we actually started being this country and also the pre-lude to the Golden Age. The Prinsenhof does a great job of telling this fascinating story by combining great art from that era with innovative movies projected onto the walls (all nicely available in English as well btw!).

It’s one of those towns most of you either know from a short visit to it’s renowned university or just by passing when taking the train from Rotterdam to Amsterdam. But trust me, make it a day trip once and combine it with the Prinsenhof. Delft is in the process of reinventing itself, the new trainstation is a welcome improvement and the neighborhood surrounding the Prinsenhof sees more and more hip and delicious places opening up. But what was always winning was the historical scenery, and nowhere is this done better than around the Prinsenhof. 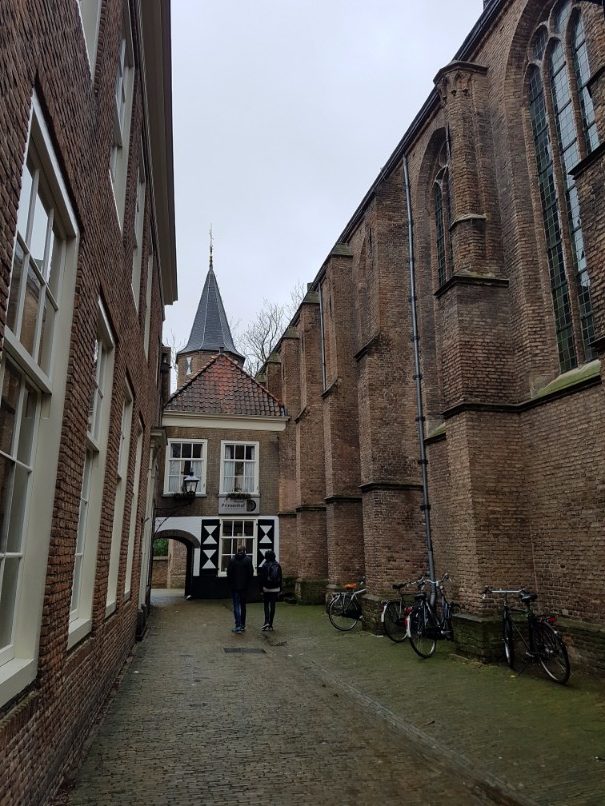 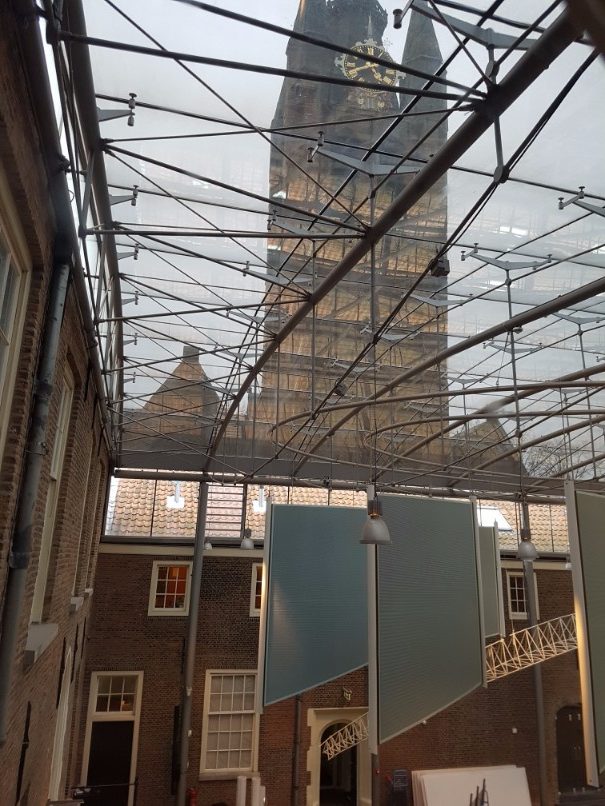 A personal favorite of mine every time I see it, is the leaning church tower. It’s also really impressive when you see it in the paintings from 400 years ago, not much has changed with that church tower since then.

Speaking about those paintings, lets have a look at the:

3. Impressive art collection of the Prinsenhof

Besides history and scenery, art is (of course) one of the main attractive points of the Prinsenhof. Their permanent collection consists of great pieces from the Golden Age era, a really impressive display of ‘Delfts Blauw’ (you could have seen this one coming) and work of art from a time when the Dutch where at the forefront of inventing stuff.

Personally I enjoyed the paintings more than I expected. Some of them really take you back to a different time, the immersion only gets better when you see these paintings of Delft which share quite some resemblance of the Delft of today. And of course there are the numerous paintings that just show of the wealth of the Dutch in that era.

Besides paintings the Prinsenhof can also boast an impressive collection of royal portraits (our royal predecessors are buried in the church next to the Prinsenhof) and an interesting collection of memorabilia related to Dutch inventors of the Golden Age, back when Delft was the silicon valley of the time.

And there’s plenty of interactive display’s in case you’ve got your kids along with you. Here’s the most impressive one in my opinion, which shows the origins of Delft’s porcelain:

Or this one which allows you to create your own Golden Age painting:

So impressive history, gorgeous scenery and a compelling permanent collection. Isn’t that enough to warrant a visit to the Prinsenhof in Delft?

The central hall of the Prinsenhof can house some of the best temporary exhibitions of the Netherlands. For this spring and summer of 2017 it’s the exhibition ‘Porcelain for the Forbidden City’, which started at the 9th of April and is running until the 9th of July. 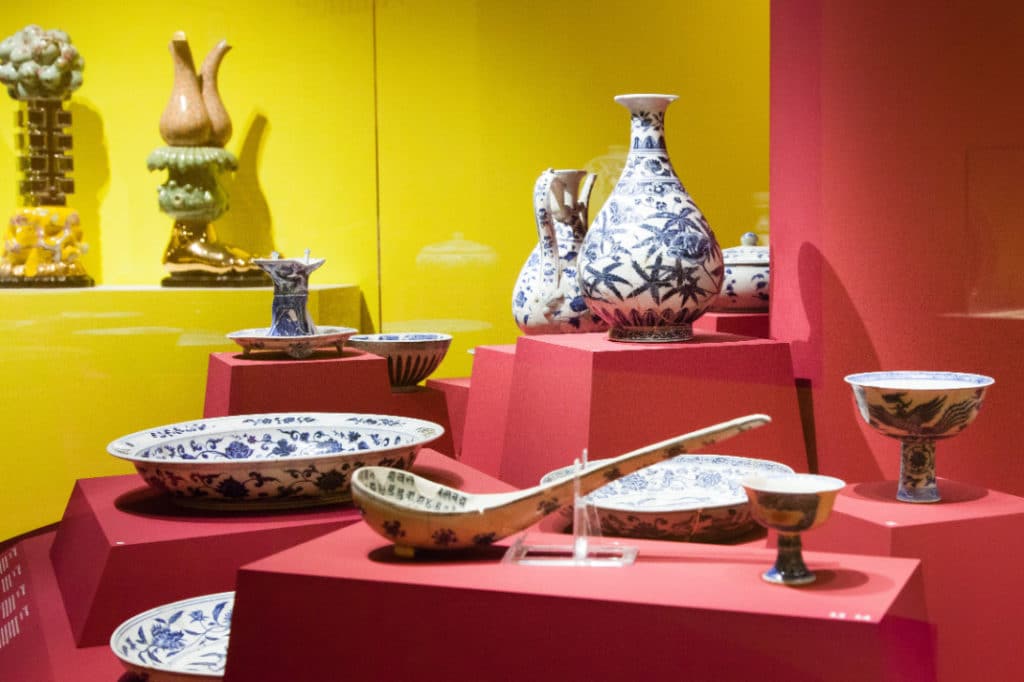 During the early 1980s, enormous quantities of ceramic were found at imperial sites in China. This archaeological discovery stunned the ceramic world: it was the earliest Ming-porcelain manufactured especially for the Chinese emperors. Fast forward 500 years later, in Porcelain for the Forbidden City, these delicately decorated objects finally can be seen outside of Asia for the first time at the Prinsenhof in Delft. 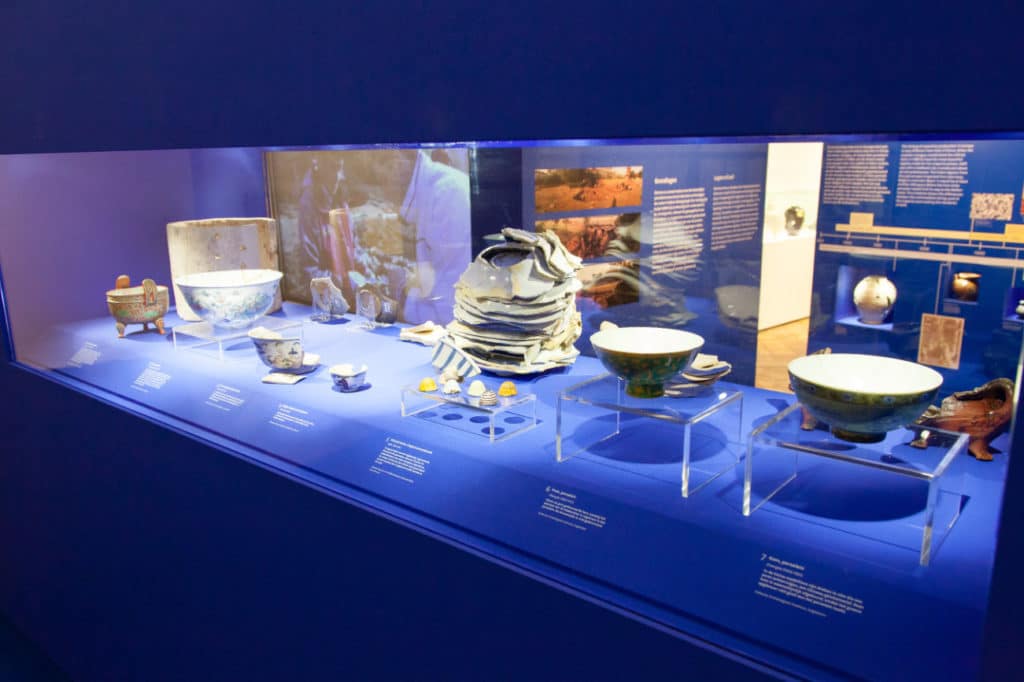 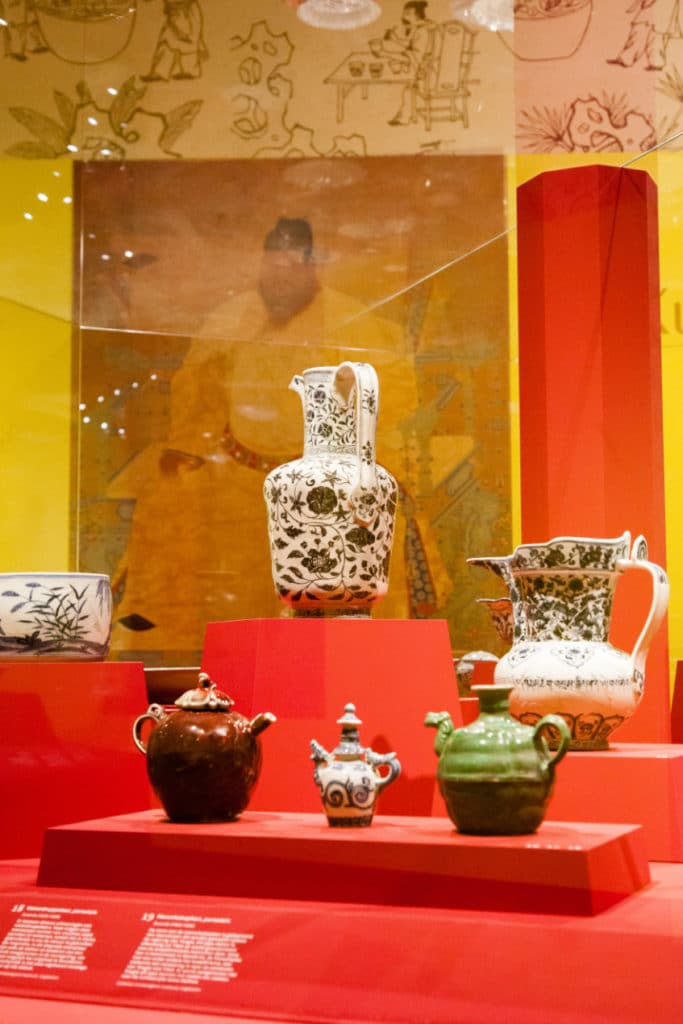 More than 120 objects from the Archaeological Institute in Jingdezhen and a number of outstanding pieces (on loan) from Dutch museums show how important porcelain was in the religious rituals at the Chinese court and in the expression of political and artistic messages by the (Chinese) emperors.

So plan that trip to Delft and the Prinsenhof! More info to be found here, and feel free to share your experience with us in the comments!