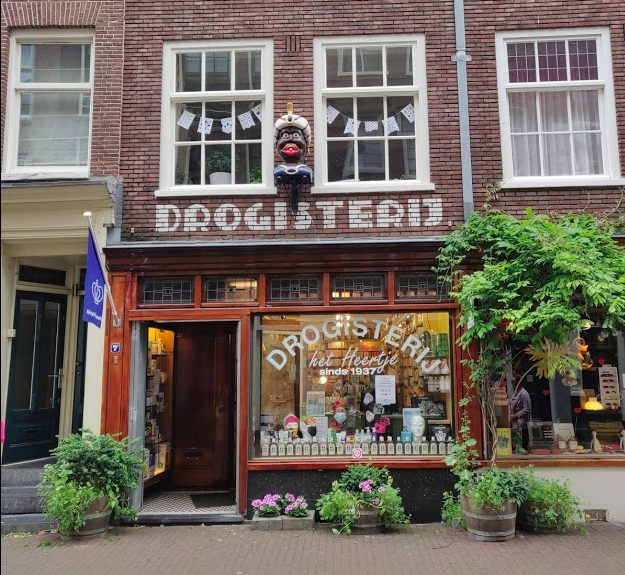 A drugstore in Amsterdam has decided to remove a statue of the head of a Black man from over its front door, following a Twitter storm.

The statue in question was a gaper, which usually depicts a Black or Asian man, often with a turban. Often, they have an open mouth with their tongue sticking out, and were used in the Netherlands from the 17th century onwards by drugstores to promote the quality of the shop. The use of Black or Asian men as statues aimed to advertise that the medicines from the shop were coming from far away: many 17th century medicines were made from spices traded from the Middle and Far East.

A few days ago, Volkskrant columnist Sylvia Witteman tweeted about the statue to her 170,000 followers: a tweet, she now says, that was meant as a joke. However, the humour was lost on some people. “My snide comment was taken seriously by a bunch of idiots. The residents are harassed and the gaper is taken away!”

However, the management of the drugstore does not seem fully sure if it has made the right choice. “My employees have no longer felt safe in the store in recent days,” said Harry Piet, the drugstore manager, to NOS. “There were no threats, but they didn’t feel good about people walking by or taking pictures.” Piet insisted that the statue had nothing to do with racism or slavery, and is looking into ways of getting the statue back up, but perhaps in a new location in the store.

Across Europe and the US, there have been lots of conversations about controversial statues and how we can handle them. From removing them entirely (or dumping them in the harbour, as the people of Bristol did with the statue of slave trader Edward Colston) to moving them to a different context, such as a museum, how we are to deal with monuments that are not in line with our current moral standpoint is still a question that remains unresolved. Part of that is down to the variety of statues that are problematic: it might be more suitable for some types of statues to remain in public spaces, but with plaques attached giving further explanation.

How do you feel about these types of statues, and how should we deal with them? Let us know your thoughts in the comments below.