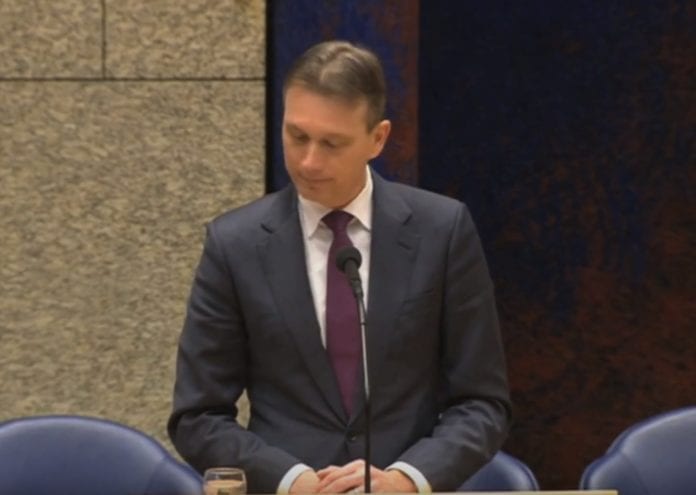 Minister Zijlstra of Foreign Affairs is stepping down. He announced this in a statement prior to the debate in parliament about his lie about a meeting with President Putin in 2006.

That debate now continues with Prime Minister Rutte as the opposition wants to know how long Rutte has been aware of the lie and why he has been silent about it for so long.

Here’s Minister Halbe Zijlstra tearing up at his farewell speech:

In his statement, Zijlstra described it as “the biggest mistake in my political life by far.” The Netherlands deserves a minister of foreign affairs who is beyond any doubt. “ Visibly emotionally he said that he sees no other option than to offer his resignation to the King. “I do that with regret in my heart, but with full conviction.”

Zijlstra said that he made the statement with a heavy heart. “I would have liked it differently, I was full of energy and plans.”

Minister Zijlstra had to resign because he wasn’t credible anymore

Yesterday Zijlstra offered apologies for his lie. Many opposition parties then concluded that the minister was no longer credible, which was also concluded here at DutchReview yesterday. The coalition parties initially defended Zijlstra, but today they did not want to say anything more about their support prior to the debate.

In the past, Zijlstra richly spoked for several times about his presence at a meeting in a Putin ‘Datcha’. The Russian President would have spoken about his desire to expand Russian territory with Ukraine, the Baltic States and possibly also Kazakhstan (‘would be nice to have’)

Yesterday, Zijlstra admitted that he was not present at that meeting at all. He had heard about former Shell CEO Jeroen van de Veer. In order to protect him as a source, Zijlstra, in his own words, just took the story for himself. Today Van der Veer announced that he was the source. He also said that Zijlstra had misinterpreted his words.

Besides all of this, we also got a nice meme from it all:

Big scandal in The Netherlands right now. On social media, the Dutch FM has become the laughing stock. Pictures like these circling around on twitter with the hashtag #HalbeWasThere. pic.twitter.com/EE6VODPMQ4