The PVV Election Manifesto for Rotterdam is (Unsurprisingly) Bigoted

Several days ago, the Partij voor de Vrijheid (The PVV, Party for Freedom) released their 2018-2022 official election platform for Rotterdam. It shouldn’t surprise you to find that it is exceptionally bigoted. As we couldn’t find an English-translation of the document, I’ve taken the liberty of translating the most notable elements: 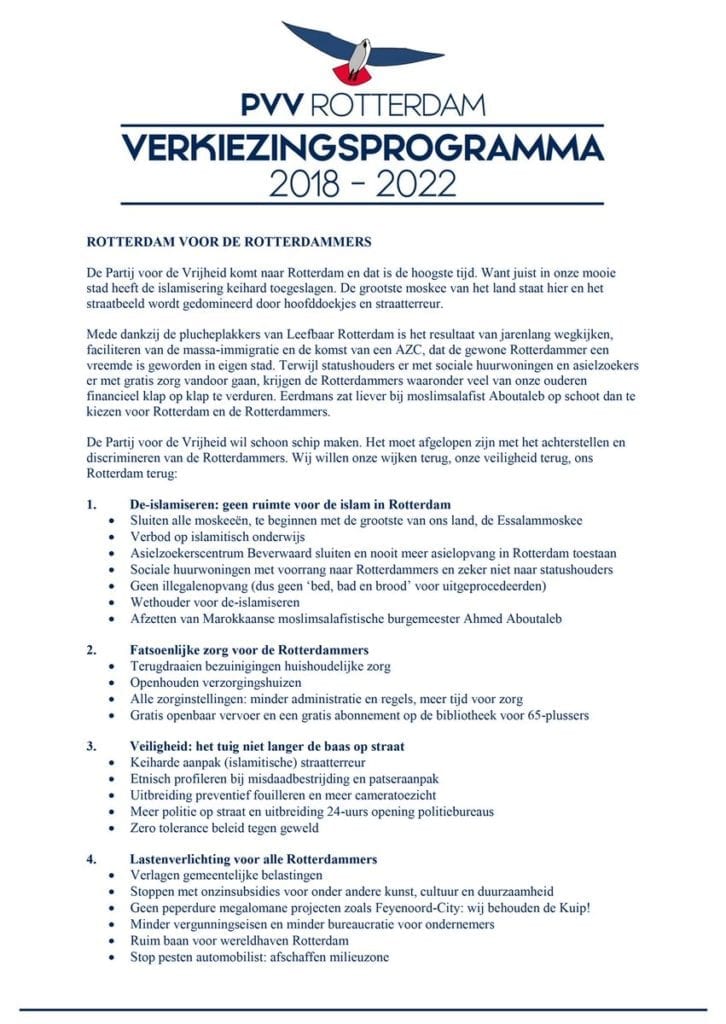 “The PVV is coming to the Rotterdam, and it is high time because our beautiful city has been hit hard by Islamization. The largest mosque in the country stands here and the streets are filled with headdresses and terrorization.

The PVV wants to clean up this city. Discrimination and bias against Rotterdammers need to end. We want out neighborhoods back, our safety back, our Rotterdam back:

For the sake of time and relevance to this article, I’ve only translated about half of the document, but it should be noted that the omitted sections also include a desire to remove environmental car zones as well as remove all subsidization of arts, culture, and sustainability projects.

If reading this angers you, it should. Of course, these policies are not surprising coming from Geert Wilders’ ridiculous political party, but that does not make such ideas any less dangerous. During the national elections in 2017, the PVV managed to grab 15,66% of the vote in Rotterdam, just a few votes away from being the largest party in the district. It may not have been enough to claim the power they wanted, but it certainly rings a few more alarm bells.

The PVV’s election manifesto and rhetorics in Rotterdam

The rhetoric used by the PVV speaks for itself. They use the term “Rotterdammers” frequently, and use it to refer to only those that they deem to be Rotterdammers (which, if you haven’t figured it out, essentially means white ‘pure’ Dutch persons). It’s ridiculous, because those that practice Islam, those living in Rotterdam, who have lived their whole lives in Rotterdam, are Rotterdammers too.

Geert Wilders and the PVV represent everything that is wrong with the Netherlands. Their ideas threaten to undermine the core fundamental ideas that make this country wonderful.

I’m not saying that the Dutch have it all figured out, not at all. There is a reason that such extremist ideas have managed to regain a foothold, and a reason that there seems to be such a political and ideological divide between so many people. But offering asylum to refugees, helping to aid those in need, and trying to create a country where people from a multitude of different backgrounds can come together and live, that is what makes the Netherlands great.

Here are 7 other things:


I should also mention that, despite his best efforts to cover it up, Wilders himself has an immigrant background. Truthfully, Wilders is of Indische descent, meaning he has Indonesian heritage. It’s probably also the reason that he dyes his hair blonde. It’s no wonder he tries to hide it, while he continually attacks policies that provide immigrants with the chance at a decent living, the same policies that no doubt allowed Wilders’ family to settle in Holland in the first place.

But we could spend all day picking out the fallacies, hypocritical ideas, and stupidity that lies at the foundation of the PVV’s platform. Instead, let’s focus on what’s important: combating the extremist bigotry that the PVV presents. If we don’t, then we put ourselves at risk of allowing a society to be created where it’s OK to be prosecuted on the basis of your belief or your skin color, and where those that most need aid will be those least likely to receive it.

We should be aiming to make the Netherlands a better place to live. Not the opposite.

Due to a lack of new employees, Schiphol airport may find itself forced to limit the number of travellers departing...