A day on board of the ss Rotterdam: a vintage voyage 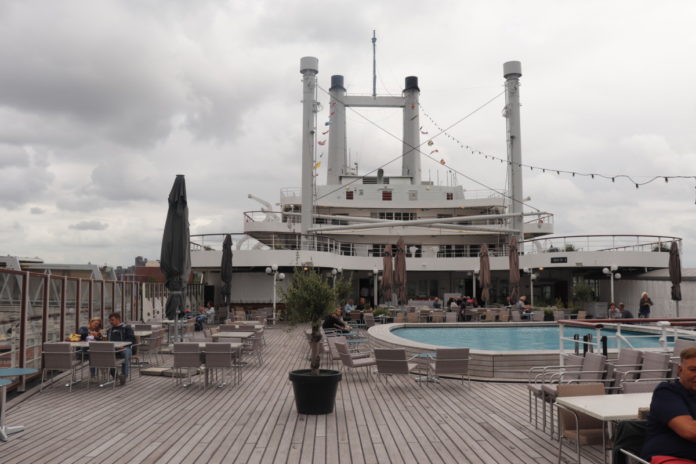 What if I told you that there was a time travel ship docked in Rotterdam that would take you back to the glamorous Sinatra-era days of the fifties and sixties (with WIFI of course). Well, you probably/hopefully wouldn’t believe me because such a thing doesn’t exist, but what does exist is a gorgeous steamer docked in the up-and coming neighbourhood of Katendrecht. Join me for a cruise on everything that the SS Rotterdam has to offer!

What is the ss Rotterdam and where is it?

The ss Rotterdam is a cruise ship from the golden days of the ‘Holland-America’ line. After a life of sea voyages and renovations, it is now in use as a swanky hotel, restaurant and meeting place. It’s permanently docked at Katendrecht in Rotterdam, which is an up-and coming neighbourhood and certainly worthy of a visit by itself if you’ve never been there.

If you don’t have the time for a proper dinner or staying a night on board the ship, you’ll be happy to know that it’s open for drinks at its rear deck as well – which has slowly but surely gained status as an Instagram hotspot.

The history of the ss Rotterdam

The ss Rotterdam was built in Rotterdam itself in 1959, and was the fifth ship by this name to sail for the famed Holland-America Line. If you’re thinking – “hey, I read about this before, DutchReview!” –  then it was probably in this article about the equally iconic Hotel New York.

Back in the sixties and seventies, the ship saw it all and then some. People dressed up every night to dine like royalty while the ship steamed up to New York. Once ashore in the Big Apple it would host the great entertainers of that era, with even the voice himself, Frank Sinatra, singing on the ss Rotterdam.

If you go on a tour through the ship the veteran tour guide has some truly rich stories about their past times when they worked aboard the ship.

It experienced the last decade of the transatlantic line and cruise ship service between Rotterdam and New York. Then the ship sailed a bit into a period of, well, less extravagant times, and its future didn’t look too much like smooth sailing water (sorry for all the seafaring puns, there will be more though). Lucky for us it has been completely renovated in the style envisioned by the builders, that style we now all love.

Staying a night on the ss Rotterdam

You’ll be happy to learn that booking a night on board the SS Rotterdam is actually pretty affordable. When I checked you could even get one under 100 euros per night. The reason for this fair pricing is, well it’s on a renovated ship, so yes there’s a lot of swag but be aware that the windows are a bit small and the rooms are snuggly – if you’re a sucker for high ceilings then this might not be for you… and perhaps staying there for weeks on end would also be a bit too much for the claustrophobic among us.

Nonetheless, the rooms come with endless amounts of atmosphere and were beautifully renovated, so perfect for staying for a weekend or midweek break.

Fine dining at the ss Rotterdam

There are actually a few spots on the ss Rotterdam to get your fix when it comes to food and beverages. There’s the Lido, which is the regular area for your breakfast and casual dinner. There’s the Ocean bar for your cocktail needs on the weekend, and there’s also the Captain’s lounge for all your other drinking desires.

And then there’s the Lido Terrace (aka the Deck) which comes with all that swag you could possibly want for your insta photo:

But for that real fancy feeling onboard a ship you’ll have to reserve a table at the Club Room. It was easily the fanciest dinner I ever enjoyed in Rotterdam and has all that splendour of a bygone era we all miss from series such as Mad Men.

There’s jazz playing, the staff knows their stuff and can recommend some excellent wines and the service is of a non-Dutch level (which is good).

But of course, you want to know about the food. Dining at the Club Room is not a fast experience, the chef and his staff take their time to get you some very refined dishes. There’s the option to go a la carte, but perhaps you should just go with the flow and order a 4 to 7 (!!) course menu.

Because I can promise you, every dish is a little trip for all the senses. They look pretty, are creative and taste like a special night out is supposed to taste. Also, just look at this dessert:

Pro-tip: have them pair your wines with your dishes, we tasted some excellent and original stuff that night, they know their wines.

The Swag of the ss Rotterdam

But in the end, the decisive reason why you should want to visit or stay overnight at the ss Rotterdam is that this ship has plenty of sauce. It’s not just that it’s a ship (but it surely makes it better) that’s docked in the quintessential port town of Rotterdam – talk about immersion. But the ship is just loaded with artsy details and gorgeous art-deco interior design decisions.

From the bars to the staircases, from the dining areas to the old captain’s bridge: it’s either super nautical or has loads of charm and character. Especially when going on a guided tour by one of the ship’s veterans or when you’re going for dinner at the Club Room you can almost taste the vintage years, the Sinatra era, the many journeys the ship made to New York. It’s the closest thing you can get to feeling as though you’re part of Mad Men in Rotterdam or the Netherlands for that matter. (P.S: If you know of more venues like this one, please comment because we love them here at DutchReview!)

Grab a bike and explore the neighbourhood

The ss Rotterdam is docked in Katendrecht – an area which has seen a huge transformation over the past few years. Katendrecht was once Rotterdam’s gritty and dirty neighbourhood – the home for sailors and the red light district. Now it’s the perfect spot to grab a bite to eat or have a beer overlooking the Maas river while still retaining loads of the charm from the old days.

All of this is best discovered by bike, which you can conveniently rent from the ship. Besides getting the quintessential Dutch experience of cycling you also get to see more in less time while still being chill.

Katendrecht is not far from the the ‘Kop van Zuid’ and the centre of Rotterdam, and sports all that great Rotterdam architecture that we love, minus the crazy inner-city rental prices and tourism that you get in Amsterdam. There’s also lots to do in and around Katendrecht, which means you’re close to foodie hotspots like the Fenix Food Factory and the Foodhallen and also some of Rotterdam’s highlights – such as Hotel New York and the Erasmus bridge.

Or even better, take the Watertaxi from the ss Rotterdam

Last tip is the best one! If you ever wanted to feel like James Bond, the SS Rotterdam has its own station for the Watertaxi. These yellow speedy boats take you to almost everywhere the water goes in Rotterdam and it’s such a cool way to go from A to B.

What makes coming and going from the SS Rotterdam with a watertaxi such a special experience is that, well, it’s a boat that arrives at another bigger boat! Splendid views and it’s your own little adventure – and frankly the quickest way in many cases for moving around town.

Have you been to the ss Rotterdam? Share your experiences in the comments! And also, we mean it, recommend us some of that other vintage era experiences of the mid-century!

Previous articleDozens of ABN AMRO ATMs closed as a result of ‘plofkraken’
Next articleStroopwafel Liquor: The Perfect Dutch Sinterklaas and Christmas Gift!