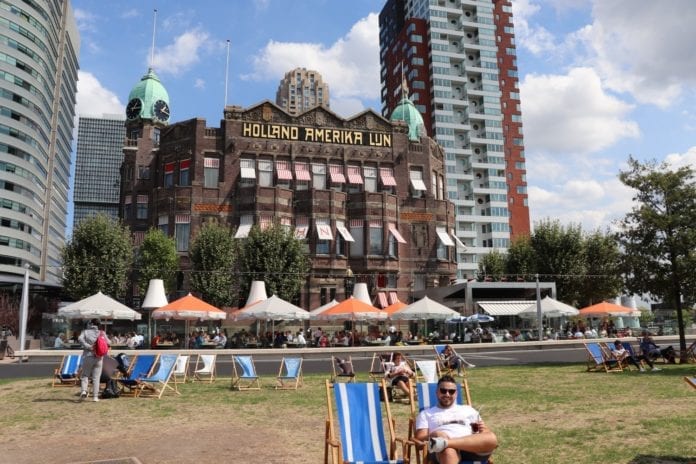 It’s literally one of the iconic postcard images of Rotterdam. Hotel New York is that lovely turn-of-the-century hotel with Rotterdam’s modern highrise buildings behind it and one of those rare old beautiful buildings in Rotterdam. Ever since I was a little Rotterdam boy I always wondered what was behind the beautiful facade, in case you are wondering too – take a walk with me through the rich history and beautiful stories (and rooms) of Hotel New York!

What’s this hotel New York in Rotterdam then?

Not familiar with the city or the mesmerizing building, well you should. Right on the far side of the ‘Kop van Zuid’  is where you can find the hotel. It’s far more than a hotel though, there’s a big and equally iconic restaurant there with another stylish and upmarket fine dining establishment opened up just underneath the hotel; the NY basement. Then there’s the terrace with a splendid view of the passing river traffic and numerous meeting and party rooms with a historical grandeur that you don’t see that much anymore in Rotterdam. 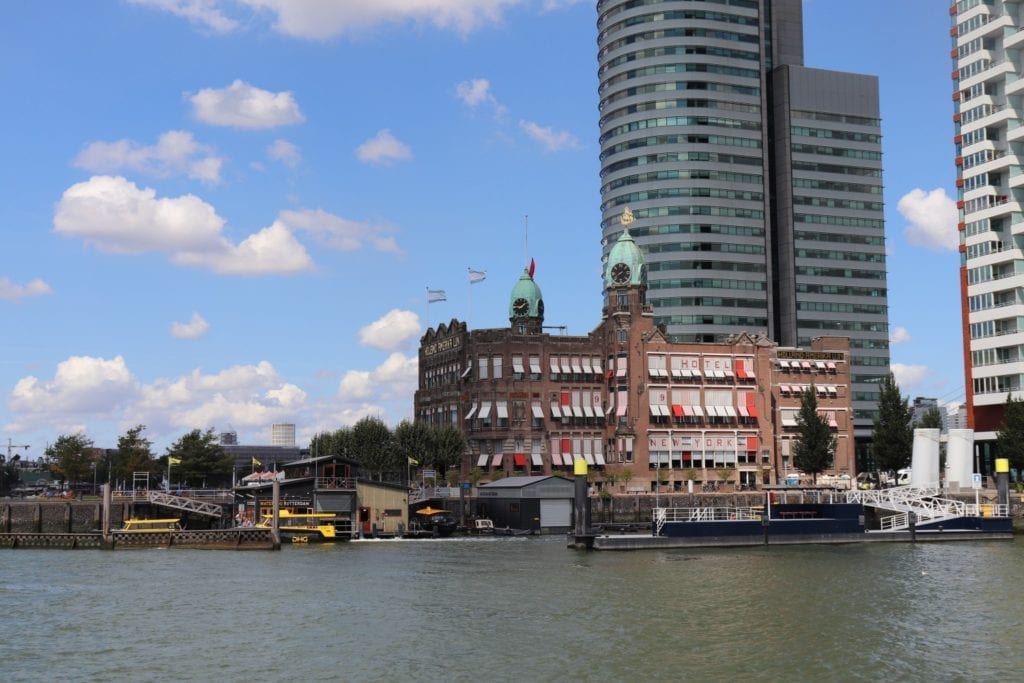 The history of Hotel New York in Rotterdam

But what really sets Hotel New York apart and ensures its place in the heart of every ‘ Rotterdammer’ is that through all the rocky times of Rotterdam the building was there and remained a recognizable landmark for more than a century.

It was originally an office building when it was built back in 1901, the location wasn’t just for its sweeping views of the Rotterdam waterways; it was the headquarters of the ‘Holland-Amerika lijn’, which operated the shipping connection between Rotterdam and New York. Just like in the old days, ships still depart and arrive next to the Hotel.

It’s a grand story; more than a million European immigrants went to Rotterdam to get on the one-way tour to the new world. You’ll see plenty of paintings and other memorabilia in the hotel to remind you of this central part in migration history the hotel played. The last ship to New York set sail in 1971, soon after the building stood vacant until the early 1990’s when it was reinvented as a hotel. After the completion of the Erasmusbridge in 1996 the area quickly became the hip and stylish ‘Kop van Zuid’ we know now, Hotel New York being it’s classy vintage signature.

Fun fact, the founders of Hotel New York also founded the ‘watertaxi’ in Rotterdam. You’ll see these little boats everywhere around the Hotel and it’s by far the most fun way of getting around Rotterdam.

How’s a stay at the Hotel New York?

Enough about the history, time to venture inside and sleep a night there! All the rooms are unique, which is always a welcome relief from hotels that have 300 rooms that are all the same. The rooms are spacious too and as far as I could see most of them sported a nautic, turn-of-the-century art deco theme – which it does extremely well. 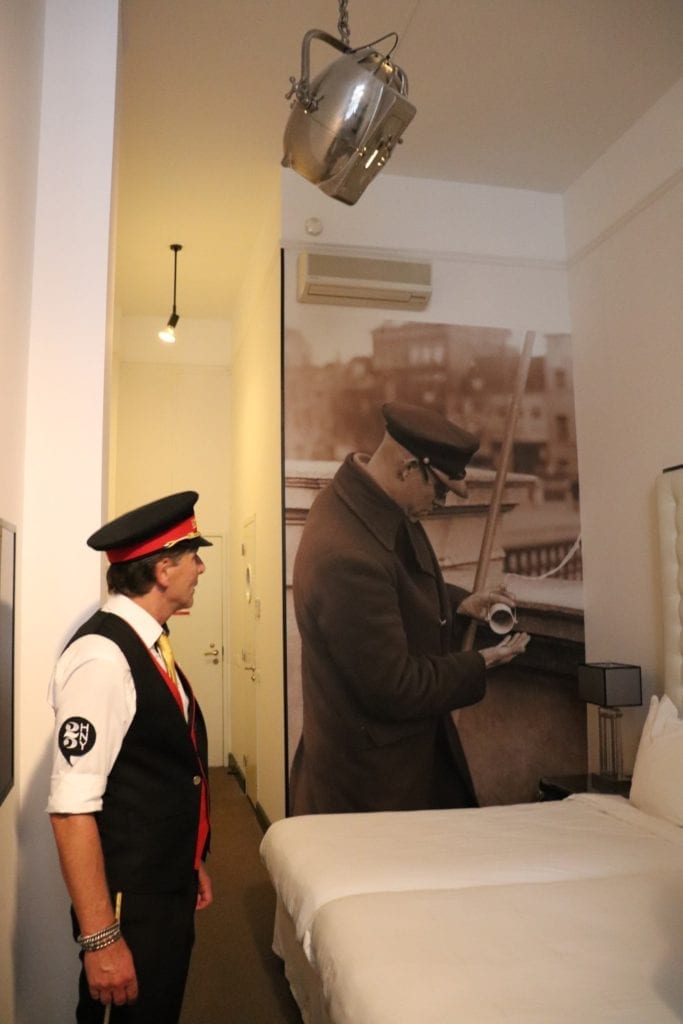 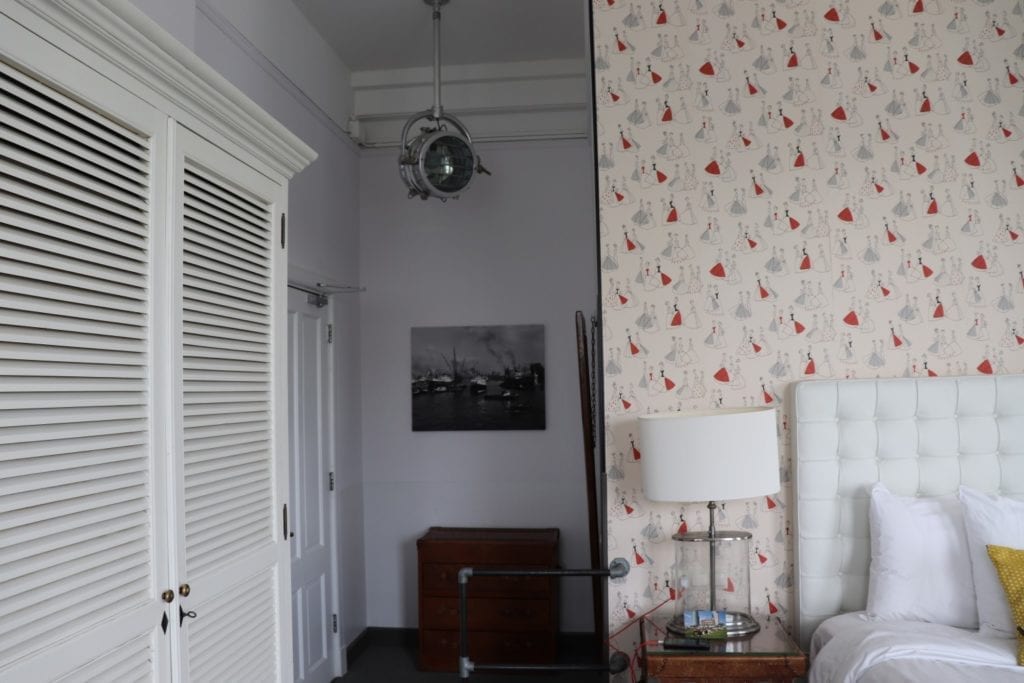 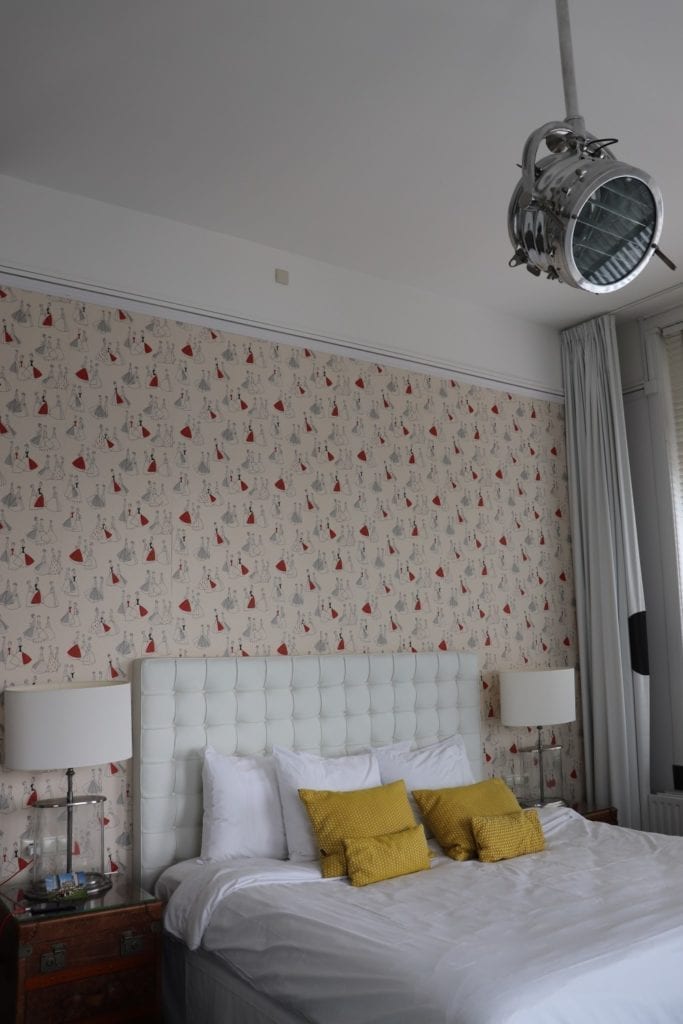 Don’t worry that the hotel is stuck in the past; Nespresso machines, flatscreens and luxurious beds are present. Furthermore, most rooms sport high ceilings and a balcony of some sort. If you’re lucky your balcony also has a luscious view and a binocular ours, which made the little Rotterdam boy in me totally happy.

The Hotel has a few doormen for your convenience, if possible they’ll tell you all about the hotel, the history and the original rooms. These friendly fellas really do add to the atmosphere, they took us to two rooms which are really worth saving up for. Check out the ‘torenkamertje’ and the ‘director’s room’ (which are still affordable for a night or 2)

Going up the stairs of the ‘tower room’, check out that view!

So besides a classic night of sleep, what else is there at Hotel New York?

The restaurant and terrace of Hotel New York are Rotterdam classics

Often when I take visitors to Rotterdam and see the sights, a visit to Hotel New York is part of the program. The restaurant of the Hotel is big, has a great decor and a tasty and affordable menu – the classic to enjoy over there are the oysters. But don’t worry, there’s an epic pie assortment as well and Dutch classics like bitterballen.

If the sun is shining then be sure to grab a drink on the renowned terrace of the hotel, it’s just perfect to sit there and watch the ships go by. The terrace boasts both regular seating and these nice deck-chairs, together with the grand building and its epic modern back-drop it makes for the perfect Instagram shot as you can see:

Woohoo! It’s one of those things thats on a lot of bucketlists of #Rotterdammers. Staying at the iconic @hotelnewyork – it was everything we hoped it would be. Awesome #vintage #design rooms, that #turnofthecentury vibe, the most #newyork like neighborhood of the Netherlands and epic stories from its iconic past. Oh and don’t worry, we slept like babies after filling up at the brand new #foodhallen right next to it. If you’re not able to catch a night at #hotelnewyork then make sure to grab a drink from their lovely terrace or swing by their restaurant! ??? Review is coming up!

And then there’s ‘NY Basement’, a stylish restaurant slash cocktailbar all done in the style of New York in the roaring twenties. We’ll talk about that one later, it kind of is deserving of its own article, but here’s a little sneak peek: 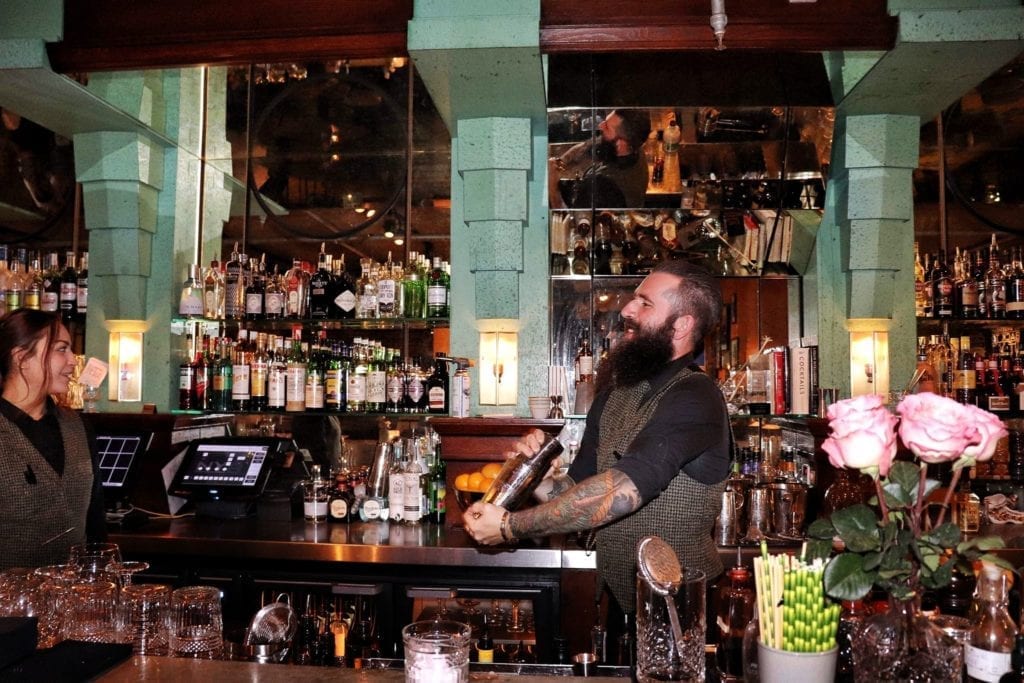 What else is there to do around Hotel New York?

Don’t worry that it’s not right in the city center of Rotterdam, this area – de Kop van Zuid- has plenty going on and many rate it as the best part of Rotterdam. First of all, the whole area is a showcase of modern architecture and urban redevelopment. There are new architectural icons such as the high-rising New Orleans and the gigantic ‘De Rotterdam’. 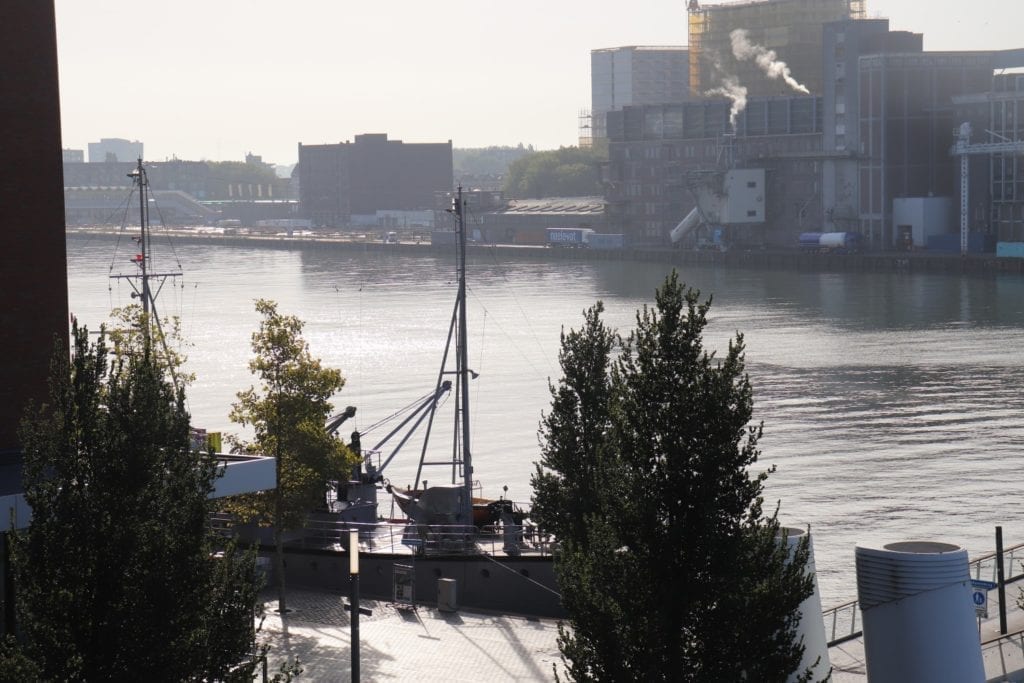 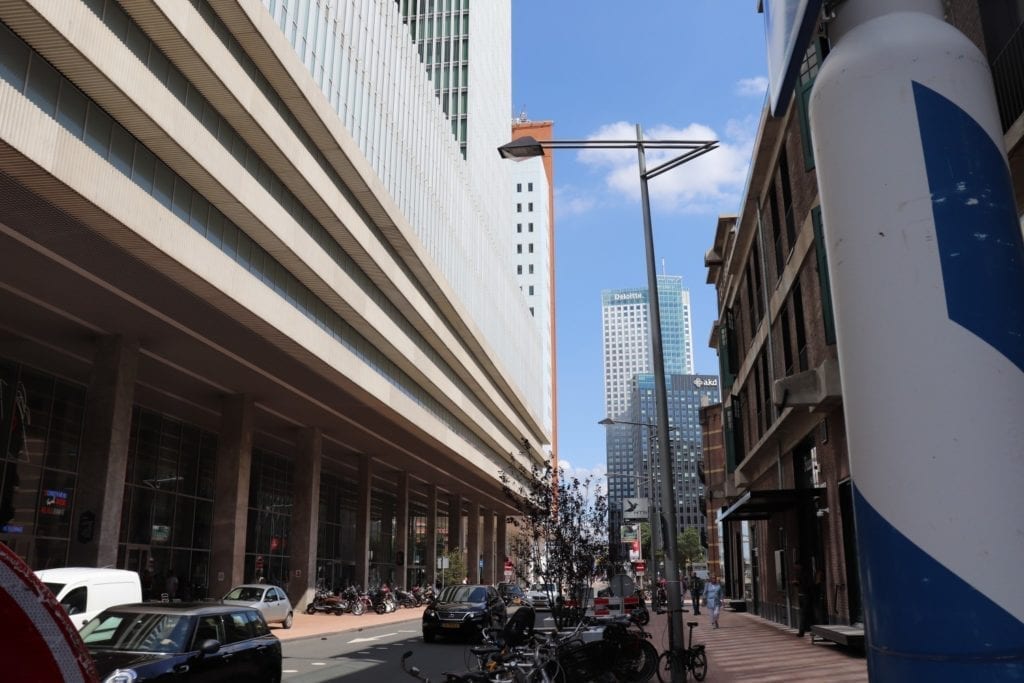 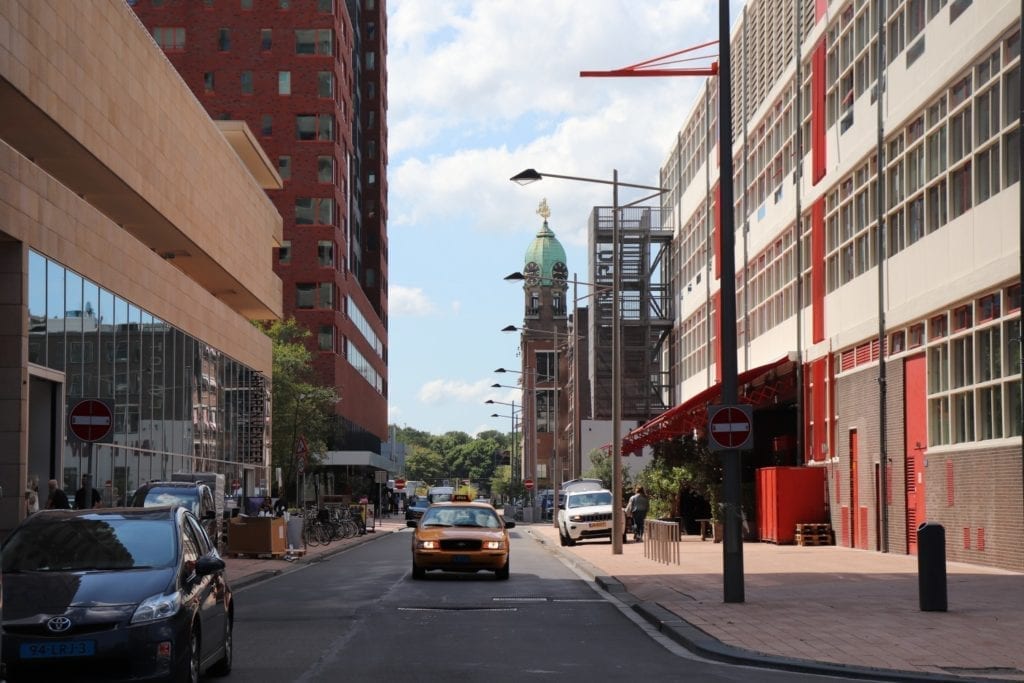 And then there are shining examples of urban redevelopment done right with the newly opened Foodhallen and the Cruise terminal. Plenty of more good stuff coming to the area as well in the future:

Looking for stuff to do? Well, those new foodhallen are surely worthy of a visit and so is the beloved Fenix Foodfactory – both just a stone throw away.

You can go for an awesome gaming experience in the pinball-museum or get a classic men’s haircut in the stylish NY barbershop which is located in the same building as the Hotel.

Just like so many other things in the area, all of these wouldn’t be around without the beating heart of this city that is Hotel New York – a must see in Rotterdam.

Previous articleGuide to Leuven: a weekend trip to Belgium!
Next articleGetting a new bike from the internet in the Netherlands: what’s that like?