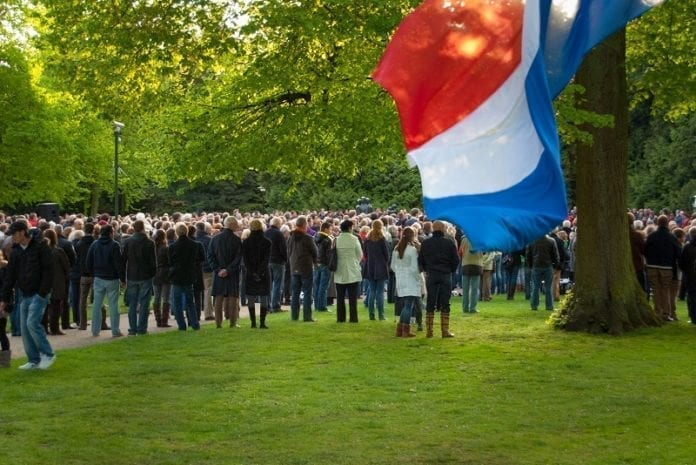 Planned protest on 4th May

Geen 4 mei voor mij, an ‘anti-racism activist group’, has created a Facebook event, with plans to hold a noise protest during the WWII commemoration on Dam Square (Amsterdam) on 4th May. They have been campaigning (and complaining) in different ways for years about the commemoration of the dead. This means that during the 2-minute silence, they will ‘break the silence’ on Dam square. One reason for holding this demonstration (as described on their Facebook event), is because they feel that only white’s are commemorated. It does not take into consideration the ‘4 million killed in the Dutch West Indies’, yet 22,000 of the fallen in WWII are remembered.

In the event, Geen 4 mei voor mij quotes what National Remembrance Day is described as. It says that: “During the National Commemoration we commemorate the Dutch war victims. All – civilians and soldiers – who were killed or murdered in the Kingdom of the Netherlands or anywhere in the world since the outbreak of the Second World War, and then in war situations and in peace operations.” However, Geen 4 mei voor mij argues that this isn’t the case at all and therefore it is racist.

The confusion around National Remembrance Day

This isn’t the first time National Remembrance Day has come under fire for ‘who should we remember?’ Over the years numerous debates and discussions has meant that nobody knows exactly WHO to remember any more. Do we remember everyone? Or do we keep it as it is? Do we update it, and include more recent events? Do we have different commemorations? Even us at DutchReview have discussed this in the past. In the end, there is always someone not happy with it and it causes a lot of friction (you only have to look on the event comments on Facebook to see that).

There is a time and a place for these demonstrations and understandably this really isn’t the time. In this case, a VVD Amsterdam city councilor (Marianne Poot) wants the mayor to ban the demonstration. This likely not going to happen yet, as the demonstration hasn’t been registered yet and they are still waiting to see what to do with the whole situation. An alternative was to move it from Dam square. So whether it goes ahead or not (or where), is yet to be known.

What do you think about this? Let us know in the comments! And don’t forget to join our Facebook group, for more Dutch discussion :)

Previous article7 Dutch Startups that make the World a Better Place
Next articleWhat’s the weather going to be like on King’s Day?

17 best coffeeshops in Amsterdam: the best spots to smoke in 2021

What are the best coffeeshops in Amsterdam? Whether you're into your Indicas or Sativas, bricks of hash, weaker strains like...

In a racial profiling claim filed against the Royal Netherlands Marechaussee — a judge in The Hague overruled the case as there’s no conflict...

Did the Netherlands break the Climate Accords? Environmentalists angered by budget decisions

Between the Dutch government's shifting focus to underground CO2 storage and raising the limit on CO2 that may be stored with government money —...

Sometimes, the Dutch can be innovative and forward-thinking. Dutch brains gave birth to the Delta Works, the microscope, Wi-Fi, orange carrots, and of course,...
Current Month