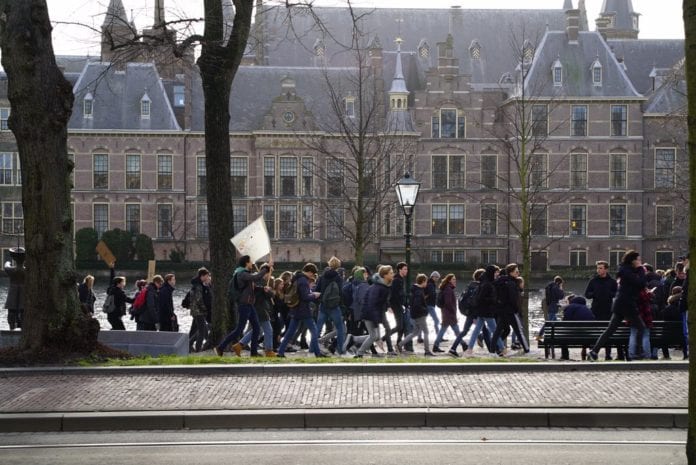 A huge turnout is expected for today’s student protest in The Hague. The trains from Amsterdam Centraal today, practically any train heading to The Hague was flooded with students.

Between 10,000 and 20,000 secondary school students will protest outside The Hague’s platform for free speech, Malieveld.

The masses of like-minded students is overwhelming the inter-city public transport. The NS deployed staff members to the appropriate platforms to guide huge crowds of young people. “We see crowds on their way to The Hague from Utrecht, Leiden as well as Rotterdam”, according to a spokesman.

What are students protesting for/against in the Netherlands?

The protest is against those in power reluctant to make big leaps towards preventing climate change. Climate change has an irreversible and devastating effect on our ecosystems. The youth have taken it upon themselves to skip this school day and protest, driven by a sense of civic and moral duty.

15, 16-year-old kids were shouting on the train “why the f**k should I study when the world is ending?”, banners read “raise your voice, not the sea level!”. The students protest for a number of reasons and all of them noble.

Support for student climate change protestors in the Netherlands

350 Dutch scientists penned their names in an open letter published on Trouw, showing solidarity with the young activists. They urge that “political courage and far-reaching measures are needed quickly for the climate”. To make this day possible for the youth of the Netherlands many many parents had to sign consent forms allowing them to skip their scheduled classes.

#TBT to @wef: Hear @GretaThunberg's call to #ClimateAction. She is proof that we need to listen to the young generation for a sustainable future.pic.twitter.com/J0Sc7uG6Iv

Should student protestors be punished for skipping school?

Some schools will be issuing consequences depending on the student’s previous absences. The minister for Education, Arie Slob said last week he welcomes the children’s involvement but claims they would be better off demonstrating at the weekend. “Education is education and we are not going to give way to truancy”, he told current affairs to show Nieuwsuur on Thursday evening. Reporting to truancy officers is only compulsory if a child is absent for more than 16 hours over a four week period, the council said.

Proud dad today. My daughter in the Dutch Climate Rally #klimaatspijbelaars @THNKschool Our kids need to raise their voice. Ever since my generation read the first Club of Rome insights we knew this time would come. Little @THNKers in the making! pic.twitter.com/9B0nRif9Pp

I, for one, believe children are our future. The young are protesting for a better world since they are the ones to inherit the Earth it ought to be a clean one.

Check out some of the powerful footage and photography from today’s march!

To show your support for the cause, the hashtags #KlimaatSpijbelen, “Climate Truancy” and “#YouthForClimate” is being used on Twitter and Instagram. Good job kids!