Brightly coloured bikes decorated in flowers, butterflies and clocks have been popping up all over Amsterdam for years. Have you seen any of these beautiful fietsen?

The bikes are not the work of a mythical Dutch bike fairy, but an American man by the name of Warren Gregory (50).

Known fondly as the Flower Bike Man, Warren’s bike-decorating began when his wife couldn’t find her bike at Amsterdam Centraal. Warren’s wife, Michelle, has had epilepsy for years and often struggles to remember details like where she parked her bike — although let’s face it, finding your bike in Dutch bike sheds can be a nightmare for anybody!

To help her out, Warren decorated Michelle’s bike in bright flowers so that it would be unmissable. He then decorated a bunch of abandoned bikes, which he left along the route home so that she would never get lost again. How sweet is that?

Seeing the joy that his bikes were bringing to passersby, Warren started decorating more bikes and scattering them throughout the city of Amsterdam. He makes them in his Amsterdam houseboat, and then ventures out into the streets early in the morning to leave his gifts to the world before the city wakes up. Each bike is carefully named and has its own personality, but all represent love and happiness.

“I say smiles are contagious. They also are addictive,” Warren says.

Warren creates the bikes using money out of his own pocket, and utilises old, abandoned bikes that he collects. Bringing these forgotten wrecks back to life is beautiful in so many ways — but unfortunately, many of Warren’s pieces have been stolen or vandalized.

Some of his neighbours constantly pull off the flowers and throw them into the canals. A few of his bikes have even been set on fire, causing his wife to fear that their houseboat is next.

He’s not sure why people would want to damage his bikes, but in response to some of the vandalism, he said on Instagram, “if you destroy my things I come back harder, I already added new flowers.” Yeah Warren — flower ‘em up!

In a country that loves bikes so much, it’s no wonder that Warren has become somewhat of a treasure in Amsterdam. People love Warren’s bicycles, and many insist on paying for his creations. He customizes bikes for individuals and has even worked with a perfume company in Amsterdam. So, if you’re thinking of getting a new bike, why not have it be-dazzled by the Flower Bike Man!

But money was never Warren’s main motivation. “For me, seeing the bike I created is enough.” Although he has come to be seen as an artist, known of course as the Flower Bike Man, Warren always refers back to the reason he started decorating bikes in the first place — his wife.

I have to say, other than being a creative artist, Warren is also a really nice guy. His Instagram posts are flooded with encouragements and words of love, and you can feel the time and love that he pours into every bike that he creates. We truly need more people like the Flower Bike Man.

What do you think of these beautiful bikes? Let us know in the comments below! 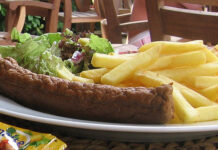