You may very well know by now how the Dutch like to spend their Christmas and Sinterklaas holidays — especially with all this press about Zwarte Piet going around — but how do they celebrate Thanksgiving in the Netherlands? You might be thinking, “Um…they don’t?” but wait just one turkey-day minute, dear reader! Haven’t you ever heard about Leiden’s Thanksgiving history? *adjusts glasses* Well, then, let me teach you.

For those who don’t know much about Thanksgiving, here’s the basic story: in the 17th century, a bunch of Pilgrim colonists sailed their ship (the Mayflower, to be precise) to North America, fleeing religious persecution in England. There, they celebrated their first corn harvest by sharing a feast with the friendly Native American tribe who taught them how to farm the land. The end.

Well, not really. Thanksgiving is one of the most popular American celebrations known around the world. It is usually associated with being thankful and charitable. Not to mention all the parades and events. But to foreigners, what most stands out is the image of the typical American family seated around a dinner table filled with delicious dishes and a giant cooked turkey. Since we do not really celebrate this holiday in the Netherlands, you could say that we imagine Thanksgiving in America being a little something like this:

At the end of the article, there will be a nice summary of what’s going on in the Netherlands during Thanksgiving. But first, let’s take a closer look at the key part the lovely town of Leiden played in the origins of Thanksgiving.

So what role did Leiden play with regards to Thanksgiving?

“Hold up!” I hear some of you Dutchies cry. “You left out the part where the pilgrims came to Leiden for over 10 years.” (If you’re not Dutch but you already knew this, then good on you.) Most of us have never heard the full story of Thanksgiving. History teachers tend to leave out the fact that before the pilgrims arrived in Massachusetts, they first stopped in Leiden, and stayed there for a long time (though who could blame them? That’s what most of us foreigners living in Leiden have done!).

One of the main reasons they fled to the Netherlands was because the Dutch were more accepting of their religious practices. The Dutch Republic (Republiek der Zeven Verenigde Nederlanden) certainly seemed more appealing than the disparaging eyes and unwavering religious beliefs of the English.

Why did the pilgrims leave Leiden?

The pilgrims actually went to Amsterdam first, where it all was going smoothly for a while. After spreading out to live in Leiden and building new lives, the Pilgrims realised they were changing too much. Worse: they were losing their religion (cue the lamenting tones of R.E.M). They were grateful for everything given to them here but were struggling to adapt to the Dutch culture, which was now too liberal for their liking. William Bradford, Plymouth’s faithful Pilgrim and Colony governor, said they were being “…drawn away by evil examples into extravagance and dangerous courses.”

Jeez. He really didn’t agree with the ‘immoral’ Dutch ways. So, fearing this would be the end of their congregation if they didn’t move on, the Pilgrims decided to head to America.

A celebration of life and unity

In 1620, the pilgrim’s emigration from Leiden — where they had worked for about 12 to 20 years — truly began. They left Leiden via the canals, transferred onto a leaky ‘Speedwell’ (a ship built in 1577) in Delfshaven, then finally boarded the famous Mayflower in Southampton. Ultimately, the actual time span between the pilgrims leaving England and finally completing their famous voyage and great feast is pretty long.

Today’s ‘day of thanks’

It was during the Civil War, between 1861 and 1865, that President Abraham Lincoln declared Thanksgiving a national holiday. Nowadays, Thanksgiving is a time for reflecting on the people and things in our lives we are most grateful for.

What better reason to come to Leiden than to celebrate Thanksgiving, spending a day exploring the pretty canals and cobbled streets? From its tiny alleyways to its wide-open roads, Leiden is a city that can sometimes feel much smaller than it is (in the best way).

Every year in Leiden there is a Thanksgiving Day Service held at the Pieterskerk, a beautiful church. One of the pilgrim leaders, John Robinson, is actually buried here, which makes it all the more interesting to visit. Or slightly creepy. Or both.

If you’re interested in the pilgrims and their Leiden history, well, you’re not alone. Attention for this interesting story is heating up and this year the city of Leiden, together with the UK, US, and the Wampanoag tribe, are celebrating and remembering 400 years since the pilgrims made their voyage.

In case you want to learn more about this, I highly recommend you go to the Mayflower 400 website (or their Facebook-page or Linkedin, if that’s your cup of tea).

Pilgrim and Thanksgiving spots to check out in Leiden

The city is home to the Leiden American Pilgrim Museum, a cute little medieval house dedicated to the Pilgrims (located on Beschuitsteeg, near the bell tower of the Hooglandse Kerk church). It’s an old building full of furniture, books, maps, engravings and other materials from the Pilgrim times. It’s meant to recreate how these people lived in England, Leiden and New England.

You’ll also find a memorial on the ruins of Leiden’s Vrouwekerk (AKA “lady’s church”), which the museum helped install. The bronze engraving commemorates the history of the church and its connections with the Pilgrims.

Here’s a little factual nugget for ya: Thanksgiving is also upheld in Orthodox Protestant churches on the first Wednesday of November.

On the third Thursday of every November, you can find traditional Thanksgiving meals (turkey, mashed potatoes, vegetables and gravy) at restaurants across the country. Some people also eat the typically Dutch Stamppot on this day (a slightly similar dish made with a combo of mashed potatoes and veggies).

A young Rembrandt and the pilgrims in Leiden

The plot thickens! Do you know who was a contemporary of the pilgrims in Leiden? A young painter called Rembrandt van Rijn. Actually, it makes sense that the aspiring master painter (then 16 years old) and the pilgrims ran into each other numerous times. The Latin school where Rembrandt went for his first studies is right at Pieterskerk Square — an area you don’t want to miss out on during your visit.

Want to see more of Leiden?

If this article has inspired you to want to see more of Leiden, then we have the place for you to go! Leiden’s tourism office, Stad van Ontdekkingen, can help you find out about everything from museums to shopping in Leiden.

There you have it! Now you know a little more about this not-so-American holiday. Care to join us in Leiden for the celebrations? 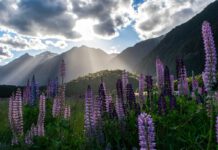