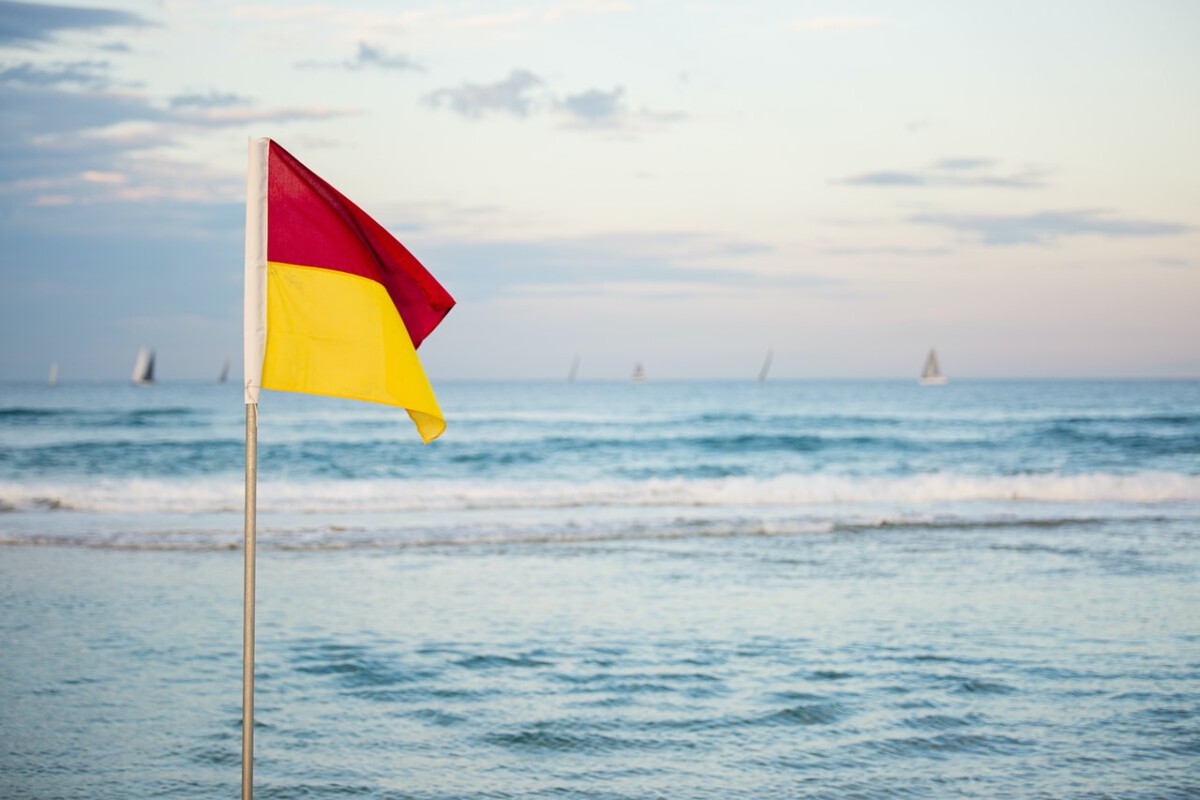 With Dutch summers heating up, it looks like we are all going to be running for the beach, canals, or lakes at some point. However, before we douse ourselves with sunscreen and break out the inflatable flamingos, it’s important to consider the hazards that come with swimming in the Netherlands.

While the Netherlands may not seem like a wild and dangerous location, many have been caught in dangerous waters in recent years. From thousands of rescues to the deaths of teenagers, fathers, and even experienced lifeguards, the North Sea has proven unexpectedly dangerous again and again.

Of course, there’s nothing to stop you cooling off and jumping in — but take note of the hazards below, follow the directions of officials, and know what all those weird flags mean. We’ve rounded up the hazards you need to know about when swimming in the Netherlands.

Hazards at the beach in Holland

If you decide that a Dutch beach is the place to be on a hot day, it’s often difficult to keep those pesky hazards in mind when you’ve got your toes in the sand and the sun on your back. Not only do you have to be mindful of murky waters and boats, but there are further hidden dangers.

Riptides in the Netherlands

Danger is probably the last thing you think of when you look at the word foam. However, in spite of its bubbly nature, foam has proven to be fatal in the Netherlands. In May, five surfers tragically lost their lives in Scheveningen.

Many were shocked that five experienced surfers (some of whom were also internationally trained lifeguards) could drown in the same area on the same day. It’s believed that a thick layer of sea foam in Holland at the time presented a hazard for them while swimming.

How to swim safely on Dutch beaches

Whilst the dangers are real, this doesn’t mean that you shouldn’t enjoy a bit of water during this heatwave. Here are some tips for safe swimming.

In life, we are always on the lookout for red flags, and this is a philosophy that should also be carried to the beach. Lifeguards in the Netherlands will usually alert beachgoers to the swimming hazards and conditions through the use of colour-coded flags, so keep your eyes peeled!

A red flag is quite self-explanatory, it means that you should not enter the water unless you want to face the embarrassment of having the coast guard escort you back out. It’s entirely prohibited to swim when red flags are raised.

Yellow flags indicate that you are allowed to swim but the conditions have been deemed dangerous due to strong winds or currents.

An orange windsock (not an actual sock) indicates that any inflatable unicorns, crocodiles, flamingos or just plain old air mattresses must stay onshore. This is due to the fact that wind levels are considered to be too high and thus, anyone who takes a little nap on their inflatable, beverage in hand, is in danger of drifting out to sea.

Finally, half-red, half-yellow flags mark out the areas within which a rescue brigade will be on watch. You can consider it safe to swim here — but stay between the flags, and stay in sight of the lifeguards.

Where else can I swim in the Netherlands?

Perhaps you want to be savvy and avoid the inevitable traffic jams (both vehicular and human) that are found along the Dutch coastline in hot weather. Perhaps you and your friends have decided it will be easier to simply hop into a nearby canal or lake? That, you can do — but a few warnings first.

TIP: Use the website or app Zwemwater to find nearby alternative swimming spots.

Hazards when swimming in canals in Holland

God only knows what’s hidden in those murky waters. Perhaps there are only a few feet between you and the river/canal bed! Furthermore, any seasoned resident of the Netherlands knows that the bottom of the canal often serves a dual purpose: it is both a waterway and a graveyard for poor unfortunate bikes. The last thing you want is to resurface with a rusty wheel spoke through your hand (it happens).

Be wary of the canal water quality

Historically, canals were a dumping ground for rubbish and sewerage — yuck! Generally, it’s not recommended to swim in Amsterdam’s canals — but the rules vary by city and time of year. Swimming in canals can have risks — E. coli and enterococcus can be present. Always check the water quality where you’re going on the Zwemwater website or app.

In many cities it is not necessarily illegal to swim in canals and rivers, but it is strongly discouraged by both the police and the Rijkswaterstaat for safety reasons. For example, swimming is not permitted in many of Amsterdam’s canals due to their classification as boating ways (vaarwegen). Certain boats and particularly barges will struggle to see a person swimming in the water if they are too close. While you won’t end up in a prison cell if you decide to take a dip in the nearest canal, but it is worth noting the unseen hazards when swimming in canals in the Netherlands.

The Netherlands has some great lakes around that are perfect for cooling off — but always double-check water quality first. Blue-green algae is a problem in the Netherlands, and can make you seriously sick! Lakes are also not often populated by life-guards, so make sure you’re with a friend if you take a dip.

Whether it be in the canals or in the ocean, the dangers of swimming are ever present. However, that doesn’t mean that we should let ourselves to bake inside our airconditioning-less houses. Enjoy the Dutch summer while it lasts, just be mindful of your safety while doing so!

Will you be heading for the coastline or canals? Let us know in the comments below!