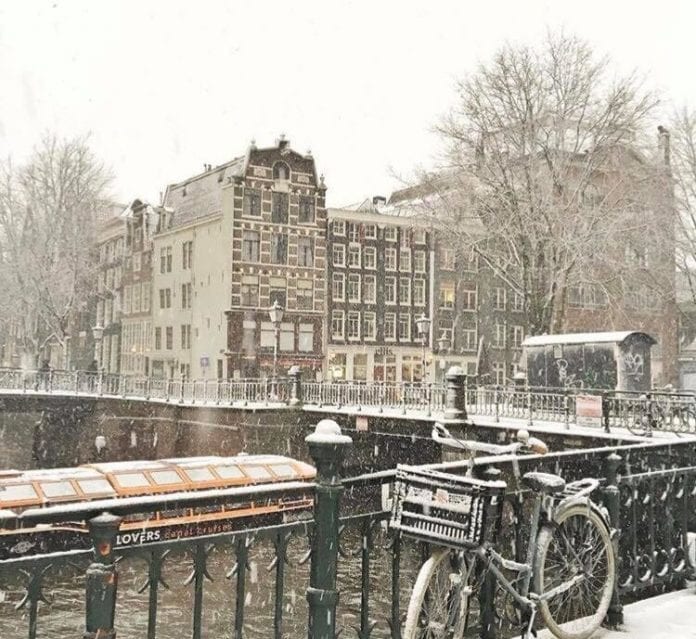 So there’s a Code Red and a lot of snow. What’s going on exactly? Are there still trains running? Can you take the car? All about the Snow Storm in Holland.

We told you it was going to be rough! But it’s even rougher than we had anticipated – in fact, it’s worse than anybody anticipated! The country is grinding to a halt and there’s nothing we can do about it, or little anyway, other than trying to enjoy the picturesque scenery and definitely not doing something stupid that’s going to get you injured…

The KNMI is the National Meteorological Institute, a government agency, that is known for its excellent weather tracking – though they occasionally cry wolf just to be sure no one is surprised or overtaken by bad weather, KNMI released today its “Code Red” alert for heavy snowfall and extremely slippery roads.

Code Red will stay into effect at least till midnight, and counts for 8 out of 12 Dutch provinces – only Groningen, Friesland, Drenthe and Limburg will bear “Code Orange”; which is still very serious.

Rijkswaterstaat, the executive agency of the Ministry of Transportation and Infrastructure, has also given out alerts – take it from the Dutch, always take Rijkswaterstaat’s statements very seriously. The agency is comparable to the “Office of Emergency Management” in the US, for example, and will never make rash decisions. When urged by Rijkswaterstaat to (not) do something, be sure to take that advice unless dealing with some sort of real and urgent emergency.

Rijkswaterstaat has strongly urged people not to go on the roads, period, and to work from home as much as possible. It calls circumstances on the roads “Extremely dangerous” – we’re not questioning that!

The NS, the Netherlands Railways, has urged people to leave for home early – so that passengers can be spread over the trains and delays will be met with some reserve. Currently the usual schedule is down, normally an Intercity train will arrive every fifteen minutes, which is now expected once every half hour at best.

Between Utrecht and The Hague (Den Haag) there will be no Intercity’s the entire day due to mechanical errors with railroad switches – likely due to the cold weather. There will also be no trains to and from Zaandam, Amsterdam’s neighboring city, due to multiple issues.

Is your plane still departing?

Schiphol Amsterdam Airport, being one of the largest in Europe, is still ‘operational’ but things are not going great. Passengers and travelers are strongly urged to look at all information available about going to the airport as well as their respective flights. Many airlines are canceling their flights because of the weather. As it stands 430(!) flights have been scrapped. One of those airlines is KLM, Holland’s national carrier, who has canceled and is re-scheduling 300 flights, it is trying its best to inform all passengers ASAP.

Due to extreme weather conditions, our operation is severely disrupted. The response time of our service centers is longer than normal. Please check our flight disruption page https://t.co/t2rzlrR1IJ for the latest updates. pic.twitter.com/FziXqFpKhk

Schiphol also has an app available to check all flight info ‘Live’ – which is very useful in situations like this!

No buses in Brabant

Last but not least – Arriva, a well-known (regional) bus company in the Netherlands, has returned all buses to their hangars in the East of Noord-Brabant. There will be no service in Boxmeer, Cuyk, Uden, Veghel and even the sizeable city of Den-Bosh will be without Arriva buses today. Arriva finds it irresponsible to operate under the current conditions, which unfortunately will leave passengers stranded but we hope that some sort of alternatives will be found soon. Still, it’s probably better to be stranded at a warm station than in a warm hospital bed after a bus accident.

So, for now – sit tight, or dress warm if you must go outside, take some photos and share them in our Facebook comments and be sure to sip some hot cocoa! We wish you all a very Merry Pre-Christmas white-out here at DutchReview!