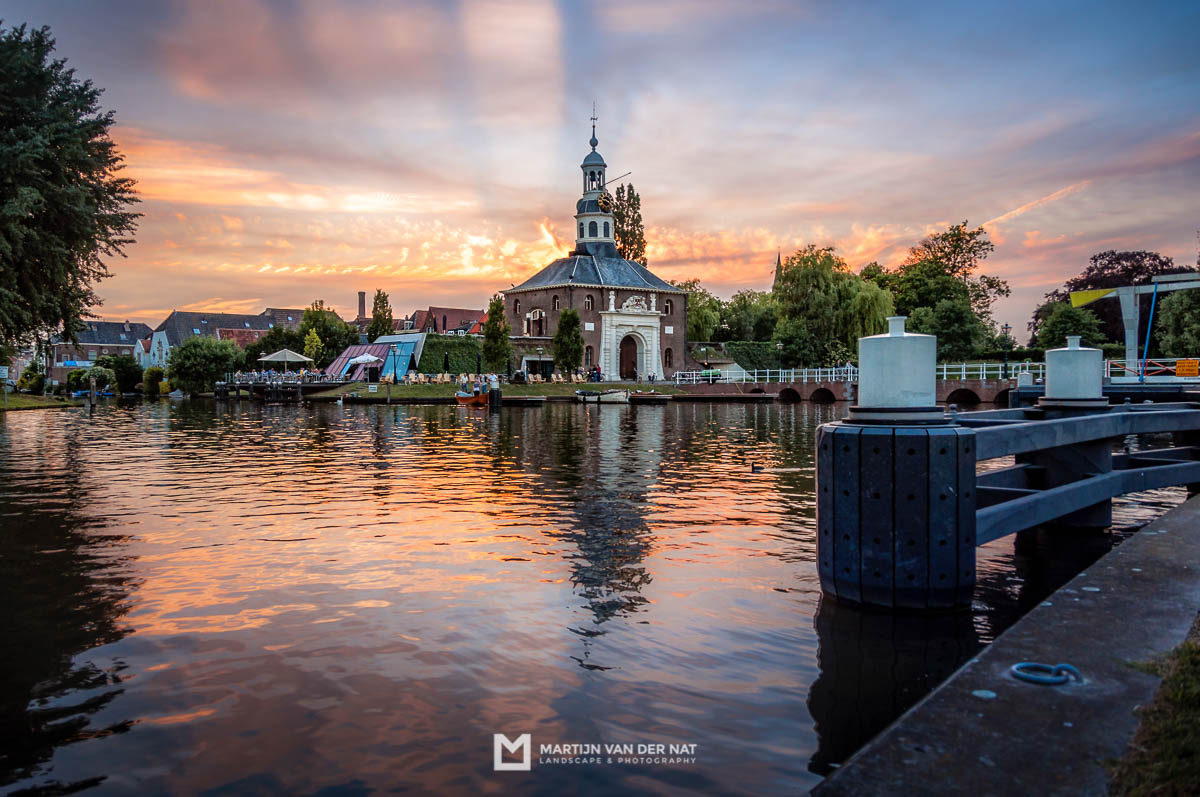 What if we told you that there’s a park opening up in the Netherlands that’s kind of like the ‘High Line’ (that elevated railroadtracks-turned-park in New York). Well, first of all you wouldn’t think of Leiden; this classical town doesn’t have that many high-rise buildings. And second, you would definitely think, why hasn’t anybody told me about this magnificent piece of urban nature being created?

Well, we’re going to tell you all about that, as the Singelpark in Leiden is nearly completed and it’s looking very promising and gorgeous already.

The Singelpark is simply said, a park made up of the ‘ring’  of canals around the old city center of Leiden.

The inner city of Leiden is, with all its magnificent old buildings, not the greenest city centre of the Netherlands and as such the need for more lush local green scenery is increasing. Instead of a random little park or a lawn we can now welcome the Singelpark.

The Singelpark in Leiden includes the ring of outer canals, all adjacent parks and intermediate buildings. The existing parks do not disappear (don’t worry hortus botanicus fans!) but become part of the Singelpark, each little park will retain its own character and theme.

The road around the canals is also part of the Singelpark; which allows you to completely walk through the whole park like the famous high-line. It’s going to be over 6km long! The Singelpark is the way to connect the ring of parks into a coherent and complete ‘park-experience’ and make it an icon of the city in the long run. Leiden is surely making a big deal out of it, since there are six (!) bridges planned for the park, the last of them being scheduled to be placed in September 2019 (don’t worry, most of these new bridges are in the East of Leiden, it’s already possible to walk – unhindered – through the park).

A walk around the Singelpark: 7 highlights

Since the Singelpark is, in its essence, a tour-around-the town route, you can start a walk through the park basically anywhere. Let’s start at the park spot which is the closest to the station.

Molen de Valk is there since the start of the 17th century, so it’s certainly one of Leiden’s pride and joys. I ‘have’ to cycle past it every time I go to the DR office and it dominates the area. The mill was originally used for grain and now it’s a little museum.

Chances are that you already saw it tons of times on insta or on in our photo-reports, what can we say, it’s a photogenic windmill and town, rightly so. Chill in the grass near the windmill or check out the awesome, and just renovated, Lakenhal if you’re here in Leiden for a day. If you want to continue with walking through the Singelpark, then just head in the direction of the large chimney – where you’ll find the next part of the Singelpark.

It isn’t all canal houses and windmills in Leiden. In 1902 the big energy central was built, it has heart, still works and its chimney is with 80 meters the tallest thing in Leiden. For years I looked at this one from my student room, I like it and it belongs in Leiden, but does it belong in a park?

Well, the answer is yes! The facility itself is clean and without weird fumes or noises and the whole area around is a nice park with some monumental old industrial buildings there (the energy park and huigpark).

More important, the DutchReview office is here! As you might know we have an office at PLNT, the innovation hotspot of Leiden. PLNT itself is sort of a spot in the Singelpark too as the building has a kick-ass rooftop garden with all kinds of natural gimmicks and awesome vista’s. 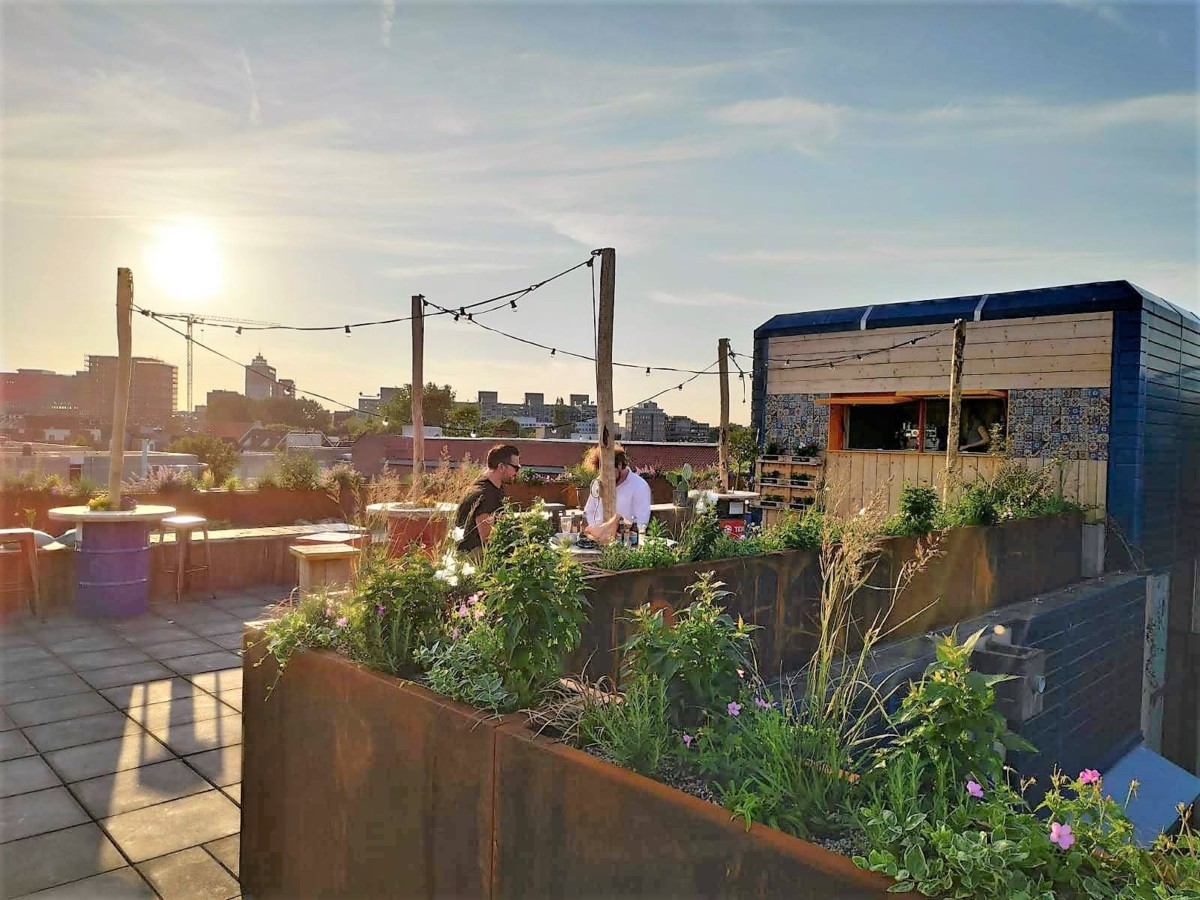 Zijlpoort, one of those gorgeous gates to Leiden

As you can see on the Singelpark map, there’s a certain kind of shape of the ‘Singels’  around Leiden. In the olden days, we’re talking 1500-1700’s here, these canals were used for defence against attackers (damn Spaniards!) and naturally there were spots to open the gates and let visitors in. The ‘Zijlpoort’ is one of these passages, it dates back to 1667 and it’s one of the prettiest buildings in town.

You can eat at the Zijlpoort too, as the fish ‘brasserie’ de Poort is located there (article about classy eatings in Leiden right here). Really close to the Zijlpoort is the massive Meelfabriek which is also part of the Singelpark route, a giant grain factory which is being redeveloped into apartments and other things.

The Plantsoen is a lovely piece of park in Leiden-Zuid. It’s truly a place of leisure and there are grassy plains, stately trees, a large fountain and even a birdhouse. You can spot some of the prettiest monumental houses of Leiden while you walk through a beautiful English landscaped park.

Did you know that the city of Leiden is home to one of the oldest botanical gardens in the world?

The University of Leiden was responsible for planting the first seeds in this historical garden, lovingly called the ‘hortus’ by its inhabitants. You can enjoy a day in the sun and stroll through the garden for a relaxing day as we say goodbye to the cold winters.

Another highlight is the classy observatory which is located, more or less, in the hortus.

Did you know Rembrandt was born and raised in Leiden? Along the route of the Singelpark you will find a cute little park perfect for sunbathing and watching the boats pass by. It’s the Rembrandt Park!

More or less at the end of the Singelpark is the Volkenkunde museum. (spoilers: no end, it’s a loop, that’s the idea of a singel). The garden of the museum is now also part of the Singelpark.

The Volkenkunde museum has objects from around the world, like China, Indonesia, Japan and Korea. It’s close to Leiden Centraal and the windmill, our ‘starting point’ of this tour through the Singelpark.

An important feature of the Singelpark is the input and commitment of the residents of Leiden. The Singelpark is not an ordinary park that the municipality has set up as you would expect from a new park. Residents, stakeholders, interested parties, companies and the municipality have teamed up to make this all possible; from concept to putting the shovels in the dirt and getting their fingers green, the citizens of Leiden were the heart and soul of this project.

The ‘Friends of the Singelpark Foundation’ brings people and organizations together who want to realize and maintain this dream that’s called the Singelpark. And perhaps you’re reading this, love Leiden and are thinking: I want to be part of this too!
Well, good news, you can! By supporting financially as a ‘friend’, but above all by rolling up your sleeves yourself: planning and planting, maintenance and management, feel welcome to get involved.

What else is there to visit in Leiden?

Need another reason for visiting Leiden and the Singelpark? There are more than a few! 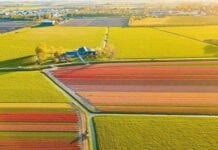