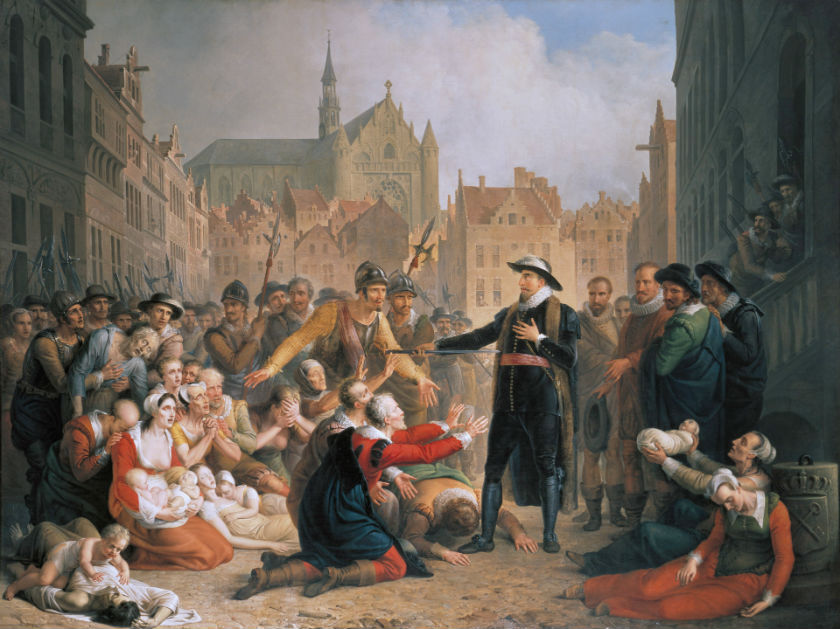 Every year there’s one day that all native ‘Leidenaren’ look forward to and that’s October 3: Leidsch Ontzet. It’s the day that all citizens of Leiden get drunk and eat ‘hutspot’ and herring with white bread. It might be the only day that the student population in Leiden intermingles with the native population, as they sing the Leiden anthem or the October 3 song of ‘Rubberen Robbie’ together in brotherly love.

From my own experience, I can tell it is truly the most beautiful day of the year. For the people who, sadly enough, don’t know what I’m talking about, I will explain this exceptional phenomenon to you and clarify some of the scenes you might see at this day and which you might judge as completely crazy.

A pretty long time ago, the Dutch were at war with the Spaniards in the so-called Eighty Years War between 1568 and 1648. Of course, this war was about religion, independence, and power, like all the wars at the time (except the price war of the supermarkets at the beginning of this century). We were fighting against the Catholic King Filips II, who was a repressive old crook that didn’t want us to be Calvinists and independent. This was obviously ridiculous and so we legitimately rebelled against this paella-creep.

The city of Leiden was attacked by the Spaniards for the first time in October 1573. But under the guidance of Francisco de Valdez, they were distracted by Lodewijk van Nassau’s Dutch army. He was one of the two younger brothers of the Dutch rebel leader (or freedom fighter) William of Orange. Therefore he had to help his Spanish colleagues at the Mookerhei (nearby Nijmegen) where this Dutch crook was settled. He then had to give up the siege of Leiden on March 21, 1574. But the Spaniards came back to lay siege to Leiden – with 5000 men – and this time it lasted until October 3.

In the meantime, the citizens of Leiden didn’t have enough food and diseases spread all over the city. Thousands of people died from starvation and the plague. The city secretary Jan van Hout and the leader of the troops Jan van der Does were stubborn as hell and didn’t want to surrender to this Sangria-dude, even though Valdez wanted to seduce the ‘Leidenaars’ with sweet promises for a truce. It was a heroic fight, especially when Mayor Van der Werff offered his arm as food to his starving people. Such self-sacrifice must certainly be remembered for eternity…even though it’s a myth.

On October 3, 1574, the siege came to an end, because of William of Orange’s genius plan. He decided to flood the surrounding areas of Leiden by making holes into the dykes of Holland to expel the Spaniards. When the surrounding areas were flooded at the beginning of October, the ‘Watergeuzen’ (water rebels) were making their way to Leiden to set the citizens of Leiden free. The cowardly Spaniards totally panicked because of the water and the Watergeuzen, and so they ran away like chickens – back to where they belong.

The people came out of their houses to see if the Spaniards were really gone. The only thing the Spaniards left was a porridge pot with hutspot (mashed potato and vegetable dish), while the Watergeuzen brought herring with white bread into the city. First thing in the morning, all the citizens went to the Pieterskerk, where they thanked God for this miracle that happened. And so we thank God for his effort until this day and honour this miraculous moment by drinking as much as we can, every year on October 3.

First thing you do in the morning you do on October 3 is to pick up your herring and white bread at the Waag. Then you go back to bed because you have a hangover from the night before. That’s because the real party will take place in the night from the 2nd to the 3rd of October. On October 2, you are going to eat hutspot in the evening before you go into the city and get drunk.

After finishing this ‘Dutch delicacy’ of hutspot with family and friends, you go to the city and take a look at the magnificent Taptoe. After that, you should walk around the fair in the city, which is everywhere between the Central Station and the Breestraat. You can’t miss it. At the fair you should eat some deep-fried doughnuts and go into some attractions until you are going to vomit.

Did I mention that you should drink alcohol all the time while doing these things? Well, you should! Then, while being a bit tipsy or drunk already, you can take a look at all the stages in the city where you can listen to all kinds of music, especially those you don’t want to hear when you’re sober. Then it’s around midnight and you slowly move to a pub, after seeing the fireworks at the Zijlsingel. The pub you are going to choose should preferably be one where it’s extremely hot and everyone is drunk, and where the party lasts until the sun comes up. If you’re able to walk at the end of the evening, it’s allowed to go to bed before you pick up your herring and white bread the next morning. And when October 3 is over and you did all the same in the evening from the 3rd to the 4th of October, sadly enough you have to wait another year before this magnificent event starts all over again.

Does this sound like a fun holiday for you? Will you be going to Leiden? Let us know in the comments below!