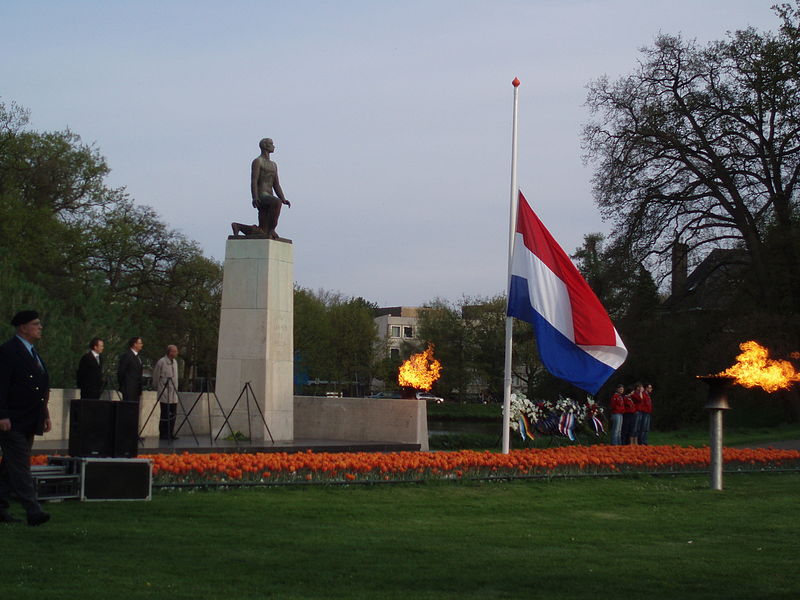 What is National Remembrance Day in the Netherlands?

National Remembrance day in the Netherlands (Dodenherdenking) is held on 4th May, every year. It’s a day when the Dutch can remember and commemorate the soldiers and civilians who died in WWII and other conflicts. This takes place during a 2-minute silence, at 8 pm on that day.

The official service is held at the National Monument in Amsterdam (Dam square), where people also do a 2-minute silence, conduct speeches and lay wreaths (the King and Queen even attend). Dam square is where the main commemoration takes place, as this is where the first ever commemoration took place, many years ago. During this 2 minute silence, TV and radio stations broadcast the ceremony, public transport stops and people stop what they are doing. It’s good to know that Remembrance day is not technically considered a public holiday.

A lot of Dutch people participate in the commemorations of National Rememberance day; young people and adults do observe the 2-minute silence, and believe it is important to do so. However, teenagers in particular want more attention to be paid to current wars and victims, reports NOS. Apart from just the silence, many people hang the Dutch flag out on this day. Flags are also apparently flown on this day at half-mast from 6pm till the sun sets. This signifies the mourning process, but the next morning they are flown as normal. This is the day that the Netherlands celebrates Liberation Day.

So why is it on the 4th and not the 5th of May? Well, there is a good reason for that. The most important reason being that after WWII ended, some people deemed it inappropriate to be celebrating their liberation, and mourning victims within the same day. They don’t really connect well and so it was decided that there should be a day dedicated to mourning and a day dedication to celebrations.

4 Mei – National Remembrance Day in the Netherlands: How can I get involved?

Commemorations are held all over the Netherlands on the 4th of May. The main one being on Dam square – however this is by far the busiest, as it is the main location. There are also commemorations at the war cemetery at Grebbeberg. Waalsdorpervlakte, located near the Hague, also broadcasts the commemoration (this is where a lot of the Dutch resistance fighters were executed during WWII). In some large cities (mainly in the squares or near the town hall) commemorations take place. Even in small towns, flowers are placed and flags flown at half-mast.

People do not just attend commemorations to get involved in national remembrance day (so don’t worry if you can’t). Many people choose to pay their respects by holding their own 2 minute silence, or if they are out, joining others in spending just 2 minutes stopping what they are doing and paying their respects.

Remembrance day in the Netherlands hasn’t been without its controversies. Every year there is usually some form of discussion over whether the Dutch are mourning the correct victims, whether we should be mourning more victims, whether we should be mourning at all, even. Discussions range from opinions such as ‘the current generation have not experienced it, so there is a bit of a disconnect, should we be remembering victims from before their time?’, ‘why aren’t we remembering all victims of the war, historical and present-day?’ and ‘should we have more remembrance days dedicated to different periods?’, the discussion goes on and on every year.

DutchReview covered a story recently about people conducting noisy protests during remembrance day. This hasn’t been the first time the 2-minute silence that has been disturbed and it probably won’t be the last.

In 2010 a disturbed man started screaming and caused some chaos and fear at the ‘dodenherdenking’ in Amsterdam:

‘Anti-racist protesters’, argue that remembrance day is racist, as it focuses too much on the white victims and has little consideration for other victims of the war. Despite this, the Netherlands does commemorate victims of the Dutch East Indies on 15rh August, and also for the Holocaust victims on the last Sunday of January.

How will you be paying your respects this year on National Remembrance day in the Netherlands? Will be you participating in the silent moment of 2 minutes on the 4th of May? Let us know in the comments.