Imagine yourself as a visitor to the Netherlands, and arriving here after having read so much about the history of this wonderful country. You’re expecting beautiful Gothic cathedrals, a strong Protestant base, a large Catholic following, and perhaps a small atheist minority, only to be hit with a big surprise.

Oh, there are beautiful Gothic church buildings, but it is the atheist majority that will totally take you unawares. Imagine visiting some nightclubs and bars only to find out that they were once churches. While that may be difficult for some to imagine, the fact remains that if you observe the Dutch closely you’ll definitely notice a Calvinist nature to them.

Most visitors to the Netherlands often find it quite fascinating that a nation of mostly atheists still models its life around the teachings of a 16th-century religious preacher like John Calvin. But, before we go any further on the Calvinist nature of the Dutch, let us find out what Calvinism is all about.

First things first, what is Calvinism?

Calvinism is a major branch of Protestantism that follows the theological teachings of John Calvin. While the core doctrines are predestination and election, its basic principle is that the Bible must be interpreted by itself. This means that the parts that are harder to understand are explained in other passages, where the Bible is more explicit on the matter. Simply put — if you don’t understand a passage in the Bible, just read on. There are sections of the Bible that explain the ones you previously didn’t understand.

How does Calvinism relate to the Dutch?

It is no secret that the Netherlands has been a Protestant nation since the beginning of the Protestant Reformation in the 16th century. Martin Luther and John Calvin’s teaching were very popular among the Dutch. Even in the period when King Henry VIII of England was having a feud with the Catholic Church, the region that is now the Netherlands was already a strong Protestant part of Europe.

Calvinism arrived in what is now the Netherlands in the 1540s, as both the nobles and the common folk converted. Under Phillip II, the Spanish government started harsh persecution campaigns against the Dutch. As a reaction to this persecution, the Calvinist population rebelled. History buffs never forget the Beeldenstorm in 1566. The Beeldenstorm is a Dutch term that refers to the wave of disorderly attacks carried out by Calvinists in the summer of 1566, that spread rapidly through the Low Countries from south to north.

These Calvinist Protestants destroyed Catholic art and many forms of church fittings and decorations. It was in that same year that William of Orange started the Eighty Years’ War in order to liberate the Calvinist Dutch from the Catholic Spaniards. There was definitely little love for Catholics or Catholicism in the Netherlands back then and driving the Spanish away was one extraordinary way of showing it.

Atheism in the Netherlands

It is already an established fact that religion isn’t a trend in the Netherlands. I’m pretty sure more Dutch people have read Harry Potter than the Bible and the majority of them probably only say Jesus Christ (Jesus Christus!) out of frustration rather than in a moment of prayer. Still, religion in the Netherlands remains an interesting topic of discussion.

Results of research carried out at the Vrije Universiteit Amsterdam in 2016 showed a steady decline in the number of Christians or believers in the Netherlands. This has led to the Netherlands no longer being seen as a Christian nation. The truth is, the country has not been considered one for a very long time.

The research provided evidence to the fact that more than 82% of Dutch people no longer attend church or believe in God. It also stated that there were more atheists (25%) than theists (17%) in the Netherlands.

But the question still remains: how is it that a nation with an atheist majority does so well at living by the teachings of a religious preacher? Before we answer that, let’s find out who John Calvin was.

Calvinism in the Netherlands: Who Was John Calvin?

John Calvin was a French theologian, pastor, and reformer in Geneva during the Protestant Reformation. He was a principal figure in the development of the system of Christian theology which later came to be known as Calvinism. Being one of the fathers of Protestantism, he played a major role in how the Netherlands went on to become a Protestant nation. Although born into a family of the Catholic faith, he converted to Protestantism in 1533 after studying philosophy, humanism, and law.

While John Calvin may never have set foot in the country, his teachings in the period of the Protestant Reformation found fertile soil nowhere else than in the Netherlands. Almost every political party (in the late 1800s) adopted his teachings. Despite him not being Dutch, there is pride the Dutch feel when his name is mentioned. They see him as one of their own.

So why do the Dutch, who aren’t really religious, adhere to John Calvin his teaching?

If you’re a foreigner keenly observing the Dutch, you’ll notice how hardworking, frugal and straightforward they are. A look into the history books will tell you that the Dutch statesman and theologian Abraham Kuyper played a big role in reviving Calvinism in the late 1800s.

A true believer in the separation of church and state, he and other lawmakers of his time took it upon themselves to follow in the footsteps of Calvin in breaking the yoke of Catholicism in the country. Their reforms (which were very Calvinist in nature) laid the foundation of what the Netherlands is today.

They were able to build a society based on integrity, respectfulness, acceptance, perseverance, reliability, self-discipline, and efficiency. This is one of the reasons why, despite always being at war with the sea, the Dutch never lose or lag behind in showing how efficient they are with their dykes.

For me personally, the Netherlands remains a wonderful country full of wonderful people. Of course, it has its problems mostly with racism but it is also a country where hard work is valued, justice is frequently served, and talents are nurtured (and appreciated). Being open-minded and straightforward is a way of life. When a Dutch person lends you money, they expect you to pay back at the exact time you promised. Not because they would go broke without the money they lent you but because of the principle attached to it.

Your word is your bond and if you don’t live up to your word, you will definitely be confronted. The Netherlands is a perfect example of how you can be an atheist liberal (or progressive) and still live by the moral teachings of a religious preacher. It is a testament to the fact that even if one is an atheist, one can still choose to take good things from any religion.

Even years after the death of John Calvin and the Dutch statesmen who laid the foundation of the society we know today, it is evident that while religious beliefs may not hold sway in the Netherlands, their virtues still linger. The Netherlands is one of the world’s most liberal nations, and its inhabitants are generally described as sober, reserved, conscientious, rule-driven, and well-disciplined: all typical Calvinist characteristics.

Calvinism in the Netherlands is no longer tied to religious beliefs as it once was. However, it has developed into a way of life for the Dutch. Millions of Dutch citizens are atheists but the funny thing is that they all lead lives that can be described as Calvinist in nature.

Any other opinions out there on Calvinism in the Netherlands? Feel welcome to share them in the comments!

Feature Image: WikimediaImages/Pixabay
Editor’s Note: This article was originally published in February 2018, and was fully updated in March 2021 for your reading pleasure. 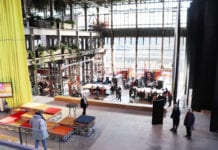 The 11 most beautiful libraries in the Netherlands