Giethoorn: The Chinese Venice of the Netherlands

Are you the sophisticated, cosmopolitan tourist type, someone who likes to dip their chips in tomato, mayonnaise and honeymustard all at the same time?

Then the Netherlands’ very own cultural fusion tourist spot of Giethoorn should be your first port of call this summer. 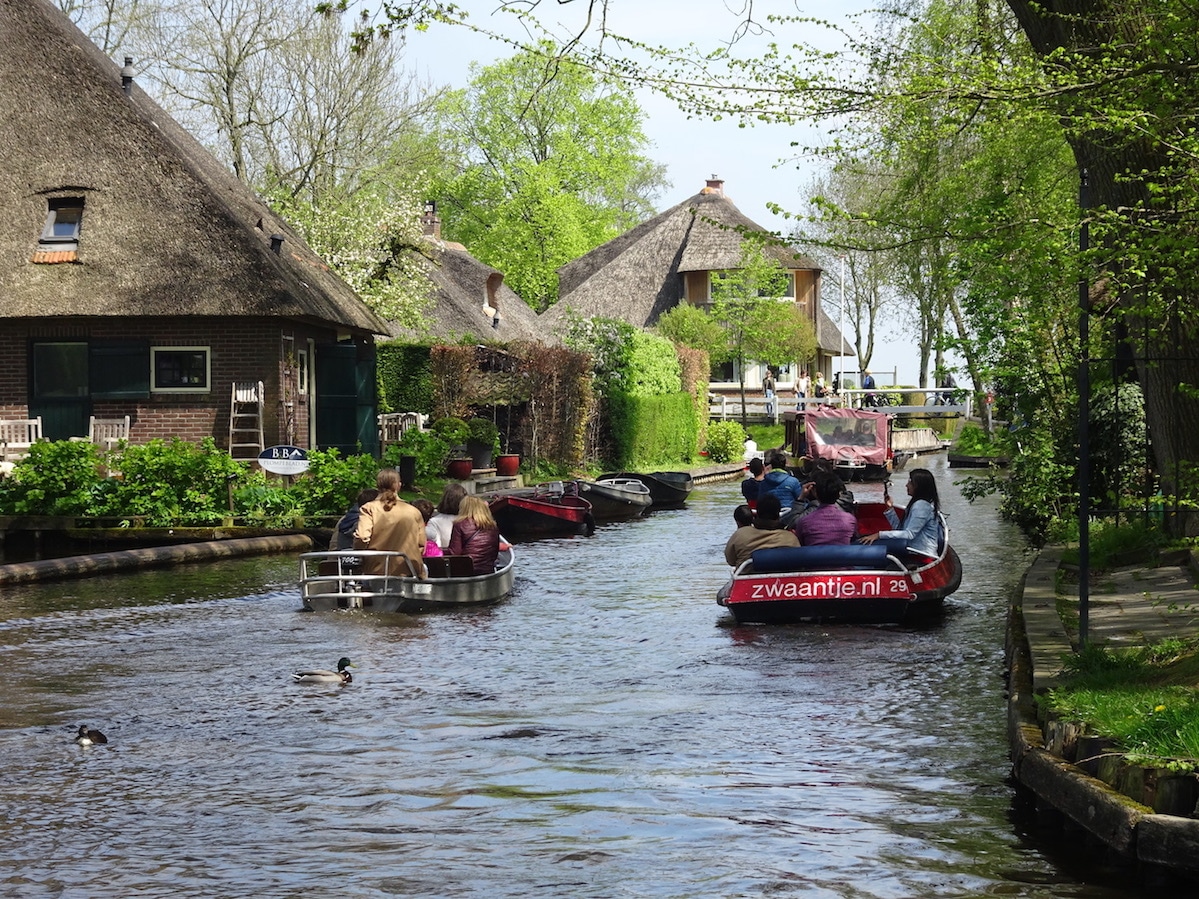 Sitting in a café in the glorious, if rare, Spring sun of Giethoorn in the north of Netherlands, two beers deep, it’s hard not to feel far more intoxicated. Not only by the tranquil beauty of the place, but by the bizarre ménage a trois of culture occurring all around you.

Despite being a relatively small town, Giethoorn has become a popular tourist spot due to its reputation as the ‘Dutch Venice’. This is almost certainly down to the fact that there are no roads in the town, rather than its one overpriced Italian ice-cream shop.

Residents and visitors to Griethoorn must navigate its winding suburban paths and thatched houses by foot, or alternatively rent a boat and hope you’ve got the reaction speed to steer out the way of dozens of twenty-foot tourist barges clogging the narrow waterways.

Despite receiving around 800,000 tourists annually, the town’s website still boasts of the serenity “the loudest sound you can normally hear is the quacking of a duck”. Whilst you can add bus-loads of tourist chatter, snapping cameras and drunken boaters to this boast, it does feel surprisingly apt.

Yet while escaping the noise of ‘the big smoke’ for some canal-side duck quacking might be reason enough to give Griethoorn a visit, the most intriguing aspect of the Dutch Venice is its proportion of Chinese visitors.

Arriving at Steenwijk train station, the most convenient stop if you’re coming from Amsterdam or Groningen to the north, you’re greeted in the tourist office/bus station by a Chinese speaking employee, who hands you a map of the local area in Chinese. You then get on a fifteen minute bus filled to the brim with Chinese tourists, and a couple of token Germans. Upon arriving in the town you immediately notice that most of the bar, café and boat rental signs are written in Chinese, Dutch and English, often in that order.

Chinese tourists are a pretty common and welcome site in most European tourist hotspots nowadays, but why has this little ‘Dutch Venice’, that most travellers from Europe have never heard of, and most Dutch natives seem to know as “that place with the boats and all the Chinese people”, attracted such attention from our eastern brethren?

The answer apparently lies in a popular documentary called Ni Hao Holland. The presenter ‘Cherry’ lives in Beijing, but dreams of swapping the hectic city life for, you guessed it, Giethoorn.

Thanks in large part to the success of the film, and prolific word of mouth, many Chinese travellers are in love with the village, which many even refer to as “Garden of Eden”. Having spent a sunny day wandering the town it’s hard to disagree with them.

So if mono- or bi- tourism bores you, and you’re craving a more diverse, tri-velling experience this summer, I suggest you follow the noise of quacking ducks to the ‘Chinese Venice of the Netherlands’.