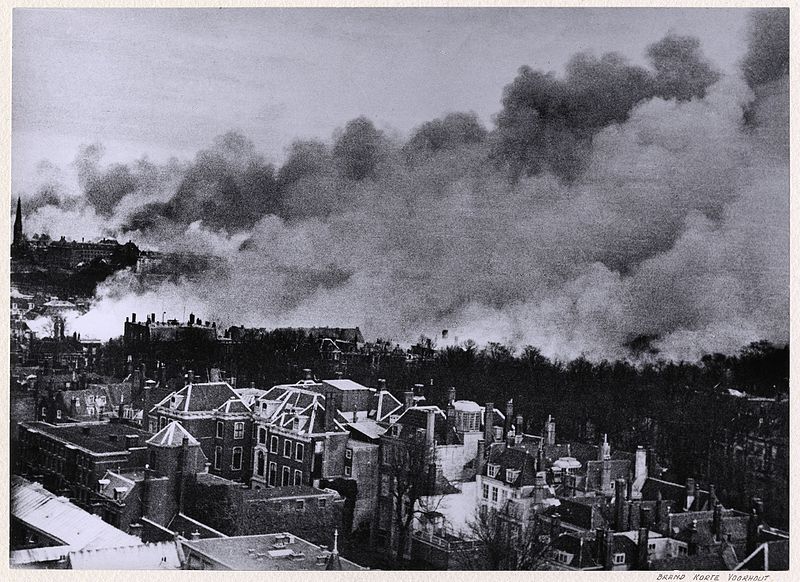 The story of The Hague during World War II is a tumultuous one. From V2 rockets installed in the Haagse Bos to the accidental bombing by the British forces, The Hague has definitely been marked by the war.

To better understand the city during the war, we’ll need to go on a historical exploration through one of the darkest periods of Europe.

The German invasion of the Netherlands started relatively early in the war. The Netherlands was neutral officially but was also kind of expecting a German attack, the Dutch plan was to fall back behind their ‘water’ defences in the western part of the country — the so-called Fort Holland.

For The Hague, the Germans planned to overwhelm the city through an aerial attack and secure the airstrips and the city itself. Part of the plan was also to capture the royal family, who were located in the city.

Early in the morning, German planes flew over The Hague, as part of their scheme to deceive the Dutch into thinking they were attacking the UK instead. However, the Dutch were alarmed by the planes.

The German forces managed to capture some of the airfields in and around the city, but failed with their main objective of capturing the city and the royal family. After a Dutch counter-offensive the same day, the Germans troops retreated and lost their initial progress.

But the successful counter-offensive of the Dutch forces in The Hague was short-lived. On May 14, in the aftermath of the Rotterdam Blitz, The Netherlands capitulated.

The following years were marked by a harsh German occupation. The Jewish community of The Hague, the second largest in the country, was deported and almost completely exterminated in Auschwitz and other Nazi camps. Roma residents of the city also met their demise in extermination camps.

By 1943, the Atlantic Wall was being constructed near The Hague. This involved many demolitions around the coastal areas of the city, with tens of thousands of residents being forcibly displaced out of their homes. The coastal defences formed by the Atlantic Wall were made in order to prevent an Allied invasion from the seas (spoilers, it didn’t work). The Atlantic Wall had a great impact on the city, and its legacy is still visible to this day, be it in the bunkers by the coast or the dramatically changed areas following demolitions.

The V2 rockets of the Haagse Bos

By 1944, it was becoming increasingly clear that Nazi Germany was losing, and that it was only a matter of time until Allied victory. The German forces pushed hard during the last stage of the war, in a desperate attempt to turn the tides.

Part of the projects to push back were the infamous V2 rockets. This expensive rocket was the world’s first long-range guided ballistic mission. Development was long and expensive, but starting in September 1944, around 3,000 V2 rockets were launched by the German Army, targeting London and later on, Antwerp and Liege in Belgium.

In The Hague, mobile launch units were placed in the Haagse Bos (Hague forest) and the Duindigt racecourse. The forest, extending on a long and wide strip, presented the perfect spot to launch rockets, given its dense foliage. In November of 1944 alone, German forces launched 82 rockets from the Haagse Bos towards London.

Like all projects that are rushed due to time constraints, the rocket had some technical issues. Its guiding system was quite rudimentary and it wasn’t guaranteed that they would hit their targets. The Germans launching the rockets could only cross their fingers and hope that the rockets successfully passed the North Sea and hit London.

While a formidable psychological weapon, the V2 rockets were less successful at a practical level in helping the Nazis hold off Allied invasions. With Allied bombings from the air, the Red Army marching through Eastern Europe and the D-day landings bringing Allied forces on the Western Front, the Axis were on the verge of losing the war.

The accidental British bombing of Bezuidenhout

On March 3, 1945, just around a month and a bit before the end of the war in Europe, the British Royal Air Force commenced on a mission to bomb the V2 installations in the Haagse Bos.

The pilots were given wrong coordinates and with foggy weather they ended up accidentally bombing the residential neighbourhood of Bezuidenhout, located nearby.

The bombings destroyed most of the neighbourhood, killing 511 people. When they realized their error, the Royal Air Force dropped flyers apologizing for the mistake. Trouw, the Dutch resistance newspaper at the time, wrote the following about the bombings:

“The horrors of the war are increasing. We have seen the fires in The Hague after the terrible bombings due to the V2-launching sites. We have seen the column of smoke, drifting to the south and the ordeal of the war has descended upon us in its extended impact. We heard the screaming bombs falling on (the) Bezuidenhout, and the missiles which brought death and misery fell only a hundred metres from us. At the same time we saw the launching and the roaring, flaming V2, holding our breath to see if the launch was successful, if not falling back on the homes of innocent people. It is horrible to see the monsters take off in the middle of the night between the houses, lighting up the skies. One can imagine the terrors that came upon us now that The Hague is a frontline town, bombed continuously for more than ten days. Buildings, burning and smouldering furiously, a town choking from smoke, women and children fleeing, men hauling furniture which they tried to rescue from the chaos. What misery, what distress.”

The war in Europe ended not long after that, on May 8, 1945. The Dutch went quickly to reconstruct what was lost in the war, most notably in Rotterdam. The areas affected in the Hague were also reconstructed, following a construction boom in the 1950s and 1960s.

The war might be long over, yet the scars remain. If you ever find yourself in Bezuidenhout, you’ll find different signs telling the stories of the bombing and you can go on a little walking tour to find all of them.

Have you learned anything new about the war in the Netherlands? Let us know your thoughts in the comments!

Feature Image: The Hague Municipal Archives/Wikimedia Commons/Public domain
Editor’s Note: This article was originally published in August 2020, and was fully updated in January 2021 for your reading pleasure.