I ♥ the Zwarte Piet discussion

The zwarte Piet debate remains so vivid in Holland! I’ve expressed myself on the subject before as have others and Everyone is probably sick and tired of talking about it or is remaining mum to avoid an avalanche of shit coming their way. Arguments have been flying back and forth, insults have been expressed, death threats have been made and friends have been defriended. 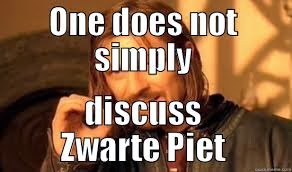 But have no fear, I won’t be discussing Zwarte Piet itself. I have little to add. I might roll my eyes a little. What I would like to do however is to share my affection for the debate surrounding Zwarte Piet. I’m serious!

It’s such a fascinating case study. Because it says so much about Holland and how the Dutch deal with racism and relate to it or more accurately have difficulty relating to it.

Holland has had a history of avoiding tough debates. When we go all the way back to the dawn of the twentieth century, most Dutch belonged to their pillars (reformed, catholic, protestant, socialist) and conversation and debate occurred mostly within the pillars, but not between those belonging to different pillars. It was a time when people wanted to live and let live, not judging each others believes. People remained in their own groups. This was especially the case decades later during the fifties when Holland had to be rebuild post WWII.

The exchange of ideas and values was mostly trusted to the smart and earnest polticians (oh, how times have changed). Most issues were solved behind the closed doors of our house of representatives and our senate. Open discussion was not likely. Even our politicians and executives  favored compromise over conflict with the poldermodel, a model in which all parties are willing to compromise to reach the best possible option for every party involved (read: nobody really gets what they want).

After a polarizing seventies and eighties, and seeing how governance became impossible when everyone sticks to their guns and no one is willing to compromise, the ninetees brought the Poldermodel back with a vengeance and topped it off with some multiculturalism. It became THE utopia to strive for. As admirable as it was, it created a new shiny and fake air of tolerance. People of all ethnicities were welcomed and believed to seamlessly slide into the warm womb that was Dutch society. One problem: the parameters of this integration and this inclusion were never really discussed or formulated clearly. Just hush and you will be Dutch! I’ll let this commercial speak for itself.

Then the murder on Theo van Gogh , the rise of Pim Fortuyn and later of Wilders happened in the zeros and now we are on the road to polarization once again. The EU is looming over Holland and is threatening to devour the Dutch cultural identity, Syrians are flooding Holland and now people want to take away zwarte piet?!?! He is central to the whole tradition of Sinterklaas, I mean who the f*** is Sinterklaas without zwarte Piet?!?!

Why is all this relevant to the zwarte Piet discussion?

Well.. we just never really discussed racism. I’ts not part of the Dutch cultural DNA. Our ideas of racism are based on the import from the hardships of African Americans in the States in films such as American History X, The help, 12 years a slave and tv shows like Roots. No one would ever want to be labeled a racist  like that, especially not with our believes firmly rooted in the multicultural nineties. Not to mention our cultural trauma with the deportation of the jews during the second world war. We despise racism. We despise racists

But now here are people who start calling Zwarte Piet a racist tradition! So all of a sudden everyone who willingly participates in this tradition that has been practiced time and time again (and in different incarnations) will be labeled as a racist. A racist just like those awful KKK people, burning crosses, splitting jaws on sidewalks and just like those sadistic slave owners from back in the day raping black female slaves as often as going to the bathroom.

And that is where so many dutch start protesting. How dare someone calling them racists when they have enjoyed the Sinterklaas festivities for decades without ever knowingly or intentionally being racist? They feel like they are being associated with the worst of racist scum out there. How can you compare me with these awful racists especially for something as ‘innocent’ as Sinterklaas.

As a defense mechanism many Dutch start putting their time and energy in denying being racists and trying to debunk zwarte Piet as a racist tradition. This leads to hilarious argumentations and an even funnier documentary that is being made to prove Zwarte Piet is not really all that zwart!

But that’s where the difficulty lies with racism. Racism and racists go together often, but are still different things.

Racism is something institutional and in existence within a certain system or community. It’s a way of thinking that’s normalized and not controlled by one particular individual or person while a racist is the embodiment of those ideas and judgements within one individual. But what happens if a tradition is redefined as racist?  Does a racist tradition naturally create racists? Can we use racism and racists interchangeably? Of course not. Especially when a redefinition of a tradition as racist occurs so quickly.

Can cultural reflection occur that quickly on a societal scale?  Often it can take decades if not more to create awareness. As if there is a clear end in sight to racism which some societies have reached.  Racism occurs, but the Dutch racism is nowhere near the severity of the States of police brutality, discrimination and educational and economical disadvantages or of the aboriginals in Australia. Blackface has never been perceived as the pernicious activity it has been in the States.

It doesn’t mean there is no racism. But it seems to be a completely different creature, in both size and velocity. Debate and the friction are inherent to racism. When a particular minority within society marks something as racist it seems natural for a larger part of society to deny or to question it.  That’s how racism works and what makes it systematic and pernicious. Otherwise people would go get their racism vaccines en masse and be done with it.

It’s in the discussions of ideas and what is and what is not racist where change occurs, in the exhange of stories and experiences. There are no easy answers since Holland has it’s own unique cultural heritage. Holland still needs to find its vocabulary, create its own unique discourse surrounding racism and learn how to talk about it.

We have to consider that in Holland big discussions about racism have been shunned before because of pillarisation, poldermodels and multiculturalism. We have only recently started to explore and acknowledge our past involvement in the slave trade and our very painful role in the decolonisation of Indonesia. These are things that take time and a lots of discussion: an ongoing conversation in which Zwarte Piet is only but a tiny subject matter and a starting point to start discussing other subjective experiences of racism.

I ♥ the Zwarte Piet Discussion

And so I’m probably one of the very few in Holland saying this: I love this discussion. In all its viciousness, meanness and ugliness. That’s where the change occurs.

We will be discussing this yearly.  And things are already changing. Commerce is avoiding portrayals of zwarte piet like the plague. Childrens TV shows are slowly opening up to different interpretations.

But even after zwarte piets make over, other issues will pry for a moment in the spotlight. Because this is what happens when we remove the fake tolerance of our multicultural naive utopia from the ninetees. The discrepancies of what we consider racism and not, what we consider appropriate and not, and what is Dutch and what is not come to the foreground and will need to be discussed to keep any societal coherency.

It should be ok to openly discuss what it means to be Dutch and to include Dutch ethnic voices in that mix, to let them speak and to actually listen to them. They are Dutch and so are their experiences. So let’s not exclaim that people should go back to their own country, because for many of the critics that very country is Holland.

Many more death threats will follow, many ugly insults will be thrown. Try not to defriend people and keep the conversation going with people you do not agree with.

Embrace the friction! It’s not about reaching a racism free nirvana. It’s about sharing stories with each other and making our experiences visible. Ask people about their warm and fuzzy experiences with Sinterklaas or about their troubles with zwarte piet.

But above all let’s move beyond the point of calling people racist. The focus should be on racism and discussing the terms of racism. Calling people racist just creates a deadlock in Dutch context with people becoming desperate to prove their innocence.

Well alright, there are exceptions. Those people sending death threats and using racial slurs against those who verbalize their hardships… Those are tragic backwards racists! Those are the real dummies.

By all means ignore them. Or better yet: Zwarte Piet, you can take those naughty adults back with you to Spain after the fifth of December! 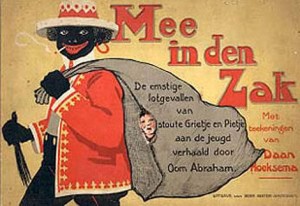 Well, it's officially oliebollen season in the Netherlands, so it's only appropriate to address this quirk now while it's fresh,...