10 World Heritage Sites in the Netherlands: the best monuments of Holland 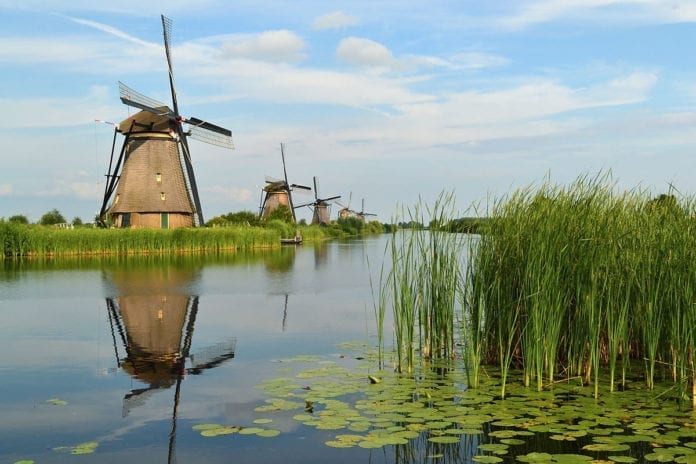 There are 10 World Heritage sites in the Netherlands; here are the grand monuments in order of their ‘World-Heritage-site-birthday’.

World Heritage site in the Netherlands since 1995

As an archaeological monument and former island, Schokland and its surroundings possess a mysterious past. This World Heritage site (gosh that really is a mouthful) lies within the centre of Noordoostpolder, and is steeped in cultural history. It’s home to a sweet old church, a lighthouse keeper’s house and the Schokland Museum. According to Statistics Netherlands, there are just five people living there (!?).

Why is Schokland a World Heritage site?

Due to the rising sea level, by the 19th-century residents of Schokland had retreated to the three most elevated parts of the land, until a major flood in 1825. Archaeologists found a wealth of (largely undamaged) treasures buried in the ground. There is evidence of human habitation going back more than 10,000 years (that’s prehistoric yo!) and they’ve dug up all sorts of things, from earthenware, tools and man-made mounds, to the remains of houses and churches – and even entire graves! (eeek!)

The Defence Line of Amsterdam

World Heritage site in the Netherlands since 1996

AKA the Stelling van Amsterdam. This is a ring of 46 forts, more than 135 km long, around the city. Built between 1883 and 1920, the line of defence was erected to protect the national stronghold.

As well as the fortifications, the ring consists of an intricate system of dikes, sluices, canals and inundation polders. In the Middle Ages, the Dutch created a defence system based on these inundations, which basically refers to its flooding areas. This means if people were to attack, the lower parts of the country could be flooded to make the area impassible. Genius thinking to make use of what you’ve got, Dutchies!

World Heritage Site in the Netherlands since 1997

Willemstad is a town on the Caribbean Island of Curaçao. (Yes, you read that right; if you didn’t already know, some municipalities of the Netherlands are located in the Caribbean sea!) Williemstead, a cute and colourful port town, is where the Dutch established a trading settlement.

What makes it a World Heritage site?

The site has become a symbol of a growing multicultural community within the Netherlands.

The Windmills at Kinderdijk

World Heritage Site in the Netherlands since 1997

In South Holland, the Windmills of Kinderdijk-Elshout is a charming Dutch Mill Network and famous man-made landscape built in 1738 and 1740. The area is constructed in a similar way to the Defence Line of Amsterdam, with polders, embankments and dykes, 19 drainage mills, 3 pumping stations, 2 discharge sluices and 2 Water Board Assembly Houses, which work for the drainage of the land. The windmills essentially keep water out of the polder.

The technology of handling water

Okay, maybe not the most exciting sub-header you’ve ever seen, but this a vital part of the history of the Netherlands; the Dutch made a huge contribution to this type of technology, and these historic windmills can be seen as a way of paying homage to that (as well as just being a pretty sight).

World Heritage Site in the Netherlands since 1998

Another celebration of technology! Damn, they weren’t kidding when they said the Netherlands was the land of water. This World Heritage site is a steam-powered pumping station, meaning it pumps excess water out of Friesland. It is the largest station of its kind that’s still in use, which is pretty impressive considering it opened in 1920. It now runs on heavy fuel oil and has the capacity to pump up to 4,000 cubic meters of water per minute!

The Woudagemaal is located in a busy seaside town called Lemmer. There’s a visitor entrance which provides you with all the history about the site, an interactive museum experience which the kids will love, and regular tours.

World Heritage Site in the Netherlands since 1999

Since the 17th century, the Beemster Polder, a beautiful green expanse in North-Holland, has been incredibly well preserved. The entire place used to be a mostly water – a lake, in fact! Now, thanks to ingenious and intricate planning, it’s an agricultural landscape made up of fields, roads, canals, dykes and settlements. Middenbeemster, a little town in the countryside with horses, moats, drawbridges and a central market square, is sure to be a lovely outing in the summer.

World Heritage site in the Netherlands since 2000

Rietveld Schröderhuis, located in Utrecht, is an outstanding piece of architecture designed in 1924 by Gerrit Reitveld. It was built at the request of Truus Schröder-Schräder, whose husband had recently died. Schröder played an important role in the design process because she knew she wanted it to be simple, spacious and free. She actually asked for it to designed without walls, so it didn’t constrain her or hide the truth of her emotional life with her three children. She wanted fluidity and a connection between the inside and outside to mirror their new commitment to openness.

Mrs. Schröder lived in the house until her death in 1985. The house was restored by Bertus Mulder and is now a museum where you can find out more about her life and the Dutch artistic movement De Stijl, of which the Rietveld Schröder house is an embodiment.

World Heritage site in the Netherlands since 2009

The Wadden Sea is an intertidal zone (the area that is above water at low tide and underwater at high tide) in the North Sea. Why is a ‘seashore’ on this list? Well, it may be a relatively shallow body of water, with tidal flats and wetlands, but it is one of the largest unbroken systems of intertidal sand and mudflats in the world and is ridiculously biologically diverse. As well as all the plants and fishies, it’s home to the harbour seal, grey seal and harbour porpoise!

The Dutch part of the Wadden Sea (or the Waddenzee) belongs to the provinces of North-Holland, Friesland and Groningen. It has tidal channels, sandy shoals, sea-grass meadows, mussel beds, sandbars, mudflats, salt marshes, estuaries, beaches and dunes.

The Canals of Amsterdam

World Heritage site in the Netherlands since 2010

This refers to the historical Canal Ring built in the 17th century. The four main canals are Herengracht, Prinsengracht, Keizersgracht and the Singel; the surrounding areas form the Amsterdam Canal District (Grachtengordel). These canal belts eventually lead into the Amstel river.

“Venice of the North”

Why not experience this historic, cultural and romantic part of the city by booking a boat? From fancy culinary cruises to wading the waters DIY style with a paddleboard, there are plenty of ways to enjoy this World Heritage site.

World Heritage site in the Netherlands since 2014

Finally, the youngest World Heritage site in our list is the former Van Nelle Factory (Van Nellefabriek). Located on the Schie in Rotterdam, these buildings clearly bares a Russian Constructivist influence in its architecture.

“A poem in steel and glass”

Le Corbusier, one of the pioneers of modern architecture, said the building was the “the most beautiful spectacle of the modern age” in 1932. Before that, Howard Robertson declared it “a poem in steel and glass” in 1930. In 2015, the Van Nelle Factory topped the list of The 25 Most Beautiful Factories in the World.

Which one of the World Heritage Sites in the Netherlands is your favorite? Let us know in the comments below!

Editor’s Note: This article was originally published on 12 December 2018 but was updated for your reading pleasure on August 2020.

Previous articleDangerous pesticides found on fruit and veggies in Dutch supermarkets
Next articleDutchReview is looking for an editorial intern!

How many people does it take to steal an invaluable Van Gogh painting? Just one, apparently. A 58-year old suspect...
Read more