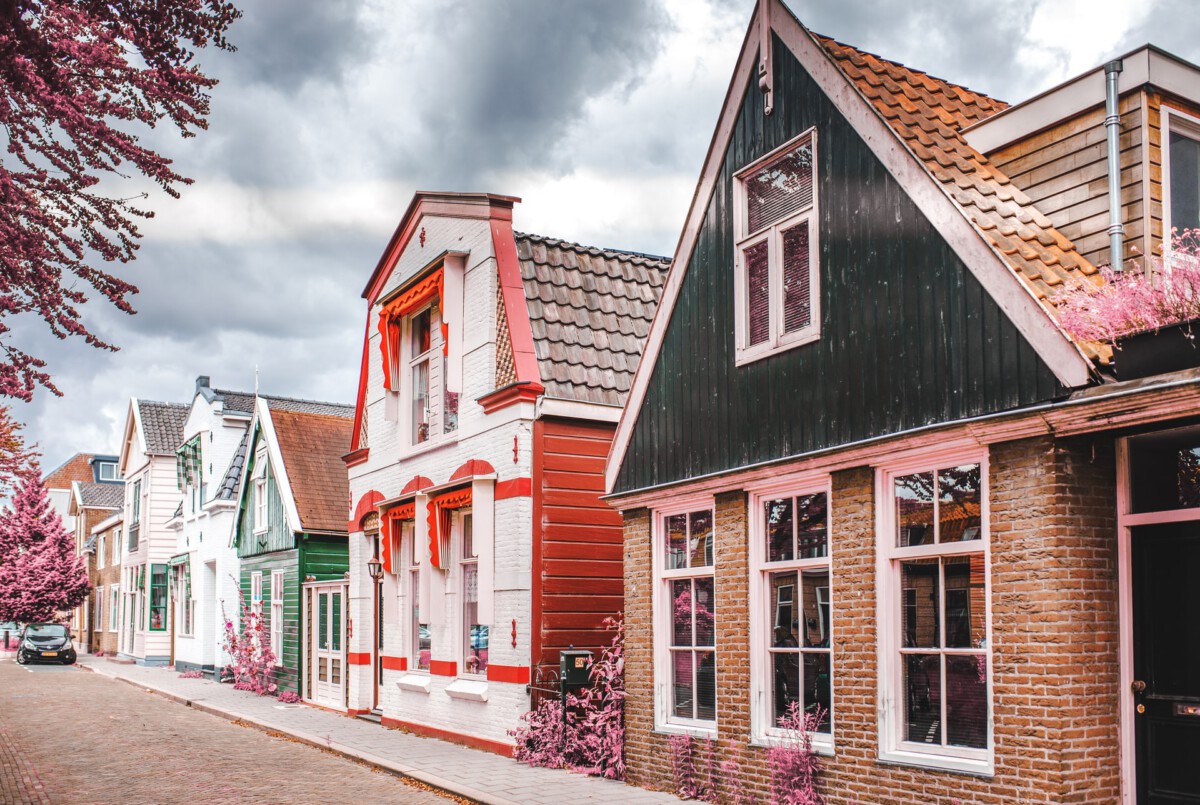 Looking for a cute Dutch village to visit for a day-trip? There are plenty of beautiful little spots worth visiting!

Dutch cities are beautiful, we all know that. But what about the villages? They deserve some love too. Besides, cities can be busy and overcrowded. We wanted to show that there are quiet, tranquil, quaint places in the Netherlands too. So, here is our guide to 10 authentic Dutch villages you simply have to visit.

Beesel is a village in Limburg, a province well in the south of the Netherlands. It was formed in 1275, so it’s been there for quite a while. It started off as a ship bench, and continued that way for over five hundred years, belonging to Spanish Opper-Gelre until 1713.

Nieuwenbroeck castle is one of its oldest preserved buildings, and the village has plenty of lovely neolithic architecture as well. Like all good villages, it has a wonderful, cozy atmosphere. It also has a meter high dragon adorning its roundabout, which refers to the village’s yearly tradition of staging a spectacle based on the legend of George and the Dragon.

Distance from Amsterdam to Beesel by public transport: 2.5 hours

De Rijp is in Alkmaar, in North Holland. If you’re excited about the Netherlands’ favourite food — herring — then this is the place to visit. Historically, it was surrounded by lakes (which have now been powdered), so herring fishing was an abundant source of revenue for the area.

As the potential birthplace of Holland, De Rijp has some of the oldest wooden houses in the Netherlands. It also has some rather hilarious stained glass windows in its church, which contain imagery not of God, but the next best thing: herring. Speaking of the seaside, while you’re in Noord-Holland, don’t miss its beautiful beaches!

Distance from Amsterdam to De Rijp by public transport: 1 hour

Naarden is a village that really needs to be appreciated by air — look at that awesome town layout! The unusual outline of this village is the result of it being a star fort. Its distinctive shape was also important in more modern times. In World War II, Allied bombers would cheer when they passed overhead, knowing they were on their way back to safe territory. Apart from that, Naarden is home to the Dutch Fortress Museum.

Distance from Amsterdam to Naarden by public transport: 40 minutes

This village is a UNESCO World Heritage site, so you know it’s going to be good. Kinderdijk is home to the largest collection of old windmills — 19 in total! If you’ve been craving some of those mandatory Dutch windmill pictures for your Instagram, this village is not something you can miss. You can buy tickets for a tour of two windmills that have been turned into museums if you fancy getting deep into the history of this beautiful place, or you can just admire these awesome structures from afar.

Distance from Amsterdam to Kinderdijk by public transport: 2 hours

This Dutch village is perfect for visiting in the summer months, as it’s most famous for the lakes that surround it, the Loosdrechtse Plassen. It’s actually really two separate villages, Old Loosdrecht and New Loosdrecht. Old Loosdrecht is mainly made up of beautiful lakeside villas — the area is a favourite haunt of the wealthy. New Loosdrecht, on the other hand, is quite densely populated and a bit less exclusive. But as a tourist, both sides of the village are worth exploring. You can enjoy the lakes by boat or from the shore while you’re there.

Distance from Amsterdam to Loosdrecht by public transport: 1 hour

If you’re visiting Utrecht, you might as well pop by to Vinkeveen — another fabulous village that’s super beautiful from above as well as in its pretty streets. Vinkeveen is famous for its lakes, which you can see in the picture below. They’re used for swimming, diving and yachting, on the approximately three days of the year when the Dutch weather is good.

Distance from Amsterdam to Vinkeveen by public transport: 45 minutes

You can pretend all you want, we all know you moved to the Netherlands for the tulips. Lisse is near Keukenhof, the *cough* somewhat expensive *cough* park where you can see more tulips than you’ll ever need. If you visit Lisse, not only can you see the beauty of seemingly endless fields of flowers, you can also visit a very cute village! And you can feel all smug about avoiding a tourist trap, as well.

Distance from Amsterdam to Lisse by public transport: 45 minutes

8The Dutchest name for a Dutch village: Broek in Waterland

In my opinion, Broek in Waterland is probably the most spectacular of Dutch villages, and it’s super close to Amsterdam! This does mean it gets a bit overrun with tourists (like Amsterdam itself), who all understandably want to experience rural Dutchness without travelling too far outside the city. It has actually been a tourist hot-spot for generations, acting as a vacation town in the 17th and 18th centuries. The village has monument status, so it has been well preserved, and some of the houses are pastel coloured or white, so it’s very aesthetically pleasing.

Distance from Amsterdam to Broek by public transport: 30 minutes

Now, Bronkhorst is quite a trek from Amsterdam, but luckily, the public transport system in the Netherlands is really good. And besides, this town — or actually city — is well worth it. Although Bronkhorst has only 157 inhabitants, it was granted city rights in 1482. That means it technically has limited self-governance. It is an absolutely gorgeous village to walk around: quiet streets, cute Dutch architecture, and plenty of greenery. There are also some really nice bike routes in the surrounds of the village.

Distance from Amsterdam to Bronkhorst by public transport: 3 hours

10Dutch village you must visit: Thorn

Thorn is in Limburg, and has a really cool combination of great architecture and fascinating history. It is known as the white village, for obvious reasons: all of its typical Dutch brick houses have been whitewashed, which gives it a lovely clean, summery vibe.

Thorn began as a swamp near the Roman road between Maastricht and Nijmegen. Then, in the tenth century, the swamp was drained and a monastery was set up in Thorn. In the thirteenth century, this monastery became a convent. These nuns made wine, which is still made and served in the village, though the convent itself closed in the eighteenth century. There are also two mummies in the Abdijkkerk, whose identity is still unknown, though they date from the fourteenth century.

Distance from Amsterdam to Thorn by public transport: 2.5 hours

Will you be visiting one of these gorgeous Dutch villages soon? Or have you already been to any? Let us know your thoughts in the comments below.

Feature Image: redcharlie/Unsplash
Editor’s Note: This article was originally published in October 2019, and was fully updated in September 2020 for your reading pleasure.

Halloween in the Netherlands: the ultimate [and spookiest] guide for 2020