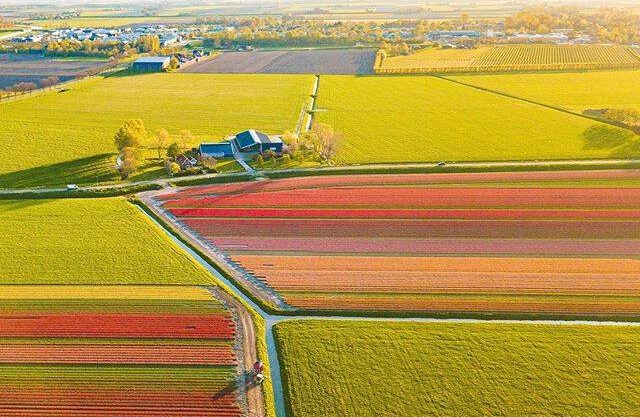 If you’ve ever found yourself looking to the Dutch horizon wondering how on earth the Netherlands is so flat, you’re not alone.

When I take a train from Belgium or Germany back into the Netherlands, I know I’m over the border when suddenly the horizon begins to stretch for hundreds of kilometres in front of me, completely undisturbed by hills or mountains.

Coming from a mountainous country, the very sight of it makes the cogs in my brain twitch — how is the Netherlands so flat!? So, after puzzling for days, I went and found out.

How did the Netherlands become so flat?

It turns out a combination of geography and land reclamation from the sea is the source of the ruler-straight horizon. Let’s take a look at how each of these work.

Most of the Netherlands consists of naturally flat plains of low-lying land — hence ‘Nether’lands. This is to do with it being the drainage point of western Europe. Four major rivers (the Rhine, the Meuse, the Scheldt and the Eems) flow into the Netherlands and drain into the Wadden and North Seas via the Dutch coastline.

How the Dutch reclaimed land from the sea

A whopping 17% of land in the Netherlands used to be under the sea with the fish! Stealing this land back to build entire cities is one of the many reasons the Dutch are renowned for their engineering skills when it comes to water. It’s also why much of Holland is so flat.

How exactly the Dutch achieved this is truly impressive. First, dikes, which are long walls or embankments used to stop large masses of water, were built around areas of the sea to section off where the new land would be. These areas were called polders. The seawater was then pumped out of the polders using windmills, and plants were used to stabilize the ground. Polder ground is rich in clay, fertile, and yes, very flat.

The following video has some great animations to show you this process:

Is the Netherlands below sea level?

You’ll wet your pants if you think about this too much but yes, 27% of the country lies below sea level (meaning about 10% of the Netherlands was already below sea level before land reclamation). A crazy 21% of the 17-million Netherlanders reside quite blissfully in what used to be water. This includes major cities like Amsterdam, Rotterdam, and Delft. The lowest point is 6.7 metres below sea level!

The Dutch dike system protects the Netherlands from flooding and disaster. The Delta Works in the southwest of the country are one of the largest systems of dikes, locks, and storm barriers built to protect the Netherlands.

The three border region of Vaals, where the Netherlands meets Germany and Belgium, is the highest point of the country — but it’s still only 323 metres high. That doesn’t stand up to places like the Swiss Alps which are up to 4,634 metres above sea level!

Is the Netherlands sinking?

You may have heard that much of the Netherlands is built on sinking ground, and unfortunately, this is true. The continuous drainage that is required to keep parts of the country dry, now done by pumping stations rather than windmills, is causing the land to sink up to seven millimetres per year.

This can cause huge problems for Dutch infrastructure, like cracking foundations, destabilized roads, sinkholes and an increased risk of flooding. Already, a few old canals and quays in Amsterdam have collapsed. Many Dutch cities are reinforced with underground poles by law to try and fight this. The older houses were built on wooden piling which rotted, often costing millions of euros to replace.

A report by the PBL Netherlands Environmental Assessment Agency predicts around €5.2 billion will be needed to restore weak foundations by 2050. Ouch!

How is the Netherlands preparing for rising sea levels?

Unlike some politicians with *cough* bleached cats for toupees *cough*, the Dutch government does not ignore climate change, nor do they plan on building any walls.

“We can’t just keep building higher levees, because we will end up living behind 10-metre walls,” senior government advisor Harold van Waveren told the New York Times. Instead, the Dutch are building inland reservoirs to catch floodwaters in a project called Room for the Water. In this way, the Dutch hope to continue to do what they have always done best — that is, to live with water rather than fight against it.

But the Room for the Water project has received some scepticism too. The area of Noordwaard, once a thriving farm region in the southwest of the Netherlands, is now only a watery marshland after it was designated as a flood-catchment zone for the project. Homes were demolished and people displaced, and some fear that with rising sea levels, this will be the fate of many Dutch areas in the future. Concerns have arisen over how sustainable the Room for the Water strategy really is.

So now you know: the Netherlands is flat because of both natural geography and land reclamation. Considering how much of the country is on polder land, the nation sure is pumping a lot of money, brainpower and water into keeping its cities dry.

Are you impressed by amazing Dutch innovation? Is the Netherlands doing enough to save itself from climate change? Share your thoughts in the comments below.