Dutch swear words: the guide to insults and cursing in the Netherlands

I still remember the first time I biked past a red light in The Netherlands. It was my first week in the ‘Orange Country’ and I knew little of biking etiquette. After almost crashing into a bakfiets full of 2-year-olds, I had my first experience with Dutch swear words. The woman riding the bakfiets yelled out ‘Lul!‘ as we just barely missed each other.

That was years before I knew how to speak Dutch, so I was a bit confused because I thought she yelled out ‘LOL!’. Little did I know that she was in fact not ‘laughing out loud’; she called me a ‘penis‘ for almost killing her children. Fair enough.

‘Lul‘ is one of the many creative ways to curse at someone in Dutch. In a language where normal words like Scheveningen already sound like unforgivable curses from Harry Potter, it’s good to at least recognize some of the basic ones.

So whether you want to yell at a misbehaving Brit in Amsterdam, or you want to deepen your Dutch-learning experience, here we’ll show some of the best Dutch swear words. DutchReview, of course, does not condone the use of any of the following Dutch curse words, profanity or phrases. We’re just trying cover as many aspects of Dutch culture for you, our international reader fan-base. Having said that, let’s begin kut! And just like eating only one stroopwafel from the package (instead of all of them at the same time like a giant sandwich), it would be a crime not to start with the infamous ‘disease-based curses’.

Before we get going, we’d really like to thank Bart de Pau from Learn Dutch for working together with us on all these beautiful ugly words of Dutch. Check out Learn Dutch (and their supreme Youtube channel) if you’re serious about learning Dutch!

Have you ever been so angry at someone that you verbally express your desire for them getting cholera? No? How about typhoid fever? Still no? That’s weird… It’s weird at least for some Dutchies, because Dutch swearing involves diseases sometimes.

That’s right, it is a well-known fact that wishing an illness upon your enemies is a common way to curse in Dutch. Why? Well, that’s a great question. A quick Google search revealed that ‘high-levels of individualism and low levels of masculinity’ (see Hofstede’s dimensions of culture), may explain why Dutchies are so keen to wish typhoid fever or tuberculosis upon people when they swear. Not always, of course.

Swearing with diseases sounds pretty bad. Well, that’s just because it actually is pretty bad. I think it’s needless to say that the following type of Dutch swear words and phrases are very much frowned upon by Dutch society. In fact, you should only use these if you’re alone in your room and there’s no around you in a radius of 50km.

The only other situation where you should use one of these is never. Alas, we’re trying to expand your knowledge on all things Dutch, so here’s a list of Dutch curse words/phrases that involve crippling, life-threatening diseases:

When are these appropriate to use: You stub your little toe on the corner of a desk at 7am, and you are somehow alone on an uninhabited island. Someone casually mentions that Jar-Jar Binks and the Ewoks are an adequate addition to the Star Wars saga.

*Serious disclaimer: we know we’re having a laugh here, but especially using cancer/kanker in your Dutch swearing is more than frowned upon. Big no-no there. Find other no-nos here.

Thankfully, there are other ways to swear in Dutch that don’t involve diseases. ‘Friendlier’ Dutch swear words exist and can be used to express anger without making life-long enemies.

Everyday swear words in the Netherlands

In a country where you can literally bike next to tulip fields, it’s hard to think of situations where you would want to curse. Of course, things like the weather or other inconveniences of life might incite you to curse under your breath. Without the need for slurring out diseases, there are words/phrases you can say to express your discontent.

When are these appropriate to use: Someone eats the last bitterbal at the borrel and/or double dips said bitterbal in the mustard cup. Someone does not signal a turn when riding a bicycle. 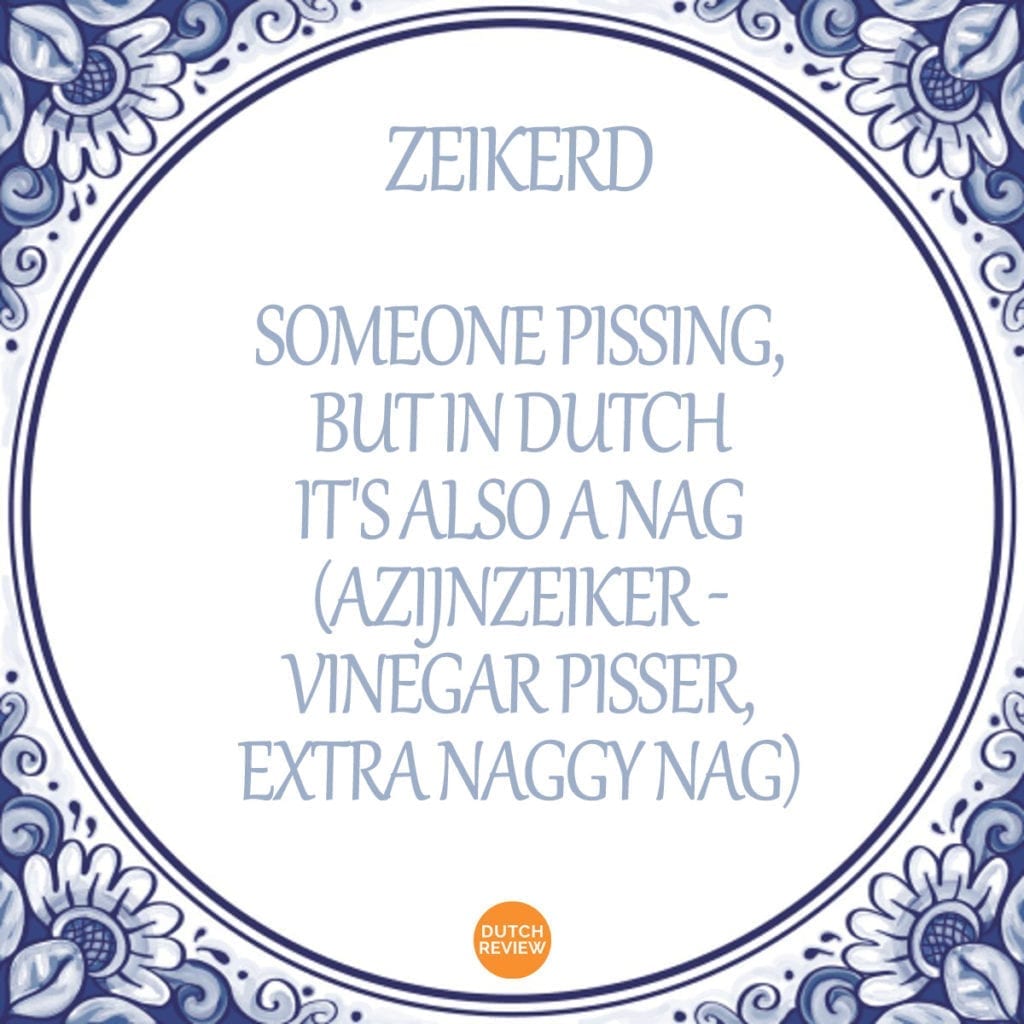 Female and manly insults in the Netherlands

You just don’t insult a Dutch person without using the appropriate form of gender, that would be rude. So let’s get you up to speed with some of the most heard curses to sling at Dutch men: 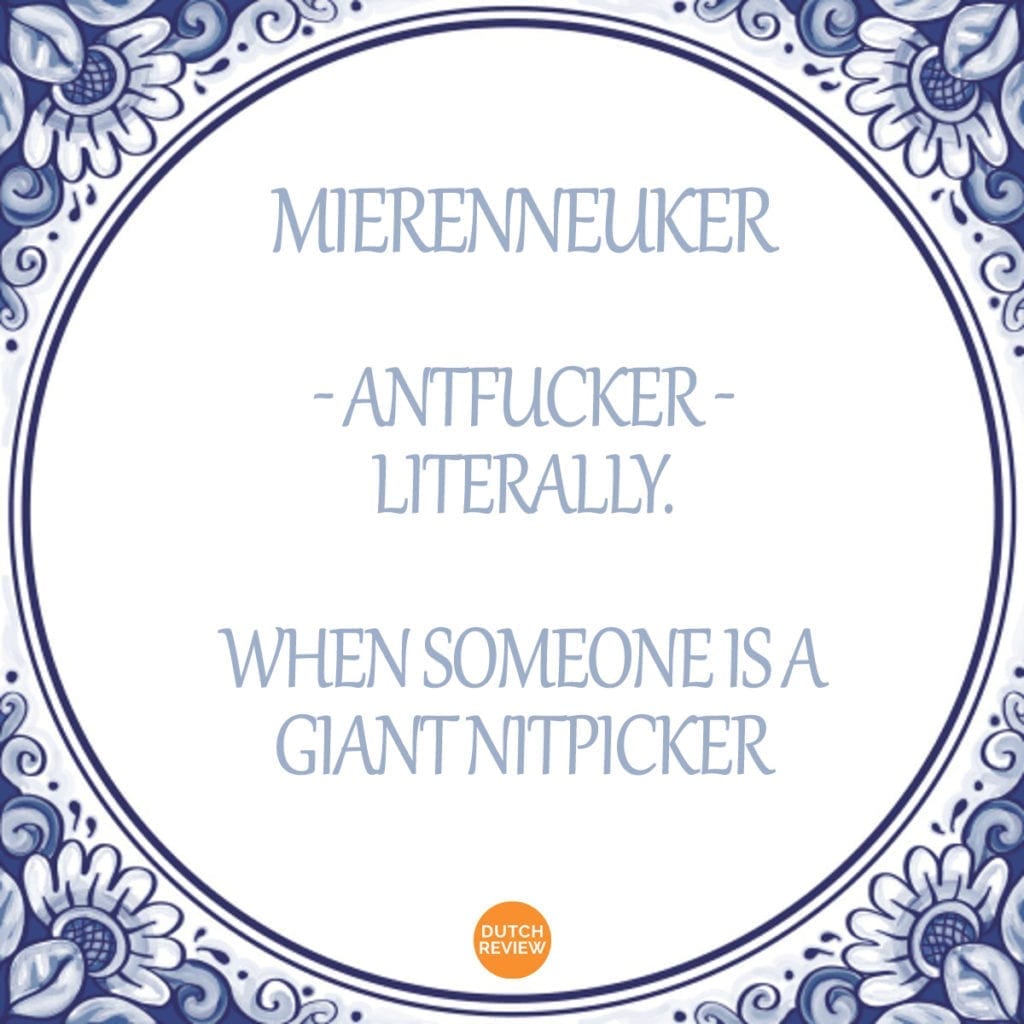 And now the ladies (sorry mum):

Special attention goes to the word ‘hoer‘ (whore), which you can modify with all kinds of other words in front of it — like moffenhoer (German-loving whore).

When are these appropriate to use: when someone steals the last seat on a train from a pregnant lady or when your Dutch partner cheats on you.

Racist swear words in the Netherlands

Jeeh, this is not a happy-go-lucky article. Despite the progressive outward-image of the Netherlands, racism runs deep, and there are plenty of ethnic slurs in the Dutch language to prove it. However, we don’t think that publicising these is going to benefit the world in any way — if you really want to know Dutch racial slurs (why?) we’ll let you Google that yourself. 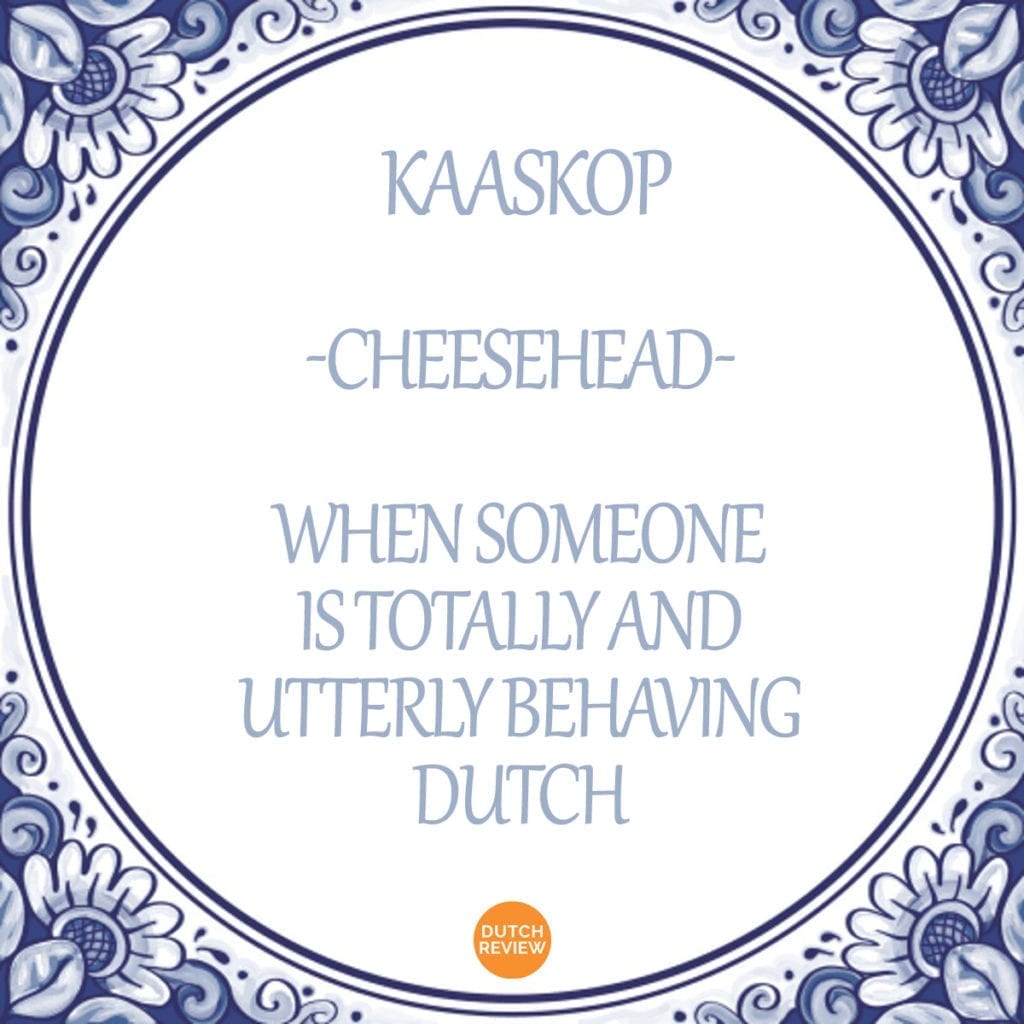 Obviously we all need to vent a bit every now and then, even when you’re among your Dutch inlaws. Just imagine someone using the knife on the cheese instead of the ‘kaasschaaf‘ without cursing something decent. So here are a couple of Dutch swear words that are almost totally fine to utter every now and then:

And we haven’t even talked about besodemieteren (scamming it) and oppleuren (go away!). 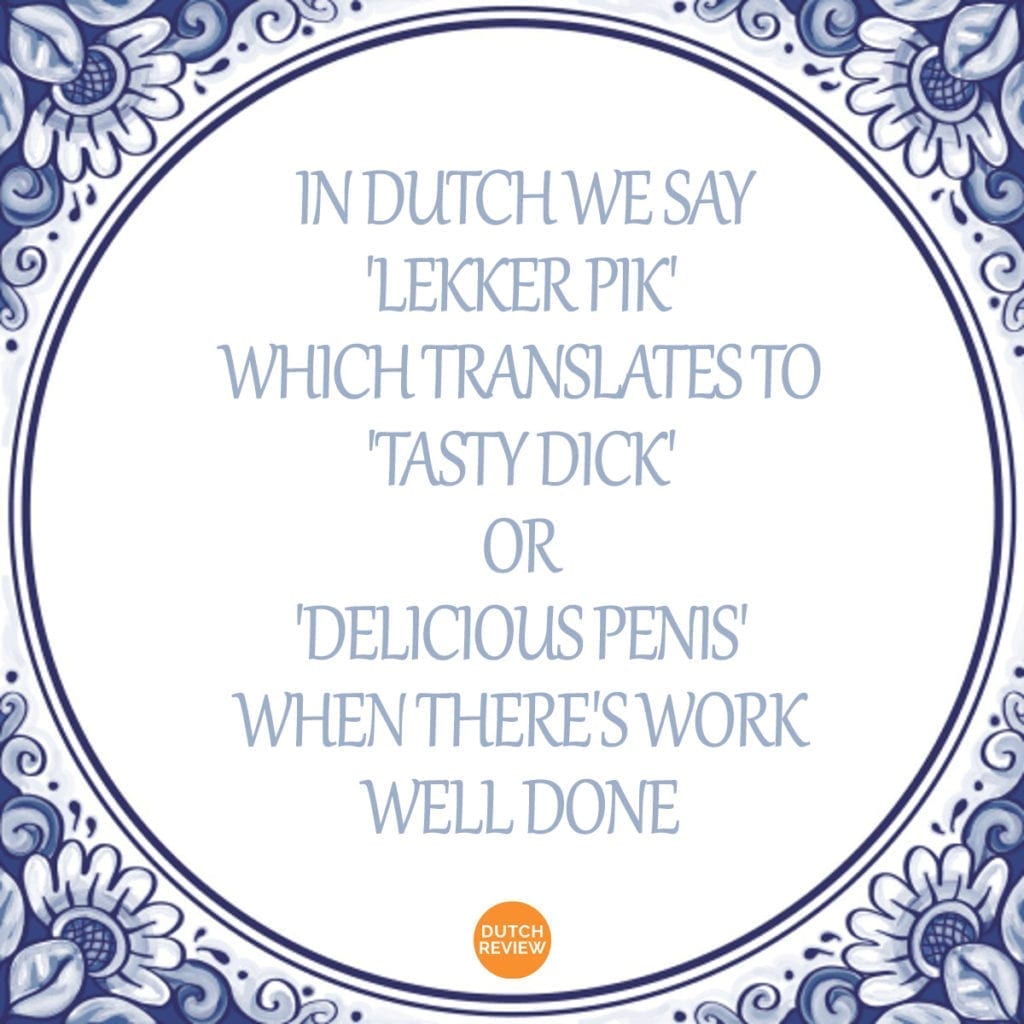 Obviously, the Dutch being great English speakers, they have adopted their fair share of English profanity into the Dutch language: bitch, fuck and shit have really made it here. Luckily some other swears haven’t, and most Dutchies know better than to use the N- and C- words.

Thanks to Narcos the Dutch have also a soft spot for hijo de puta and the German SCHEISSE. However other ones like ‘putain‘ and mierda/merde have never made big inroads here.

Profanity in the Netherlands

Profanity in the Netherlands, the unholy grail of the Dutch pronunciation challenge. Let’s skip right to the famous goddamnit of the Netherlands: godverdomme.

The thing you have to know about godverdomme is that you can also just repeat it in the same word when you feel like uttering profanities. Then it will be godverdegodverdomme.

That all when it comes to profanity in the Netherlands? Well, there’s Jezus who gets the same treatment as ‘Jesus’ in the English language, but that’s about it.*

Obviously, our foul souls and profane puns can only teach you so much Dutch. If you really want to make an effort of learning Dutch we can highly recommend Bart de Pau and his excellent ‘Learn Dutch‘ website. He’s the one we called to explain all the tiny but important nuances of swearing like a Dutch sailor to us (sorry for cursing so much on the phone Bart!)

Bart and Learn Dutch have an excellent summer school in Amsterdam where they’ll actually teach you useable Dutch instead of a string of Dutch swear words:

If you can’t make it to his summer schools then there’s a better-than-good Youtube channel to subscribe too as well, with over 77,000 people hitting subscribe before you it’s probably the smart, and easiest way to start learning Dutch.

And heck, otherwise you can at least enjoy his nice videos on the experience of learning Dutch.

Feature Image: Ryan McGuire/Gratisography
Editor’s Note: This article was originally published in July 2018, and was fully updated in August 2020 for your reading pleasure.

Previous articleMeet Sam: the stray who walked from Switzerland to the Netherlands
Next articlePolice and demonstrators clash in The Hague after corona protest 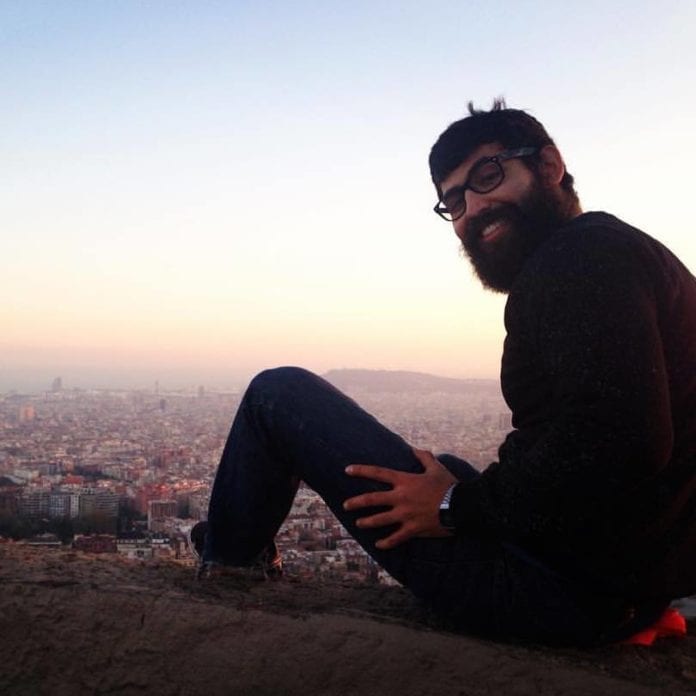 There are a few things the Netherlands will never have. Decent curtains, dinner after 6 PM, and mountains.  But one can...
Culture

Oh, The Simpsons 🎶. The animated sitcom with its quirky yellow characters has been running since 1989 and is still...
Culture