‘Like an eagle, arise, Wake Up Your Dreams and fly’….and that is exactly what The New

has done these past few years, but especially since the CD-Release Party at Rotown, Rotterdam (October 17, 2013). The latest album from The New Shining, Wake Up Your Dreams, has certainly taken flight, and mark my words, it won’t be long before this eagle is granted world-wide nesting rights. Within one short week TNS stormed the Dutch music scene, reaching #25 on ‘National Top 100 Albums’!

In addition to topping the national album charts, ‘Wake Up Your Dreams’ broke records, as it went directly to album of the week on Radio 1 & 2. Also, a free CD was raffled off daily on Radio 2 to enthusiastic listeners of, De Gouden Uren, with host, Daniël Dekker.  It is only logical that the trend will continue and before long TNS will be number one on the international charts. Just two weeks after the release party, it was announced that Wake Up Your Dreams placed #4

Not that any of this fast and furious fame was surprising!
Having had the pleasure of attending the Rotown event on October 17, 2013 and experiencing the sensation that swept over the crowd, it was safe to assume the rest the country would soon get caught up in the magic that is The New Shining. Singing along with the other fans who packed the sold-out venue, and feeling the energy that emerged from the stage, made for a perfect night. During the party, the crowd was treated to many songs from the new CD, in addition to the title track, Wake Up Your Dreams, set-list included: Is This How It Ends, Run Baby Run and Devil On My Tail. 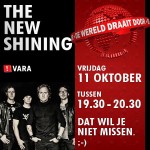 Perhaps you are familiar with, Devil On My Tail, from the October 11, 2013 appearance of The New Shining on Dutch television program De Wereld Draait Door.  Although the Release Party event showcased the new album, the performance of last year’s number one radio hit, Can’t Make Up My Mind, from Stripped/ Full Circle (2012) was a special treat. Front-man ‘Nax’ encouraged everyone to sing, and you could see genuine gratitude shining in the eyes of the band members, when their fans joined in on the refrain. With the playful camaraderie between Xander “Nax” Stok (songwriter/vocals/guitar), Arjan “R” Nijman (bass guitar/backing vocals), Roel van der Sluis, (drums), Evert Zeevalkink (guitar), some of the numbers lasted a full six minutes. After a welcomed encore that ended with, We Are The Ones, (a song that could be described as a ’kicking number’ with the flavor of American band, Calexico), the band took a much deserved breather backstage before joining crowd for fan photos.

The Rotown audience was as diverse as the music, which transitioned smoothly from the undeniable American sounds of Hard Rock, Southern-rock, Country, Classic-Rock, Folk-Rock, and Modern Progressive-Rock. A fourteen year old girl accompanied by her mother, who had won tickets to the event, appeared to be the youngest fan; die-hard rockers, on the back side of sixty, obviously enjoyed the sing-a-long; and the remainder of the crowd presented a balance between the twenty’s, thirty’s, forty’s, and fifty+ age group. In other words, TNS music offers something for everyone!

Although a comparison to Calexico was mentioned above, it is difficult to place The New Shining into a musical category box, and to be perfectly honest, it would be a shame to do so. However, there are some people who need reference points before they can purchase music, or even give music a try, so here is my attempt to categorize the tantalizing delights that await you on ‘Wake Up Your Dreams’.  This album could easily find a place in your collection next to the following artists:  Calexico, Nickelback, The Killers, Eagles, Mumford & Sons,  Tal Bachman, Bon Jovi, Passenger, Eric Clapton, James Taylor, Johnny Cash…well, the list could go on and on. The point is, their music transcends classification and branding; it is unique, pure and most importantly, it remains ‘real’, as do the gentlemen known as, The New Shining.

Congratulations to The New Shining!  You have earned every moment of this attention, keep flying!

‘Wake Up Your Dreams’ is now available at the following outlets: VelvetMusic or  Bol.com.

You can also download the album via iTunes and Spotify.

* The following chart of ‘Headlines & Quotes’ has been translated from The New Shining Newsletter.