The Dutch vs Trump: Two tips from the Dutch to fight Trump

In a shocking upset it turns out you and our (almost-) neighbours the Brits have a few more things in common besides language and a fondness for spying on your allies. And yes, of course, we are as surprised and shocked as many of you are. Our media too is wallowing in a deep pit of self-pity over their failure to even consider the possibility of it happening. Quite a few of us feel as worried as you do right now. After all we largely live below sea level, and it is now official policy that “the concept of global warming was created by and for the Chinese in order to make U.S. manufacturing non-competitive”. 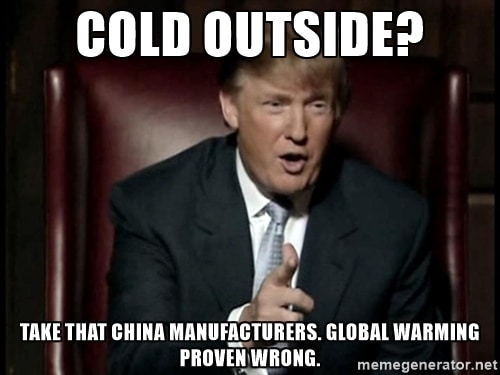 But we Dutch are rather ingenious at times. So in the spirit of kinship, and to save our own ass, allow me to share a few lessons from our history that may help you in your predicament.

Dutch vs Trump: Transform the landscape

So it’s the 1950’s and 60’s. After our people survived the years of the second World War they were looking for a real challenge. They looked around them and saw quite a bit of water, right in the center of their country. It had been there for ages and driving around it had been a real bitch. So the Dutch applied sheer force of will and built an island there. And you know what we do now? We complain about how it’s still a bit shit.

And that my American brothers and sisters is what you can do. How you might ask? Currently you can go to https://apply.ptt.gov/ and apply for a job in the Trump administration. They don’t even kick you off the site if you’re a foreigner!

And yes, I know what you’re thinking. “Random Dutch guy that is a fucking terrible idea. I don’t want to work for Donald “I’ll fuck up Joe Biden’’ Trump. I’ve seen the Apprentice.’’. And I get that, I do. But think about it; you will get a front row seat to a Trump White House. The possibilities are endless! Wanna be a whistleblower? Work your way up, you could very well end up impeaching a President.

If you’re feeling particularly unpatriotic and rebellious at the prospect of your new overlord, why not apply with a group of friends to the same department and slow that shit down to a standstill? Jesus just imagine how much you’ll fuck up that narcissists day if you spell his name wrong. And he’s not going to fire you the first time, that’s bad press. Probably not even the second time. Who knows you could be doing it for an entire week! And you get money and experience in return. Finally you could maybe even do some good. Who knows? But be prepared. If you do this, best case scenario you look back on your work and realise; it’s still a bit shit.

Also don’t forget your competition for the job is the soulless and deplorables. I’m sure any tie will do fine.

Dutch vs Trump: The Raid on the Medway

In the year 1560 the Dutch were waging a heroic war against the English. Yes my American friends, some people did it before you, contain your shock. During this war there was a sea battle waged by Admiral Michiel de Ruyter that rivals the stand at Thermopylae (but more ‘suriviving’ and actually winning). While peace talks were underway the Dutch felt a need to avenge an earlier loss. So they sailed towards the river Thames. A fort could not stop them. They sailed right over a massive English chain that was erected to stop their approach and smashed it to pieces. They sank ships left and right, then left again for giggles. As they approached London the aristocracy fled the city. The fleet that remained tried to fight back, and one small rowboat, under massive English fire, sailed straight into the docks and managed to destroy three line ships.

The Dutch smiled and went home, knowing that the debt was payed. The lesson here? Be bold. After that terrible decisions our twatty neighbours newspapers reported ‘massive Brexit regret‘, and google searches for ‘’What is the EU?’’ went through the roof. I’m sure some of you have googled Trump by now.

Do any of you have buyer’s remorse? Well let me inform you all of a way out. You see you lot have one tiny rowboat. It is called the electoral college. Yes yes, I know, it is an incredibly long shot. It’s nigh impossible. But do you really think there is no likelihood of another scandal hitting the Donald in the coming weeks? Hell do you seriously expect this to be a smooth transition? The electoral college consists of people. People who are legally allowed to change their mind. Pray for another scandal to whatever Deity you believe in and when it hits, lobby those people. Let them know there is massive support for them if they do decide to not cast their vote for Trump. It could stop a Trump presidency and irreparably damage the frankly dumb electoral college simultaneously. Your tiny rowboat has that little bit of Dutch potential! Sure some of the electoral college members will likely be killed. But they will have saved the Dutch from drowning. Movies will be written about them and they will be legends for all eternity. And let’s be honest, isn’t that the American Dream?

Previous articleThe Trump Election: Looking Beyond Populism
Next articleRunning out of potatoes is not a-peeling!