Reviewing ‘The Theory of Everything’ by Ayreon 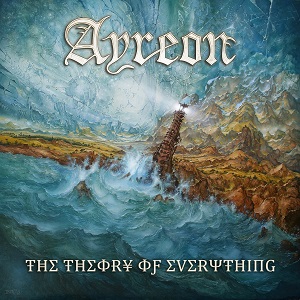 After a long, far too long wait, a new double album from the phenomenon that is Ayreon has been released. The Theory of Everything, the latest epic rock opera from the Dutch-born musical millipede Arjen Anthony Lucassen has finally seen the light of day. I was very enthusiastic about this album, and so were you, because we at DutchReview noticed how this article from April this year kept receiving hits from people who searched Google for the album title.

I’ll give you my personal take on the album before I delve into the material: the new Ayreon is in many ways just what you’d expect, meaning that it is slightly anti-climatic in some ways, but very satisfying in many others. More on that later, but first, I want to tell you a little about what this album is all about.

The albums of Ayreon have always reminded me of the novels by Chuck Palahniuk (if that name means nothing to you, he wrote the Fight Club novel). All of Ayreon’s albums are like operas which tell of the emotional turmoils of an individual. Certain themes keep coming back, such as parental neglect, loneliness, yearning for love, and the search for meaning in an apparently uncaring Universe. But above anything else, it’s always about people who are trying to reach out to others but don’t know how, often because they do not yet understand themselves or what really motivates them. Slavoj Žižek recently said it best: “We often do not want what we think we want.” Trying to be a better person is a hard struggle when you’re crushed under the weight of nihilism. While there are many, many great novels and movies that deal with this issue, there is no one in music who handles this as well as Ayreon.

You’re right, it’s strange / It all seems different now
The mist has cleared / I’m finally awake
But it’s hard to change / I want to live but I don’t know how
I need someone / To help me find my way

The Theory of Everything is centered around the main character, simply named ‘Prodigy’ for being a young and brilliant mathematician. While he tries to solve the equation for the titular Theory of Everything, he simultaneously tries to understand the forces that push and pull him towards and from the people in his life: Mother, Father, Girl, Rival, Teacher, and Psychiatrist.

His talent proves to be both a blessing and a curse. It soon becomes apparent that this Theory of All isn’t just about physics, but also about what defines us as a human being.

Patterns emerge in nature’s dance
Numbers are born in the wheel of chance
Why do I see this?
What does it mean to me?

What I like about this quote is that Ayreon does not have the protagonist say “What does it mean?”, but instead “What does it mean to me?” This way, the “what” turns into a “why”, and here the musical odyssey for self-understanding begins. The “Why” questions are everywhere in his albums, it is no coincidence that his latest one was entitled 01011001, which when decoded in ASCII, yields the letter Y.

Like its predecessor 01011001, The Theory of Everything has a more darker story to tell. I can’t say too much about this, because I don’t want to spoil the story for you, but Ayreon’s latest release is the most fatalistic and bleak of them all. Yes, *SPOILERS* for a music album, you don’t hear that every day. But it will suffice here to say that The Theory of Everything is a modern take on the Faustian story of a man possessed by his intellectual quest: one that will cause him to makes sacrifices that he will later regret (also known as the Deal With the Devil trope).

Before this review is over, I have a three minor gripes that I want to discuss. First off, the singers on this album, while they all did an absolutely amazing job, sound a bit too similar for my taste. What I loved about The Human Equation is how distinct and how fitting every singer was in his or her role as one of the conflicting emotions of the main character. Second, there is what you’d call technobabble in some of the lyrics. At one point, these lyrics degenerate into simply listing ‘sciency’ phrases with no profound connection to each other. I realize that no one was expecting Ayreon to actually solve any physics while making this album, but I think he handled this subject a lot better in the lyrics on 01011001. Third and final, the album does not have such a climatic conclusion as the previous albums had. The finale to 01011001 still manages to bring a tear to my eye, as all the singers of the album make their reprise for one last overwhelming musical masterpiece that speaks of the last seed of hope that narrowly escapes the complete destruction of the world.

But the latter complaint is perhaps more a matter of preference. When it comes to Ayreon fans (or ‘Ayreonauts’), there is always a question where you stand on the scale going from symphonic to heavy metal: do you prefer the ambiance, or do you prefer hard rock? This last album clearly favors the symphonophiles (that’s a word now, by the way). Musically, The Theory of Everything stands out from its predecessors in that it is far more symphonic; the album basically consists of four long tracks (over twenty minutes in length) where different motives and melodies fade into each other. Much like the nebulous quantum foam, notes and harmonies seem to come into existence just as easily as they disappear again. You might call this the most ‘fluid’ of all of Ayreon’s major compositions, as the previous ones had a lot more rigid and rough heavy metal arrangements. Still, the hard rockers will definitely get a kick out of this album.

For my final judgment, I will not give this album a score. As fitting as it would be to judge the The Theory of Everything with an equation, I’d rather neglect putting a number on it. So let me conclude by saying that if you loved Ayreon’s previous albums, you will not be disappointed, and yes, it has absolutely been worth the wait. Fans of prog rock are without excuse for not giving this at least a try.

Arjen, we at DutchReview salute you! Thank you so much for this wonderful composition and we can’t wait to hear more from you.

Previous article
Daily Dutch News 01/11/2013: Of Cyber-Totalitarianism and Exploding Duckies
Next article
Moving to the Dutch Countryside aka Middle of Nowhere