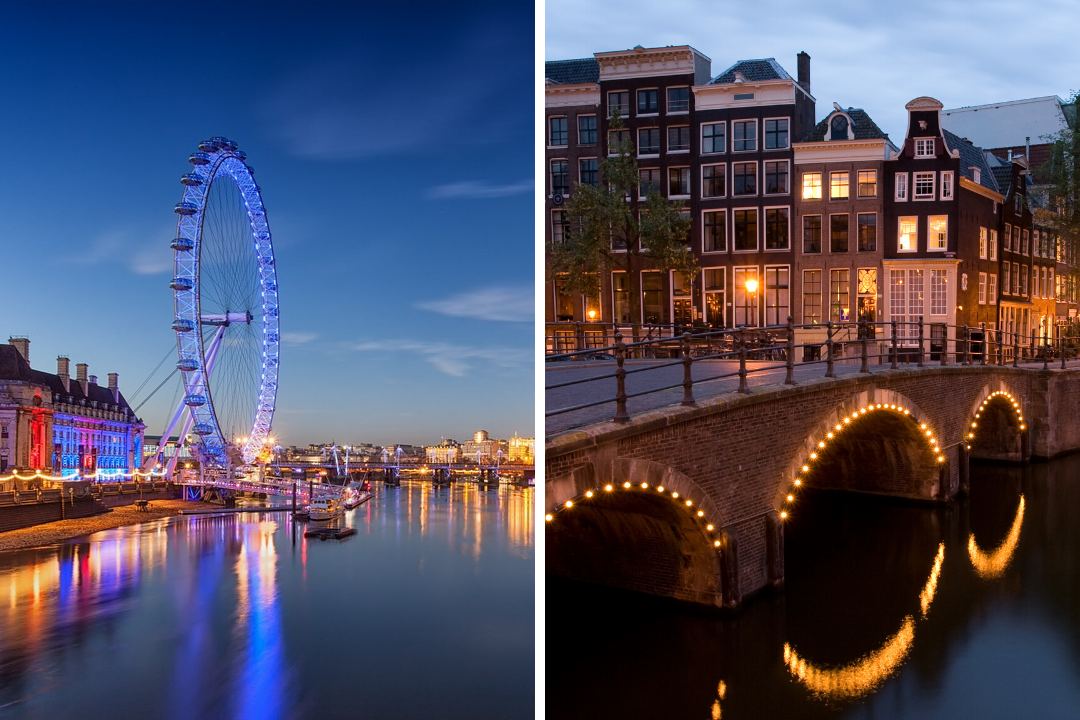 Two renowned but completely different cities separated by the North Sea. You’ve heard rave reviews about both but you’re unsure which one to move to? Are you considering a university exchange and are tempted by both metropolises? Or perhaps you are taking a sabbatical and want to make the right choice for this once in a lifetime opportunity.

We are multi-cultural here at DutchReview and many of our staff have lived in both cities. We’ve covered all bases and present to you the ultimate comparison between Amsterdam and London.

Disclaimer: Please bear in mind that we are comparing averages. There will, of course, be discrepancies based on personal preferences.

The stunning Rijksmuseum at dusk is well worth a visit. Source: Nikolai Karaneschev/Wikipedia

It’s a little unfair to compare the culture in these two cities given the drastic size difference. London has almost nine times more people and is seven times bigger than Amsterdam, so it’s only natural it has more entertainment. So for this question, we have to assess it relatively.

English writer Samuel Johnson famously said, “if you’re tired of London, you’re tired of life”. There is so much happening in London that it is hard to believe people ever get bored.

But where does it differ? Well, in the price. All the major museums in London are free. Yes, completely FREE. Hear that frugal Dutchies? By comparison, the Rijksmuseum costs 19 euros per adult.

On average, visiting the cinema in Amsterdam is cheaper. You can get a ticket for around 11 euros in comparison to the 16 pounds you would pay in London.

There is far more variety in London and all major shows will always visit London. Both cities have systems to get massive discounts. In London, head to the TKTS booth in Leicester Square, where discount tickets for a huge selection of London show’s are put up for sale every morning.

In Amsterdam, there are some shows but no where near the amount in London and you have to check in advance what shows are performed in English and not Dutch. Last minute ticket shop has daily deals and huge reductions, so visit that site to snag a bargain!

London has far more variety, probably due to the sheer size of it. You are bound to find something that suits everyones tastes – electronic music, 80s themed nights, techno and blues parties.

There are plentiful of decent clubs in Amsterdam and thousands of people travel to Amsterdam just for the nightlife alone which is renowned for being an intense clubbing experience to electronic music.

Amsterdam’s small size works in its favour here as it is relatively easy to visit a few different clubs in one night. Most of the time you could even walk between a few decent clubs with ease. London on the other hand, requires a taxi which makes going out more expensive, unless you hit the jackpot and visit a great club the first time around.

The club scene is awash with cocaine and ecstasy users in both cities. If you are going to try drugs in the Netherlands, make sure you are aware about the different types and the varying effects they have.

Like to keep fit? Gym memberships are on average about 50% cheaper in Amsterdam than London. But London has great deals with “no frills” gyms such as Simply Gym and The Gym Group.

Amsterdam is only an eighth of the size of London with a population of 821,752 squeezing into 219.4 square kilometres.

By comparison, London has 1,572 square kilometres and 8.136 million inhabitants.

That is such a stark difference it deserves an article in and of itself and it really comes down to personal preference. Do you prefer more anonymity? Or do you love having little areas within a big city?

Both cities are well located geographically with easy access to Europe. You can get from London to Paris in a mere two hours and from London to Amsterdam in four hours.

Amsterdam is about the same distance from Paris as London, but it is on the European continent so there is possibility to drive to other destinations such as Belgium, Germany and Denmark instead of flying or driving much longer distances like you’d need to do from London.

Food is expensive, eating out is expensive and rent and housing bills are expensive. Expatisan, a cost of living calculator that allows you to compare the cost of living between cities around the world, revealed that Amsterdam is 19% cheaper than London. The prices were updated in November 2019 on the latest exchange rate.

The cost of living in both cities is very high. I doubt anyone would say either are affordable. Rent is about the same in both cities. For one room in a flat share, you will pay around 500-800euros/pounds in both Amsterdam and London. This is what we feel like when we have to pay rent in both cities:

London is the most multi-cultural city in the world, and it shows in the variety of cuisine. You can access anything your heart desires – Japanese, Mexican, Indian, Moroccan… the list continues.

Amsterdam is a lot smaller so does not have the same selection as London but nonetheless, it is still a capital city with lots of variety.

Service is more intense and “Americanised” in London, with fast, friendly staff. Servers in Amsterdam are far more relaxed and you’ll likely be waiting a lot longer to have your order taken.

In London you can travel with either an oyster card or your bank card through contactless. In the Netherlands, you can only travel with a designated travel card which is either an OV-chipcard or an NS discount card. Travelling with contactless on your bank card in London and NS discount card in Amsterdam are both much simpler as you don’t have the faff of topping up a travel card each time the money on your card runs out.

Amsterdam’s transport network is less extensive than London’s and a large reason for this is the fact Amsterdam is built on water which limits the underground transport system. For example, in 2002, construction started on Amsterdam Zuid-Noord metro line. 15 years later it was completed but it quickly became evident that Amsterdam’s precarious historical underground was a less than stable foundation for the new metro line. The result? Houses built above it literally began to fall into the earth.

Residents were forced from their homes, and even after the line opened ten years later most of the buildings were still empty.

The biggest difference in transport is that most people cycle in the Netherlands. In Holland, there are designated cycling paths and Dutch people say they teach their kids learn how to bike before walk.

Amsterdam is home to more bikes than people and everyone is a prolific cyclist. Need to go to work? Cycle. Need to meet a friend for coffee? Cycle. Bought a sofa and need to transport it to your house? Carry it on your bike. Need to travel to Spain? Cycle. Well maybe not the last one but you get my point.

It is of course possible to cycle in London but far more dangerous as there are not many designated cycling paths and people are not as aware of cyclists.

We could summarise Amsterdam’s weather with the following meme:

Since Amsterdam is situated very near to the North Sea, cool winds often blow across the Netherlands generating a ‘moderate maritime climate’ with warm(ish) summers and cold winters. The weather in Amsterdam is defined by the high precipitation (roughly 840mm/year) meaning there is no real dry season.

Nonetheless, there are reasons to be grateful for the crappy Dutch weather. Perhaps all that time stuck inside sheltering from the rain makes them incredibly innovative! (okay, we’re trying to find a silver lining here…)

Weather in London however is somewhat mild in comparison. Summer temperatures usually sit in the mid-twenties but it is common for London to experience temperatures well above 30°C. London. London gets about 106 rainy days a year (583.6mm).

In most cities talking about the fact English isn’t a country’s native language would need to be addressed but there’s almost no point when it comes to the Netherlands. For the last few years, the Netherlands has competed with Sweden for the number one ranking on the  EF English Proficiency Index. As it currently stands, the Netherlands is ranked first (take that Sweden…)

However, to truly assimilate it is important to learn Dutch. It will help with integration and work opportunities. It is not the easiest language to learn but many people have successfully done it.

Both cities have a public healthcare system, called the ‘NHS’ (National Health Service) in Britain and just ‘healthcare’ in the Netherlands.

But anyone who works in the Netherlands needs to pay a compulsory €100+ per month for health insurance. Without that you will need to pay the full whack of everything from GP visits to surgery.

A reddit thread asking people to compare experiences of living in both Amsterdam and London gleaned insight into the exclusivity of Amsterdam. One user commented that “Amsterdam feels provincial and the mindset of the people reflects it. It’s not multicultural at all and there’s a huge gap between Dutch people and expats because of the language. There are things I miss (Albert Heijn!) and I can objectively say that quality of life is better in Amsterdam and I think in general thinks work better in the NL. But the city lacks the energy and opportunities that London has to offer and I wouldn’t move back for anyone.”

Another user commented “Amsterdam is certainly more relaxed and laid-back than London; the pace of life is slower, and people are less rushed and busy, and take more time to enjoy the little pleasures of life.”

8Which city is safer?

According to the latest report by Economist Intelligence Unit (EIU), Amsterdam is the safest city in Europe. By comparison, London ranked 14th in the same report.

The report included 60 cities around the world and analysed 57 indicators contained within four types of safety. These four main categories were digital, infrastructure, health and personal security.

Like anything, it comes down to personal preference. Both are bustling capital cities with incredibly appealing aspects and huge variety. London has more to offer and more going on, just by the sheer size of it but Amsterdam, for such a small capital, does pretty darn well. 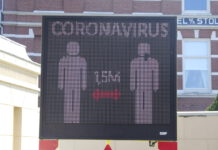 Amsterdam exceptionalism: why the Dutch capital might be the last to relax coronavirus restrictions 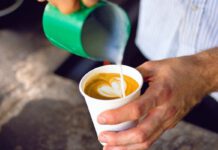