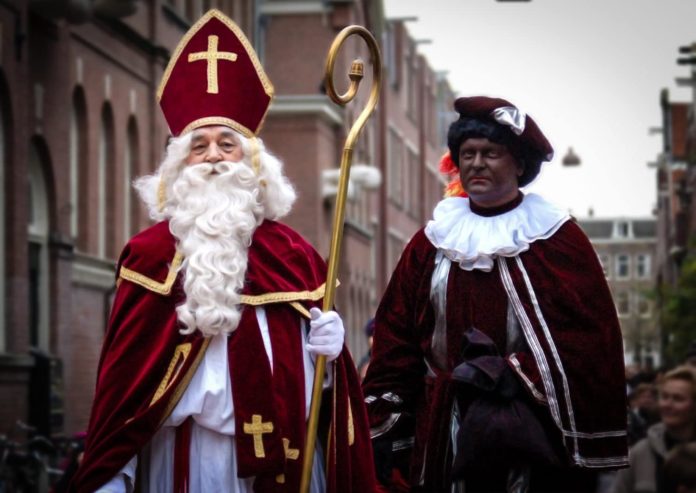 Zwarte Piet. Zwarte Piet. ZWARTE MOTHER****ING PIET, EVERYONE! Yes, it’s that time of the year again, and again, and again… The war around Zwarte Piet is far from over, and with the upcoming Intocht (Arrival, entrance) of Sinterklaas this Saturday, passion will flare up once again as defenders and attackers of the Zwarte Piet tradition will go head-to-head with each other.

Then this marvelous piece of participatory journalism hits the Web:

It took me about a minute of watching before a haunting sense of familiarity crept over me, not unlike finding a tarantula between your bedsheets for the second time. ‘Wait a minute!’,  I exclaimed. ‘I recognize that shrill, whiny voice… Sunny Bergman, you damned dastardly feminist frequenter of upholsome liberal values, you!’ Yes, it was none other than Bergman, the feminist filmmaker who recently showed us how women are the true victims in the dating game with a one-sided documentary called Sletvrees (entirely not one-sided review by Yours Truly right here).
In this particular video, Bergman and some other person walk around in a London park dressed like Zwarte Piet (sort of) and approach random British people with promises of strooigoed, the delicious Sinterklaas season candy. Needless to say, everyone who survived the editing process of this video is offended by this blatant display of racism, including none other than Russell Brand, who just so conveniently happens to be passing by.

Though I will make no secret of the fact that I find Bergman an annoying and small-minded person, I can appreciate her experiment anyway. We at DutchReview know all to well how awkward it can be to explain our Sinterklaas tradition to people from other countries, and this provides us with a new and richer way of examining our own culture and values. The debate about Zwarte Piet, though at times tiring, is a very important one, as it forces us to show how we look at ourselves, at others, and how we deal with racial issues in a multi-cultured society.

Bergman’s Zwarte Piet outfit. The clothes are good, but her make-up is down-right creepy, as if she wrestled herself into a skin-tight brown leather mask, making her facial expressions seem unnatural in an Uncanny Valley kind of sense. It’s hard to be sympathetic to a character whose skin looks like that of a reptile and whose eyes have all but disappeared into a blur. She resembles Zwarte Piet in the same way that Stephen King’s It resembles a clown. It’ll be like taking It to a children’s party and then filming people while you ask them whether this is their idea of a good fun.

Moreover, after watching the video, it wasn’t quite sure to me whether this video was supposed to show us how racist the Zwarte Piet tradition is, or how rude and ill-mannered the British are. Many of the people shown there were offensive, cussed non-stop and one even became violent. Is this supposed to be the civilized alternative to a questionable tradition?

Moot, as in: points which may or may not be true, but are irrelevant to the topic regardless. The biggest moot point here is that it is a given fact that people often do not understand something from another culture or subculture. Of course the British, having never celebrated Sinterklaas as a child, have no frame of reference, other than that it’s some sort of colonial Christmas, I guess?

If you tried to explain to a culture that doesn’t known Halloween how we dress up little children like monsters or serial killers, it is to be expected that they would be offended by it. Of course, people who grew up with the tradition understand that it is all make-belief, and only scary in a good sense. Likewise, people who don’t join a fraternity may not understand hazing, people who are not religious may never understand certain rituals, et cetera.

Moreover, we should always be cautious whenever we see a compilation of responses in front of a camera, and for the simple reason that we only get to see what the director wants us to see. Pay attention to the fact that there is almost never a continuous shot of a person for more than ten or fifteen seconds, so none of their remarks are shown in the context of the rest of the conversation. Editing is a tool that gives total power to the filmmaker, because s/he can erase, cut off, or overlap images and sound at will. Of course the end result will support his/her opinion.

Bergman will haunt my dreams tonight. Also, we still don’t know if Zwarte Piet is racist or not, and what to do with this tradition.

I wish everyone, whether they oppose of the Zwarte Piet tradition or not, a happy Sinterklaas celebration.

The Dutch have finally got their head around British sport (watch inside)!

So, it looks as if Dutchies finally understand British sports. Comical and true as heck when it comes to cricket,...