“It is an act too often neglected,” said the fox. “It means to establish ties.”

So begins my favorite chapter of Antoine de St. Exupéry’s book, “The Little Prince,” in which the fox has just met the book’s eponymous prince, who has just arrived from another planet. The fox reveals to him the invaluable joys that friends bring to our life: 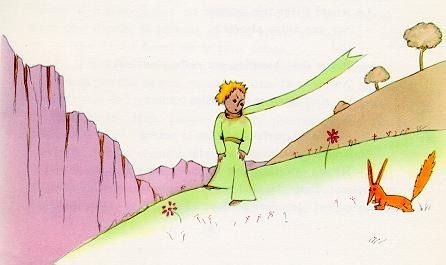 “…if you tame me, it will be as if the sun came to shine on my life….you have hair that is the color of gold. Think how wonderful that will be when you have tamed me! The grain, which is also golden, will bring me back the thought of you. And I shall love to listen to the wind in the wheat.”

Making friends in a new country can be even more important than doing so at home. We may not have arrived from another planet, but it sometimes feels that way. Our friends abroad help us feel that we are not alone in what can sometimes be an intimidating new country, particularly when you don’t yet know “the ropes” as you attempt to integrate into your adopted culture.

Most expats agree, however, that making friends in a new country is not an easy thing, particularly for those of us who are not naturally outgoing. Happy as I am that I left the United States, I do sometimes miss that easygoing way Americans have of making new friends. You meet someone with whom you have something in common, and the next thing you know you’re sharing family vacations.

In my experience, most Europeans tend to form their core group of friends when they are still in grade school. Past about the age of 25, it is nearly impossible to break into that elite coterie, even if you share similar interests. Although I have made friends with natives in every country in which I have lived, there was always a certain wall that could never be breached, no matter how long I had known them. They were always fun and polite, but not friends I felt I could call in the middle of the night if I were stranded somewhere.

My lack of complete fluency in my European friends’ native languages has no doubt had something to do with it. They’ve got to be annoyed after a while feeling they always have to speak English (even if they speak it as fluently as most Dutch do), or having to endure me mangling their language at a rate that makes a slug look speedy.

I think one reason English-speaking expats tend to band together is that moving to a new country requires a lot of changes, big and small. Most changes are for the better (or we would not be living here), but it’s natural to want to gripe to another foreigner about how certain things are handled, be it the train system or the weather. The Dutch complain about these things too, but they often have a proprietary sense about their griping. Kind of like it’s ok if you’re always insulting your little brother, but if anyone else insults him you’ll kick their ass. I can’t tell you the number of native Dutch who have told me they think the train system here is stellar.

Getting used to saying goodbye

The downside of making friends with other expats, however, is the high likelihood that your friendships are bound to be somewhat short-lived. Being a foreigner does wear on one after a while—never feeling completely at home, regardless of how much you have adapted to the Dutch way of life. And no matter how talented you are, finding a good job in the Netherlands, particularly after age 35, is nearly impossible.

A good friend recently told me she and her family were considering moving back to the States after having lived here happily for a considerable number of years. I suppose by now I have grown somewhat used to it, but it never gets any easier. Although it’s difficult, I have grown accustomed to letting people go.

The thing is, until recently, I was always the one doing the going. Until 5 years ago, it was me who was continually moving to a new town or country. My friends could count on my annual e-mail telling them of my new address (always in pencil, of course). Now I’m the one who has stopped moving. One day, a few years after I had moved abroad, my best friend called from the States and asked “when are you coming home?” I replied “What do you mean? I am home.” Not all expats feel that way.

What I have come to find over the years is that, no matter how long or short the friendships I have made abroad, my life has always been enriched by having made them. And all I can do is wish them well on their way. Once more, the fox says it best, as the little prince goes to take his leave:

“It is your own fault,” said the little prince. “I never wished you any sort of harm; but you wanted me to tame you…”

“But now you are going to cry!” said the little prince.

“Then it has done you no good at all!”

“It has done me good,” said the fox, “because of the color of the wheat fields.”

Few are more passionate and devoted to animal rights activism than the Vegan Streaker. Peter Janssen strongly believes in ending...