Amsterdam’s – The School of House: Learn from the Best

It’s safe to say that tulips, cheese, and building dikes are right up there with dance events and house music as a typical Dutch proficiency. For as long as I can remember (which would be the sweet nineties) the Dutch have been dominating and innovating in this musical genre, so it shouldn’t come as a surprise that The School of House has opened its doors in Amsterdam, and now offers you every kind of course needed to make it in the dance and house music industry. Before we figuratively step inside the school, let’s take a closer look at how the Dutch have come to dominate Dance.

Dance capital of the world

It isn’t a coincidence that the Netherlands, and specifically Amsterdam, are dominating the Electronic Dance Music scene (or EDM, which is the handy abbreviation for all that house, dance, hardcore and techno nowadays). When it comes to both DJ’s and festivals, the Dutch are overly represented, so let’s take a closer look.

Out of the top 10 DJ’s of the world, 5 of them are from the Netherlands. Most of them have been at the top now for a long time; including Tiësto and Armin van Buuren who are household names in the EDM world. In addition to these industry stalwarts there’s also some rising stars, most notably Martin Garrix, who can’t even legally drink at many of the festivals he performs at but is old enough to be the number 3 DJ in the world, but it doesn’t stop there! Since the 1980’s Dutch DJ’s have been prominently represented in all genres of house music, and from 2003 onwards at least two Dutch DJ’s have been included in the world’s top 3. It also helps that artists such as Secret Cinema, who was formerly known under the name Jeroen Verheij, are constantly reinventing themselves.

Anyways, in case you’re still reading this article without any background music, let me fix that with some Dimitri Kneppers mixing Canto Ostinato

Exhibit B: Festivals and parties

Going to a dance party or festival in the Netherlands should nowadays be on the same list as seeing a windmill or standing in line for the Van Gogh museum. We’ve already written about the massive Amsterdam Dance Event, which is when all the big names of house converge on Amsterdam in the Autumn for a party filled week, but then there’s also of course the festival season, where everyone can go to a variety of big and/or smaller boutique festivals, such as Dekmantel and Thuishaven. 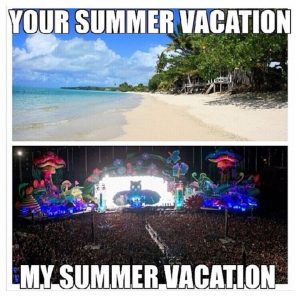 Honorable mention goes to ID&T. These titans of house parties have been entertaining us since the early 90’s. First with hardcore stuff like ‘Thunderdome’ and nowadays with household names like Sensation and Tomorrowland. They’re also the organization behind Mysteryland, which is now the longest running electronic music festival in the world:

The dominance of Dutch DJ’s on worldwide music charts has paved the way for 170 dance music events in the country with 2.7 million annual visitors every year, making it a significant contributor to the Dutch economy. The export of popular Dutch music alone is worth roughly €160 million and rising. With all this economic value, DJ’s and parties, the EDM scene has now grown up, but with this maturing up comes the responsibility to pass on all that knowledge and hire people who know what they’re doing and have learned from the best. Luckily, there’s now also such a thing as The School of House.

The School of House (props for that name) opened it’s doors 2 years ago and is the go-to place for everybody who aspires to find employ in the ever growing music scene. Founder Jan-Maarten Hartong is a DJ himself (DJ JAMA), and started this venture when he saw that there was demand for Dance Industry-orientated studies that more traditional event and music schools (such as the conservatory) couldn’t satisfy. Together with a growing Dutch dance industry that is always on the lookout for talent to strengthen their business, Jan-Maarten and co-founder Duncan Stutterheim (head-honcho of the aforementioned ID&T) put one and one together and came up with The School of House.

So what do they teach?

Their courses and masterclasses are aimed at anyone who wants to work in the dance-industry, with the School dividing their courses into 3 categories: Artist, Events and Music. Now, not only can you learn the finer aspects of being a DJ as one would expect at a place called The School of House, but you can also pick up skills on how to organize a rave or how to put a budget together for a proper techno-festival.

It isn’t a traditional school in the sense that they will keep you in a boring grey classroom all day long. Courses are always carried out together with some of the bigger names in the industry, such as Roog, Oliver Weiter, Duncan Stutterheim, Michel de Hey and rising star ‘De Sluwe Vos’ – whose name translates into the ‘The Cunning Fox’ (a very suitable name indeed).

Besides the to be expected big DJ names, you also have the opportunity to learn from the best in the business when it comes to matters such as putting a program together for a dance-festival. That’s a good thing because somehow I’m thinking you can’t learn from a textbook on how to sign the bigger DJ’s for a festival on a Saturday in July.

With most of the stuff they do they try to take you out of the classroom and actually onto some dance industry venue, thereby mixing up theory and practice (and business with pleasure: BOOM!). Not that it’s so bad to be attending that school’s location, because it looks like this:

They also function as the the go-to party for when you have any questions/consultancy on dance matters. Which is apparently and awesomely, a royal affair:

In case you’re intrigued and think that having something like ‘Amsterdam – The School of House’ on your resumé will beef up your chances of finding a job in the dance industry (surprise – it will!) then you’re in luck, as they’ve just begun to run courses in English. There are still a few spots available before they kick-off at the 22nd of June, so don’t doubt too long!

And now for further pleasure, some Oliver Weiter, enjoy!