Dutch Jihadists, Our Next Best Thing After Cheese And Tulips

In one of my first articles for this site, I made a joke about how the export products of The Netherlands include “cheese, tulips and murder.” This was a reference to two individuals who, when coupled together, would make a Brad Pitt & Angolina Jolie duo straight from Hell: the pretty-eyed FARC member Tanja Nijmeijer and the globetrotting killer with at least two hits on his name: Joran van der Sloot. All bad joking aside (on that note: there’s more bad joking coming your way in just a few sentences), it seems that I was either too accurate when typing that or the Universe is reading DutchReview and decided to do me a rather awkward favor. Because for a few weeks now, it has become more and more apparent that the Dutch are exporting youngsters to fight in Syria. Yes, there is actually such a thing as Dutch jihadists.

After the two minute mark (and before the rather hilarious bunny-stance shooting at 2:21), you can clearly hear two rebels speaking Dutch to one another. Here’s another video gone famous featuring Dutch audio comments on an evening prayer by members of the SRA. According to some recent estimates, over 1,000 Muslims from Europe are currently engaged in the fight over Syria, a civil war that has been raging for over two years now. The estimates of the total number of Dutch jihadists vary, but generally lie in the 50-100 range. Also, two have already been confirmed dead so far; the below pictured Mourad (20) from Delft (a city most notable for not being either Amsterdam or Rotterdam), and Soufian, also just 20 years of age.

All of this is brewing concern among the Dutch, though not necessarily for the proper reasons. Why not? Well, let me explain that with another offensive joke, you know, just in case you ever need to bring a party gone stale back to life. It’s one of those answer-response kind of jokes where you prey on the naive interruption of the audience. The set-up is the following PC-friendly sentence: “If I ever become president, I’m going to kill a million Jews and one clown.” If your target audience consists of n00bs, one of them will surely ask: “Why the clown?” Now is your moment to shine: gleefully stare every surrounding individual dead in the eye and matter-of-factly retort: “See? Nobody cares about the Jews!”

If you’re still reading this (in that case: shame on you!), then here’s the part where all this racist shenaniganism becomes relevant: all jokes contain a grim core of truth. If you really want to know what makes a person tick, it pays to pay close attention to the joke s/he makes and the things s/he laughs about. It’s no secret that we often laugh the hardest at things that are taboo, things that are either physically or morally repulsive. “Laughter is proof that life is unbearable”, said some pretentious wine-swirling philosopher whose name has escaped me. But back to the racism: the joke is funny because it pokes at one of the most horrid crimes against humanity in the history of ever (I never said humans were a lovable bunch), and its equal parts disturbing because it also reveals our tendency to care more about one individual than an entire group of people. All pretensions to universal rights aside, we are still a tribal species who have an instinctive urge to classify all people into an Insider/Outsider system of categorization. It’s in our nature. As the cliché goes: “One death is a tragedy, a million deaths is a statistic.” And here’s a statistic to further lighten up your day: the total death count of the Syrian uprising has, depending on what estimate you go by, recently breached either the 60k or 70k barrier. 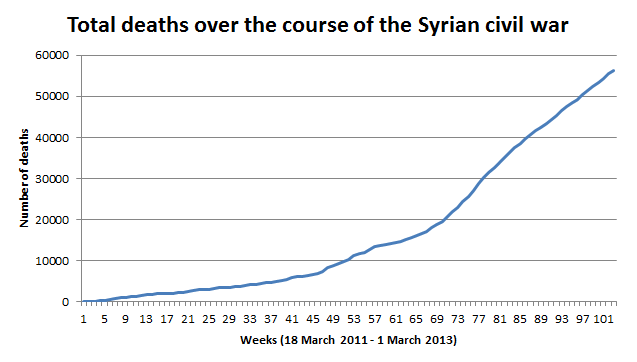 Depending on what estimate we go by, that means that the two Dutchmen who took their last breath on Syrian soil comprise only 0.00333…% or 0.0029% of all casualties so far. But 60-70k deaths has not yet been a reason for the West to interfere in Syria. The reluctance of the West to act amidst this humanitarian disaster has been a subject of debate that is almost as old as the conflict itself. Especially considering the assertiveness shown by France and Great-Britain, backed up by West-Europe, the US, and the Arab League, to provide air support to Lybian rebels during the uprising in 2011, the lack of incentive from Western powers has, and not without reason, been labelled hypocritical. In all fairness though, the situation in Syria is freakishly complex; a geo-political quagmire wherein various economic, religious, ethnic, and political fractions are vying for power (or as we like to call it: George RR Martin’s wet dream, but probably with less dragons and royal incest).

But none of that pseudo-intellectual political analyses can obscure the fact that yes, we’re finally becoming concerned over the fate of the Syrian people… now that their conflict has spilled over into our social sphere and we fear dozens of religious fundamentalists with PTSD coming back home. So yay Holland! I guess.

Previous articleThe wolves are back!
Next articleSolutions for the economic crisis: more cyberwarfare schools!