This  is not the best week in International politics. Ukraine is flirting with civil war, John Kerry revamped the term ‘cold war’, Uganda accepted an anti gay bill turning gays into gay inmates with life sentences and now Europe has passed a bill this Wednesday advising member states to prohibit sex work based on the Honeyball report.

The Swedes have been trying to sell their Swedish prostitution model to the Dutch in a nice travel sized package (criminalizing clients). It kicked up some dust.  Quite the opposition to the model seems to be swept under the rug to protect its ‘legitimacy’. There’s even an alternative successful model in New Zealand. A lot of countries have their international show ponies. This model apparently is Sweden’s. Unfortunately this show pony turned out to be very ill. Flesh eating bacteria of sorts. Strangely enough putting it to sleep didn’t seem to work. Apparently it was already dead…

But then English parliamentarian Honeyball looked deep into the pony’s eyes, took pity on the zombie show pony, adopted it and imported it to Brussels where it could roam freely to feed on EU brain. The pony gorged itself at the walking dinner.  And so now the EU passed her bill served up by Honeyballs minions at FEMM advising member states to prohibit sex work and criminalize clients.  Turns out it’s easier for parliamentarians to sell support to disempowered and victimized trafficking victims to the folks back at home than it is to sell empowered and able sex workers. Who knew?

Obviously Honeyball has got her eyes on the prize. The big question is if that prize actually includes the lived realities of the very sex workers she is claiming to protect. So therefore I would like to coin a definition for the term:

Verb [U] /ˈhʌn.i bɑːl/
1. To convince oneself to be protecting sex workers while actually hurting them.
Example: Many politicians are Honeyballing the prostitution debate
2. A variation on the act of snowballing with inclusion of honey for added sweetness.
Example: Me and Mindy have been Honeyballing all night!

Banning prostitution, or its blue collar synonym: sex work, does very little to protect the women actually doing the work. It’s ludicrous to believe that the oldest profession in the world will, and should, magically disappear. This is not a realistic notion and there is plenty of herstory to proof that prohibition of prostitution has never really worked. Prohibition is not something new, just flipping the board to criminalize clients instead of workers doesn’t change the fact that the act is made illegal. It only revokes some of sex workers new found rights. It’s Honeyballing. 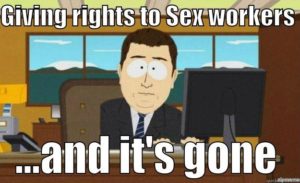 Now I would like to point out that the Swedish model makes good arguments.  I don’t want to Honeyball the Honeyballers. It may come to the wrong conclusion in my opinion, but good point are made. There is obviously still plenty wrong with prostitution: especially in the overlaps with human trafficking.
Wouldn’t it be shocking if anyone would ever come out in support of human trafficking? Human trafficking is the worst. But the fact that some people are desperate enough to be involved in this business might have something to do with the social economics of globalization. It’s not just evil people doing evil things. Although that makes for a far easier and sexier campaign message.  Human trafficking and prostitution are also not the same thing and confused often in debate or used interchangeably.

Shifting the focus and scrutiny from workers to clients is a big improvement in comparison to the approach overseas where it’s allowed for police to make use of a prostitutes services and to arrest them afterward.

The Swedish model also rightfully deals with the misconception that there is little to no underground prostitution taking place in countries that legalize prostitution. This is BS. It’s far from ideal that in systems with legalized prostitution this will still draw in a larger group of illegal prostitutes. But these issues will only get resolved in cooperation with sex workers themselves and I’d rather work with them instead of distancing myself from them and cut of their ties to the system. If we want to help illegal prostitutes we have to find them first. And in most cases if we help them they get little to no compensation for their slavework  and most are likely to relapse. It’s not as simple as rounding up the thugs and putting them behind bars.

Why does the profession have to be abolished? How can research conducted in name of this model account for sex workers going underground or moving abroad?  How can it account for sex workers turning their back to the system and taking matters into their own hands? Believe me: there are plenty of sex workers with a healthy distrust for the government. How are these sex workers accounted for if they are invisible? How can any research be credible?

Do we really want to make things worse for this already culturally stigmatized group of people? Do we want to keep slutshaming them out of existence? Do we really want to take away focus on providing them with proper healthcare, proper working conditions, unions and render them unobtainable to law enforcement? We’re talking about millions of women worldwide that we keep pushing back into the dark.  I say let’s empower these bitches. If Beyonce can dance like a hooker in a video from her new album and call herself a feminist then they can too!

Not that Amsterdam has been a shining beacon for prostitution lately.  We’ve been dealt some hard blows in recent years. The city municipal of Amsterdam trying to close down windows in the red light district to thwart bigger criminal organizations hiding behind the whorehouse façade sounded like a brave but foolish venture from the get go.
It turned out to be quite the expensive debacle and it’s pretty unclear with the diminishing red glow on the canals what actually happened to the women who used to turn on those red neon lights. I hate to say it, but the Amsterdam municipality kind of Honeyballed this one.

Last year Utrecht has also closed down boats prostitutes were working from at the infamous Zandpad. Thank god they came back to their senses and recently offered them a new temporary work location.

So not all is lost. For now we will have to fight on both the national and the European front to keep moving forward. Thankfully plenty of scientists and NGO’s are speaking up in defense of sex workers and most importantly sex workers themselves are becoming more organized and more visible. Let’s  empower these women and give them the freedom and rights to define prostitution on their terms and assist them the best we can. Above all let’s keep a dialogue going with them instead of, you know, Honeyballing them. 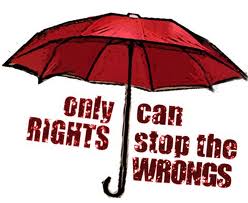 But what do you think? To Honeyball or not to Honeyball? That is todays question.

For some more insightful and intriguing intel on Dutch prostitution from the frontline (in Dutch): http://zondares.blogspot.nl/

Previous articleMisplaced Jews and Urban Peasants: De Klassieker
Next articleThe Crisis in the Ukraine – some thoughts from a different point of view