The Martkhal in Rotterdam: One Year later (Part 2) 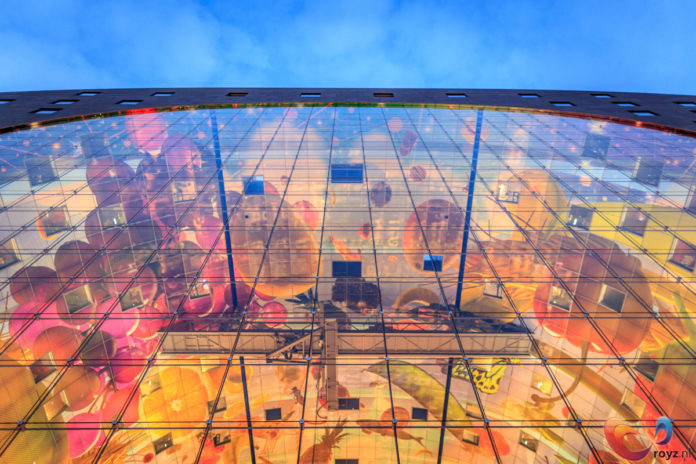 First off, If all you think now what is this ‘Markthal’ thing, then read part 1 right here (spoilers! I loved it)

I have been to Markthal about 7 times in the first two weeks. Excessive, I know, but I live in the centrum and so it’s impossible to control myself, for I really like architecture and new urban developments. We had guests over for dinner one night and so I’ve decided to test the Markthal concept and shop for the dinner solely there.

So, I went – starter, nibbles, main course, wines, toetje, some chocolate with the coffee and a piece of cheese. I was very excited about it, planned my shopping list for dinner of 4 and loved getting it all under one roof. Very convenient.

Not that I want to share what I eat but just to be fair and disclose that I wasn’t exactly making a lobster:

I enjoyed the shopping experience, no question about it, I didn’t enjoy the price that came to 120 euro. The only premium item was the meat for the main course, the rest of the ingredients were of daily/normal consumption and that’s were I see the main challenge.

There is no question about the importance and beauty of this building. I’ve said it before and I’ll say it again, it is a must see. But can it survive? I see a lot of people walking around and not that many people shopping. For items you cannot get easily anywhere else or luxury gourmet bits that you indulge in every now and then, it’s fine. But for your routine shopping of fresh produce that sits 2-3 times above the regular outside market price, I wonder how sustainable it is.

In France it’s a norm that people pay a grave attention to their food. Food is a religion. You do not buy plofkip, you buy honest organic produce, boulangerie and cheese shops are part of people’s daily rituals. But we are in Holland. The land of bitterballen, fillet Americain, croquettes, the land of Febo…the land of cheap food being the ruling religion.

I look around the center of Rotterdam at the many beautiful and far too many abandoned architecture jewels and hope Markthal won’t be one of them in the next 5 years. It would be such a shame. And on the other hand, Rotterdammers like their city with not too many bells and glitter on it, so the Martkhal being too popular for regular shopping also isn’t on the wish list.

Perhaps it can generate enough turnover from business lunch visitors, tourists and random shoppers who haphazardly get seduced by a cake here and the real Jamon Iberico there.

The Markthal: one year later

So how has the Markthal been doing for the last year? Well the first couple of weeks were of course filled with joy and praise (like this one, once more 😉 ). And it has been quite the ride for the Markthal. Even Jamie Oliver will descend down from his culinary corporate throne to visit the Markthal, which at the same time also causes some culinary debate. And then were some other troubles as well, such as the two cases of arson, some serious heat during the hotter days of summer  and water damage. Sad, but also perhaps not unexpected for a young building in a big city as Rotterdam, child diseases one might argue. A more worrying signal could be the closing of artisan butcher in the Markthal, he moved away since he found the Markthal to be too touristic and only suited for bars and such, not shops. Will the Markthal suffer a similar fate as it’s big example in Barcelona; La Boqueria?

Only the future will tell. In the meantime, if you crave a foodie paradise combined with eye-catching modern architecture, look no further than Markthal.

Of course pictures won’t represent it truly like being there. But we found the pictures that do it the most justice. Thanks Roy Poots for lending us these awesome pics of the Markthal. Check out his website ROYZ.nl for some truly beautiful pics on typical Dutch places and some of the most interesting spots on this planet.