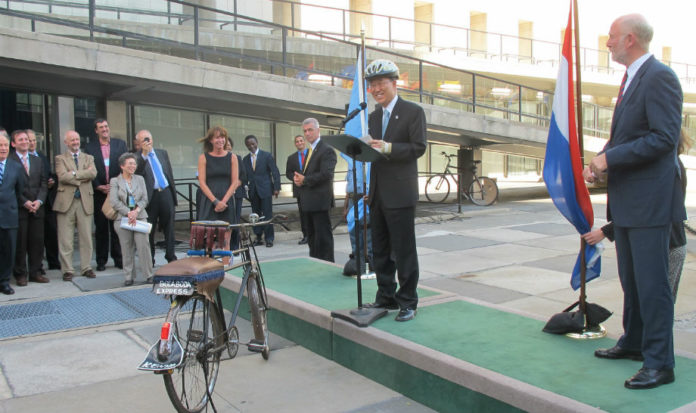 While the world stands on the brink of a military intervention in war torn Syria, Secretary General of the United Nations Ban Ki-moon adressed hundreds of students, scholars and civil servants, members of parliament and other officials at the Freedom Lecture on Wednesday in Leiden, a lecture organized by the Leiden University. His message was one of hope and diplomacy.

No better place in the Netherlands to speak about war, peace and hope than Leiden. The city, which had its university given to it by William of Orange as a reward, thanking the city for its struggle and hardship during the Spanish occupation, has a long tradition regarding international rights. Hugo Grotius, the famous architect of international law long before the United Nations existed, studied there and Ban Ki-moon was right when he pointed out that everyone attending the lecture in the Pieterskerk “is carrying forward that proud tradition”.

At the time the lecture was scheduled, the main topic was intended to be freedom, as it is every year at the Freedom Lecture, whose first speaker was Salman Rushdie in 2010. Whilst time has leapt forward and the violence in Syria doesn’t seem to be ending, every attendee was secretly and not so secretly waiting for Ban Ki-moon’s statement on a possible military intervention in Syria. After the possible use of chemical weapons, America and other western countries seem to be preparing for an intervention with force.

Where will the UN stand in all this? A mandate from the Security Council for an intervention is unlikely, with China and Russia blocking such a resolution. So intervention therefore would be against international law, because the SC need to give out a mandate for such an intervention to be legitimate. The UN secretary general defending an intervention without a UN mandate, would be out highly controversial.

Luckily, Ban Ki-moon did not. He defended, just like he did at the celebration of a hundred years of Peace Palace in The Hague earlier on Wednesday, the possibility for diplomacy and peace talks between the opposing camps. This emphasis on diplomacy was embedded in his speech in Leiden, which was full of hope for a better world. He spoke about Martin Luther King’s dream, stating the case for “a common future with shared responsibilities”. He quickly moved on to the UN’s Millenium Goals and what will happen post-2015, the year these goals were set to be reached, the agenda on fighting poverty and aiding sustainable development. Later he talked about the rights of women and other minorities, like LGBT’s, praising The Netherlands as being the first country where same sex-marriage was legalized.

In one sense, his speech was nothing new: he spoke about about all the important things that the UN does and should do. Fighting poverty and climate change, making a stand for a more sustainable and peaceful world. This doesn’t mean that it is not an important message. Because while Syria is awaiting the bombs from Western countries, two and a half billion people still have no access to sanitary facilities and thousands of children die every day as the result of diseases that can be easily cured with medicines that are readily available in other parts of the world. It is the task of the international community and the UN, who essentially represents it, to raise awareness and do something about it. By doing so, Ban Ki-moon gave a great and important speech on Wednesday.

Previous articleWhat is in a name?
Next articleAll Crime and No Punishment in the Digital Age