There we go people! Voting time is upon us, and it’s going to be a big one. All eyes of the world are upon us, which is pretty confusing because normally the encyclopedia had an image of the Dutch parliament pictured next to the word ‘boring’. Let’s have a look at the latest polls.

Where are we heading?

So for what its worth, here are the latest figures, but after Brexit and Trump we should know that they’re about as trustworthy as a White House spokesperson: 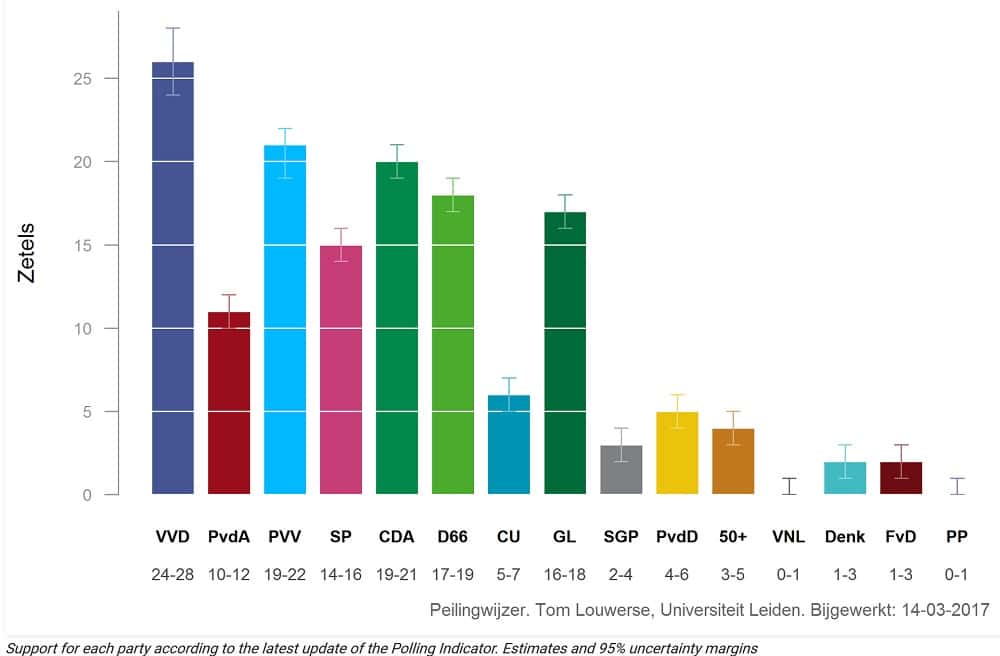 A year ago I would have easily put my money on the VVD (People’s Party for Freedom and Democracy) to get out on top, but let’s face it – if the trend from the UK and the US also sets in here Geert Wilders’ party PVV (and DENK for that matter) will probably get 2 or 3 seats more than projected here. It’s because of two factors, and there’s no reason to believe that we’re different than the US or UK in that aspect:

1. Pollsters don’t reach as many PVV’ers as they do with the normal/mainstream parties
2. People are still a bit shy to admit in polls that they’re voting for the PVV, since not that many people want to be associated with a one-page nonsense plan (and okay, because of biased media outlets like this one you’re reading here).

Anyways, to understand why the PVV might just grab this one by a few seats after all, I can heartily recommend this piece by moviemaker/renowned fat guy Michael Moore.

But is safe to say it’s going to be tight and we might even have a situation where 5 parties come out at the same amount of seats (but probably not). Oh, and the immensely hated DENK – those soldiers of Erdogan will also get 2 seats or more – because pollsters can’t, for the love of god, reach these Turkish and Moroccan voters.

And after the elections?

This is, surprisingly for some, less tight and tense than the possible voting outcome. It’s going to be a coalition of the VVD, CDA, D66 and probably GroenLinks as well. Maybe they swap one of these parties for the Christian Union or the Labour Party (PvdA). Even if Wilders is going to be the biggest there’s no way in hell he will be able to form any effective coalition. The SP will never go for a coalition with the VVD. The PvdA will lose so big that they’re morally bound to go in the opposition. And fringe parties gonna fringe.

Enough already, just tell me what to vote?!

First of all, just go voting if you can, most of the parties will do alright. But if you ask me I say: D66! They’ve got an internationally minded program, don’t seclude anyone with their rhetoric and got some pragmatic plans I really like. Take for instance the new ‘wiet-wet’ (weed law), the organ-donor legislation (which will safe lives) and the euthanasia bills – those are the progressive plans I want to see from a future government. Add that to a thought out economic policy and a strong stance for the (international) rule of law and you’ve got a worthy choice for your vote.

Honorable mentions and certainly also worthy considering is Jesse Klaver of GroenLinks, bringing some much needed optimism into the current political landscape and also hard on the tax dodging of international companies and banks. Another interesting one is the Pirate-party, because digital freedom is an important thing nowadays.

But VVD, PvdA, SP also have some good points – if they’re up your political alley than they might be a good choice as well.

“Jeeh, what a soft article this is turning out to be DutchReview…”

Anybody not to vote for DutchReview?

Providing you’ve been with us for a while you know what comes next:

50+ If you’re in that age-group and voting for them you’re just selfish (if you’re younger than 50 you’re a cynic, and stupid).

DENK. Don’t get me wrong, there certainly is some intolerance in the Netherlands. But a vote for this Erdogan loving party isn’t going to solve any of that, certainly the SP, GreenLeft or D66 are better choices.

And finally, providing you’ve been with us for a while you know what comes next. Although we all certainly not under appreciate the feelings of potential Geert Wilders voter (globalism isn’t a victory for all, Islam and its supporters sure has some nasty sides to it and the EU certainly isn’t perfect) I can only ask you for the last time not to vote for the PVV. Come on people, a one-page party program isn’t worthy of your vote, and things are nowhere near as bad for nobody in the Netherlands that Geert ‘Hoe Dan?’ Wilders deserves your vote. Do you really want to be on that side of the fence?

You’ve got one vote, make it count for a better future!

Previous article10 Things we learnt from this Dutch Turkish Craziness
Next articleElections 2017 – Will Turkey Spat Mean Boost for Rutte?