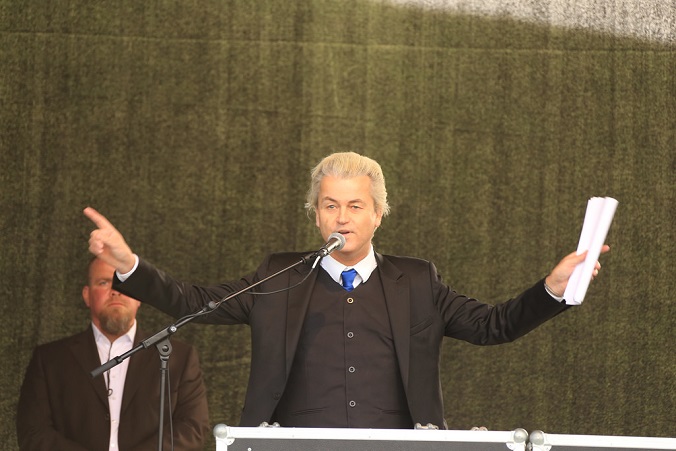 Every country seems to have one of these politicians nowadays. Take a crazy blondish haircut, populism and some fierce anti-muslim rhetorics and voila: a leading rightwing politician. The Netherlands were one of the trendsetters in this sad category with Geert Wilders. And since he is trailing ahead in the Dutch polls we better take a look at his party program: an one-pager calling for the ban of mosques and the Koran.

Well, I guess we don’t need to wonder what his stance is on the Burkini.

In a slam dunk against intellectualism, Wilders released his new manifesto on Facebook in August. Pushing it to the limits of the attention span of his following by spending a whole whopping page on it. The headliner is ‘NETHERLANDS AGAIN OF US’ (freely translated) and besides a ban of mosques and the Koran it also calls for no more refugees, a #NEXIT and no more money for leftists hobbies such as sustainable energy, innovation and enzovoort.  (enzovoort or enz. is the Dutch word for etcetera). Sadly, a proposal for free beer for all was missing.

Why Wilders proposal could say anything

Obviously, since Geert Wilders is far ahead in the Dutch polls, there was some upheaval about the manifesto. But not that much as one would expect, and the general tendency of the criticism was aimed at the shortness and tone of it. So why aren’t the Dutch (the ones that aren’t bigotry idiots at least) fearing that their little Kingdom will be turned into the Fourth Rijk after the next elections? Well, lots of reasons, but here are three important ones.

#2. Nobody wants to work with Geert Wilders
To even get into the government Wilders would need 2 or more coalition partners to make the needed 76 seats. Pretty much no one wants to be in a coalition with the Dutch Trump. And even if the ‘liberal’ VVD and the Christian Democrats break their word again and jump into a coalition with him they will not allow for such measures as proposed by Blondie. Compromising is what makes Dutch coalitions…

#3. Even Geert Wilders isn’t serious about the program
Just like banning mosques, #Nexit, bringing back the gulden and the Dutch football teams winning every tournament every 2 years, it will never happen! (note: this article will come back to haunt me when we have Premier Wilders installed in spring ’17)  Wilders knows it and the people who will vote for him know it as well. They don’t care either. The program just sets the tone: if you’re anti-islam then vote for Wilders. Nobody from the PVV cares about the direction of our educational system or Dutch infrastructural projects – they just want to indicate that they’re against foreigners and especially muslims.

Why this is still a stupid stupid thing

Apart from the fact that a quarter of the population will vote for this blonde racist this whole thing is also bad for (you will not see this coming): anti extreme-islamism.

Before you pull out that racism card, please let me elaborate and note that I don’t have a problem with regular old Rachid and his lifestyle of praying and no-pork. Heck, if you want to wear a stupid Burkini on the beach go right ahead – free country!

But I do have a problem with the new spur of homophobia caused by street youths influenced by extreme islam. I want to see extremists salafist mosques closed because they inspire violence and hatred. I also despise that the rise of Wilders has paved the way for an equally stupid and hateful party on the immigrant side called DENK. I think that the Dutch government should stop tolerating the religious affairs office of dictatorial Turkey to operate in the Netherlands and I loathe that young girls are socially forced into wearing a headscarf by muslims who are just as retarded as Wilders and enzovoort and etcetera.

The societal problems stemming from certain parts of the conservative islamic-community are serious and complex issues that aren’t going to be solved by a one-page manifesto full of racist slurs. It will take years of thought development and serious discussion which is difficult enough to keep doing without the stigmas and godwin’s. If anything, people who want to seriously discuss these issues (like yours truly) are going to be held back because one doesn’t want to be associated with a fundamental idiot like Wilders.

What do you think? Are Wilders his plans what’s needed to counter Islam? Or totally not a problem in Western society? Feel free to drop a comment anywhere!

Previous articleRaving Rotterdam: Scenes from the Dutch city of Cool
Next articleAmsterdam and Airbnb: Now Only 60 Days a Year